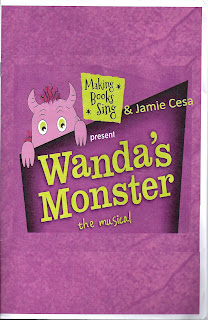 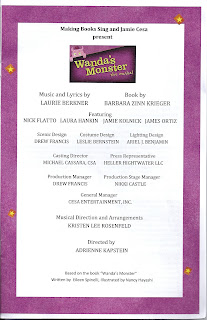 On Friday, July 19, at 10:30 a.m., a day before my 73rd birthday, I entered my second childhood when I visited the Vineyard Dimson Theatre on E. 15th Street to see WANDA’S MONSTER, effectively staged by Adrienne Kapstein. This is a musical version of a popular 2002 children’s book by Eileen Spinelli, with music and lyrics by Laurie Berkner and a book by Barbara Zinn Krieger. Only around 25 people were present in the audience, the majority of them preschoolers, some of them looking as if they had just popped out of the oven. TV comic actress Rachel Dratch was in my row with her tiny tot taking part in whatever little activities the actors asked of the children.


It’s hard to critique a show like this, since it’s geared for such a young audience. Perhaps the best gauge of how well it’s working is to watch the reaction of the kids. Although this was definitely not the most clever or imaginative children’s show I’ve seen over the past year, it worked its spell just fine and, aside from the usual dashes to the bathroom, the little ones were good as gold.


The 60-minute show, much of which is sung to sprightly pop tunes and simple lyrics (“Monster Boogie” seems to be well known), is about five-year-old Wanda (Laura Hankin, who’s actually a young woman), who talks to her stuffed animals, which she thinks are real, and who is afraid of the  monster she thinks is living in her closet. I’m sure a lot of people reading this are going to think Spinelli’s stolen their story since most of us have had similar fantasies in our early lives (and many of us still have them).  Wanda’s eight-year-old brother, Bobby (Nick Flatto, another grownup actor), is the designated cynic, and Granny (Jamie Kolnik) is her big support. No parents are visible in Wanda’s world, although we know they disapprove of her fantasies. The monster (amusingly played by James Ortiz) is a big, purple, fluffy, clumsy, shy, Maurice Sendak kind of guy, with large horns and long claws; he’s the kind of shy critter who’s more afraid of his own shadow than anyone could be of him, making him just the sort of fearsome thing that kids need to lovingly embrace if they’re going to fall asleep at night.


Bobby, unlike any 8-year-olds I’ve ever known, wears a bowtie and skinny jeans, while  Granny is unlike most grannys any kid seeing this show is likely to have met; she’s a hot-looking, Joan Jett-type biker chick rocker in zebra-striped tights and a black leather jacket. This is an innovation not in the original book, where Granny is more conventional. But she belies her image by saying things that ease Wanda’s anxieties and getting her eventually to bid her monster farewell. She also opens the show with a medley of songs accompanied by two male backup singers.


The show, presented by Making Books Sing, looks like it’s built to travel. The set is sufficient to establish we’re in Wanda’s bedroom, and the closet is a framework structure that can turn around so we can watch the monster while he’s in it. The costumes are bright and cheerful (although I wish the kids’ clothes looked more like what kids those ages really wear), and the monster makes a big impression on the tots. So if you’ve got a theatergoer in the making around, you might want to boogie him or her down to see the monster on E. 15th Street.
Posted by Samuel L. Leiter at 11:20 AM