With the awards season rushing headlong to its conclusion in late April, there’s little time available to review all shows seen at length. Here are thumbnails of three I caught over the last week.


AMALUNA is the latest in the Cirque du Soleil franchise to visit Flushing Meadows’s Citi Field, where it’s ensconced in a huge blue and yellow striped tent in the parking lot adjacent to the Mets baseball park. Its theme is based on Shakespeare’s THE TEMPEST, which it freely reinvents so that Miranda (Ikhertsetseg Bayarsaikhan)  a girl who lives on a magical island ruled by her mother, Prospera (Julie McInne), and protected by the lizard-man Cali (Viktor Kee), falls in love with the first man she ever sees, the handsome Romeo (Evgeny Kurkin). Changing Shakespeare's Prospero into Prospera emphasizes the notion of female empowerment, also underlined by the many female goddesses and spirits that inhabit the island. This is all that’s necessary to justify remarkable feats of aerial acrobatics, pole climbing, balance, gymnastics, teeterboard derring-do, juggling, and so on. Most of these acts are familiar in different guises from other shows, of course, but the theatrical sensibility that weaves them into Cirque's unique aesthetic makes them work no matter how often you've seen them. 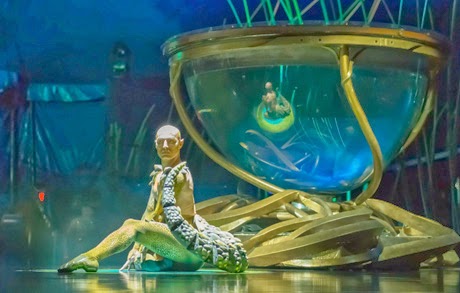 AMALUNA company.
As expected, there are dazzling costumes (by Méredith Caron), amazing lighting (Matthew Larivée), mesmerizing sound (Jacques Boucher), hypnotic music (Bob & Bill) with "lyrics" in a made-up language, and splashy choreography (Karole Armitage, aided by acrobatic choreographers Debra Brown, Caitlin Maggs, and Rob Bollinger). There are, of course, clowns, these being Natalie Claude as Jeeves (a shipwrecked 18th-century sailor whose mustache extends horizontally to either side like a pair of chopsticks), and Shereen Hickman as Deeda. Their humor, as per most Cirque shows, is broad and barely verbal (they speak in semi-gibberish). Under the direction of Broadway helmer Diane Paulus, the exquisitely designed show, with its peacock feather motif (designed by Scott Pask), has a visual and atmospheric integrity that render it memorable. 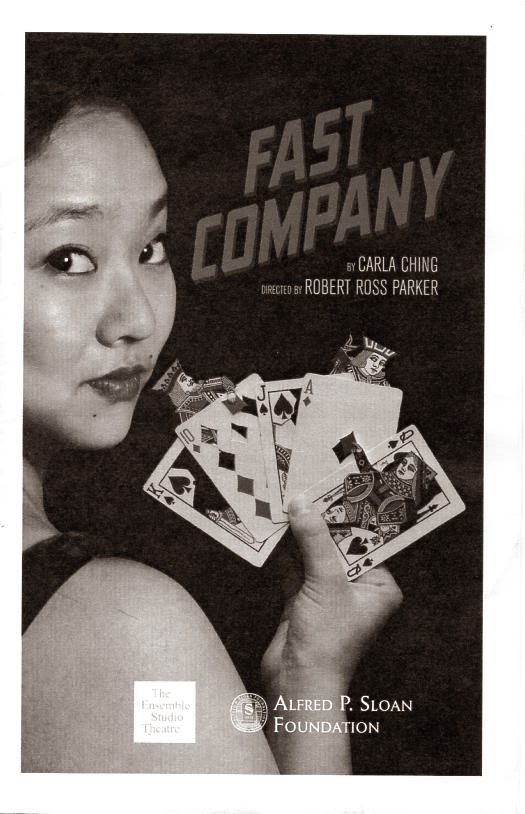 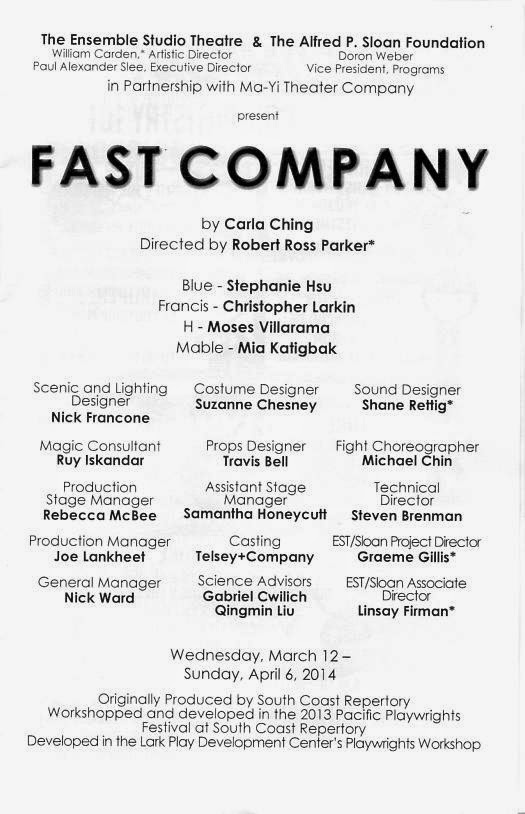 Carla Ching’s FAST COMPANY, directed by Robert Ross Parker at the Ensemble Studio Theatre, is a fast-paced, well, acted, one-act comedy about a family of Asian-American grifters headed by the famous con artist Mable Kwan (the excellent Mia Kiatigbak), who is ruthless in her demands on what she expects of her crooked kids. Daughter Blue (Stephanie Hsu), considered by her mom less than suited for the con artist’s profession, has learned game theory in college, hoping to use it to pull of some major con, and when she begins to use her skills to obtain a copy of Action Comics #1, the most expensive vintage comic in the world, problems arise. Blue has to deal with her quarrelsome, competitive family, which includes two brothers. Francis (Christopher Larkin), who seeks a career doing David Blaine-like endurance stunts, and H (Moses Villarama), who broke the family code by stealing the comic to pay off his debts to a hoodlum. 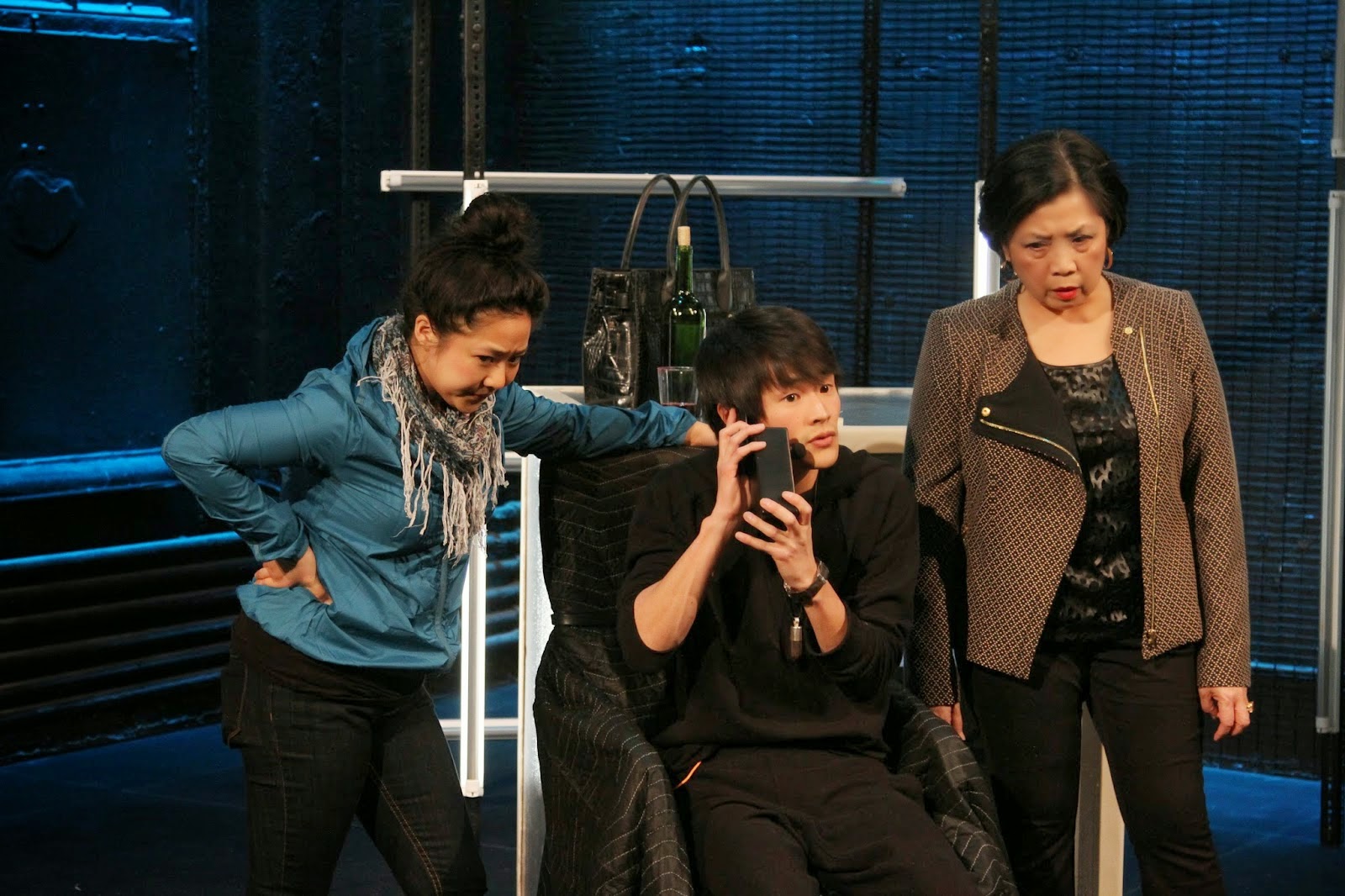 The set is a simple arrangement of fluorescent lighting strips and projection screens on which titles listing various examples of grifter lingo are posted during the action, which is kept moving by the nimble company of four. Still, it’s hard to get involved in the family dynamics that play fast and loose among these artificial characters, and, while I appreciated the give and take necessitated by one con artist trying to outdo the other, I found no emotional connection with the 90-minute piece. 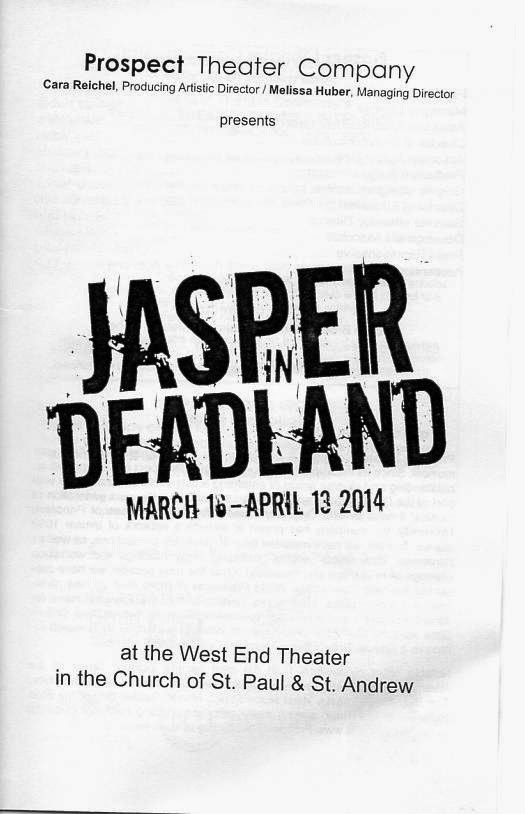 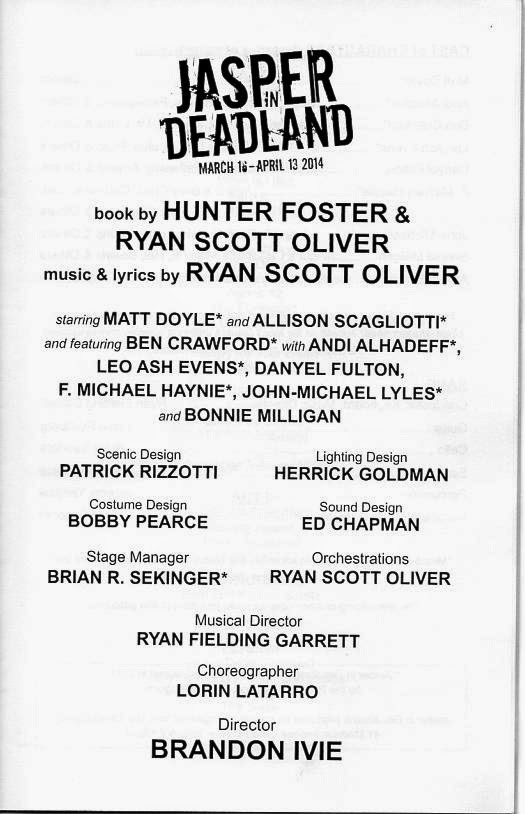 JASPER IN DEADLAND, the latest musical offering by the resourceful Prospect Theatre Company, is at the West End Theater in the Church of St. Paul and St. Andrew, where Patrick Rizotti's setting, well lit by Herrick Goldman, effectively makes use of the classical columns that form part of the architectural décor. The script is by Hunter Foster, the Broadway star (currently in THE BRIDGES OF MADISON COUNTY) and Ryan Scott Oliver, who also wrote the lyrics and music. Brandon Ivie is responsible for the clever staging, which makes the apparently low budget go a long way. 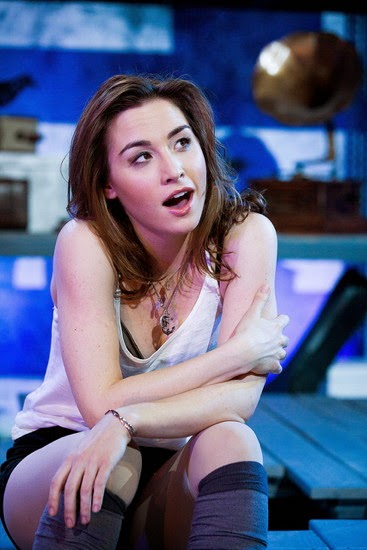 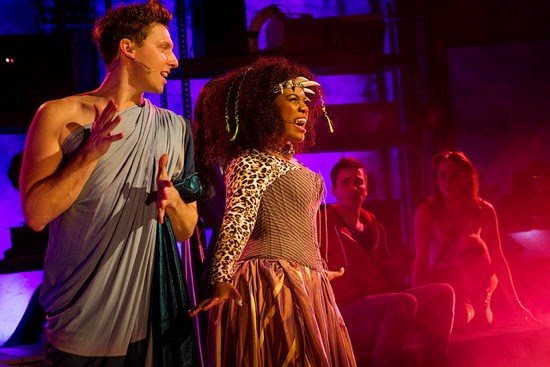 The show is a retelling in modern terms of the mythological story of Orpheus and Euridice; a recently depressed high school boy, Jasper (Matt Doyle), goes to hell (Deadland) to bring back a girl named Agnes, who died when she dived off a cliff in an effort at showing him life's promise. In Deadland, a modern, cosmopolitan city, he undergoes various trials, including a confrontation with the three-headed dog Cerberus (played by three actors with huge puppet heads); he must also confront the efforts of a powerful billionaire, the wicked Mr. Lethe (Ben Crawford), to recruit him. The show has received several rave reviews, and I wish I could have loved it, too, but I found the characters too exaggerated, the rock-inflected music (apart from a few exceptions) too relentlessly loud and percussive, the lyrics too muddled, the humor too blunt, and the show (at two and a half hours) too long. But I can't deny that the cast of nine is terrifically enthusiastic, the staging inventive, Bobby Pearce's costumes imaginative, and the energy unflagging. Matt Doyle and Allison Scagliotti make an adorable and talented romantic couple, and the supporting company includes some big voices and versatile performers. Ms. Scagliotti, I might add, would make any red-blooded guy venture into hell to get her back.