GREED: A MUSICAL FOR OUR TIMES 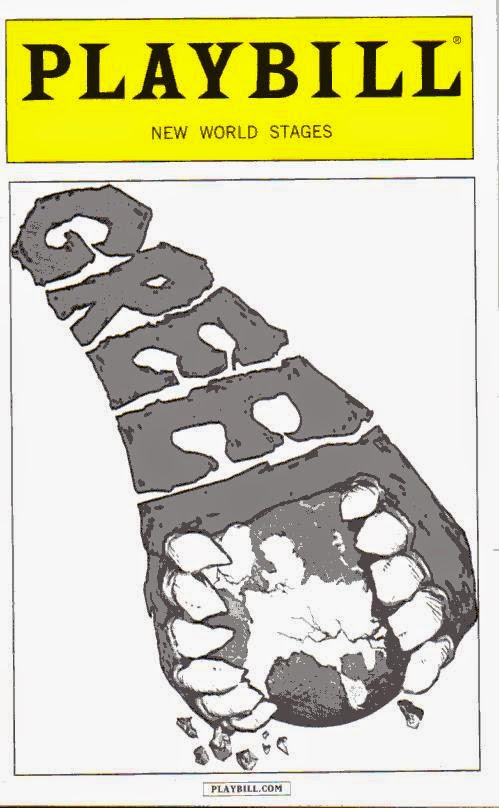 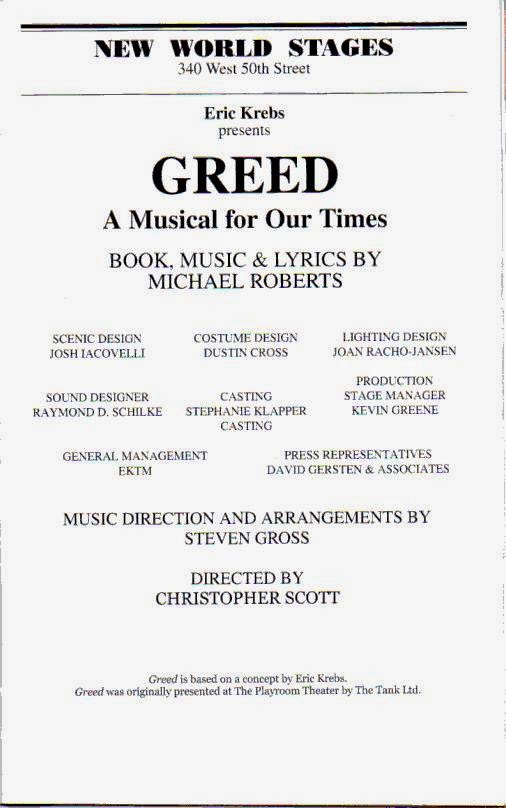 From Plautus’ THE POT OF GOLD to Molière’s THE MISER to Martin Scorcese’s THE WOLF OF WALL STREET, greed has long provided a rich vein of comic and serious ore for theatre and filmmakers to mine. Only within the past week or so, New York has seen the opening of such greed-related shows as THE THREEPENNY OPERA and THE HEIR APPARENT. The subject is now the heart of a satirical revue, GREED: A MUSICAL FOR OUR TIMES, directed by Christopher Scott, at New World Stages. The book, music, and lyrics are by Michael Roberts and the 85-minute intermissionless show--a best musical winner at the 2006 NYC Fringe Festival--features four performers, two men and two women. The ladies are Julia Burrows and Stephanie D’Abruzzo; the men are James Donegan and Neal Mayer. Each is pleasant and moderately talented, but none stands out either for comic or vocal distinction; less shrillness and fewer flat notes might have helped.

The producers haven’t spent much money on sets or musicians, depending mainly on Josh Iacovelli’s arrangement of black velvet curtains for the background, and an onstage pianist and percussionist seated at stage right for the music. There are some clever lyrics in the songs, but not all of them are on the same level, and an hour and a half of song after song about covetousness verges on overkill.

One routine, “Financial Advisor,” has a couple visiting such a specialist only for the seemingly dumb blonde wife (Ms. Burrows) to know more about the subject than the jargon-spouting advisor (Ms. D’Abruzzo). There’s a bit about a jealous man who thinks his friend has everything better than him; another, “When I Saw the Doctor,” about medical greed; and one, “Inside Information,” about inside trading. “A Little Juice” is about steroid use in sports, with three performers sticking their heads atop cardboard paintings of muscle-bound athletes (one in a Yankees uniform), while “The Ballad of Jamie Dimon,” done as a cowboy song, describes the avariciousness of that billionaire.

A Dolly Parton type (Ms. Burrows) boasts in “Another Kid” about making money off the federal welfare state by having illegitimate children, and then, in the show’s most tasteless bit, sings about plotting to have a disabled kid to make even more. The Catholic Church is blasted for seeking monetary power at the expense of doing “God’s Work,” while art patrons are skewered in “It’s Mine,” a song spread through the show in three parts sending up different aspects of the theme. People who have accidents in public places like malls are sent up in “Slip ‘N’ Fall,” and Ponzi scheme mavin Bernard Madoff, already knocked (indirectly) this season in THE UNAVOIDABLE DISAPPEARANCE OF TOM DURNIN and THE COMMONS OF PENSACOLA, gets his comical comeuppance in “It’s Bernie.” Madoff may be worth a thrust or two for bringing Ponzi schemes back to public attention, but the original Ponzi himself gets his own number, “Charlie’s Song.” And, of course, what’s a show about modern greed without taking the knives to mortgage fraud in “Passing the Mortgages.”


There haven’t been many revues this season, Off or on Broadway, and, apart perhaps from AFTER DARK, those that have appeared mostly have been second-rate. Sort of makes one greedy for another edition of FORBIDDEN BROADWAY, wouldn’t you say?
Posted by Samuel L. Leiter at 8:31 AM