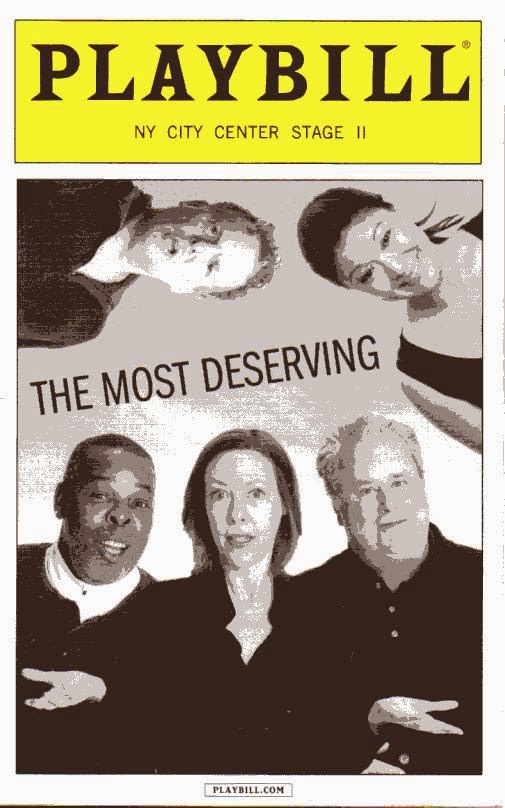 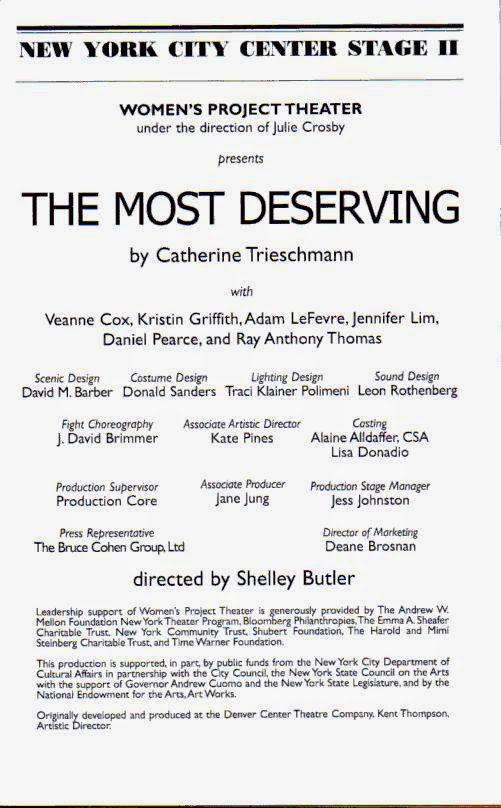 Caroline Trieschmann’s THE MOST DESERVING, the latest offering from the Women’s Project, located in City Center’s Stage II venue, is an amusing, if cartoonish, comedy that seeks to shred the politically correct circumstances surrounding arts grants and funding. It shoots some spiky barbs into the process, with broadly drawn characters representing an arts council in a small town in Ellis County, Kansas. They consist of Edie Kelch (Kristin Griffith), a wealthy, recently widowed arts patron; Dwayne Dean (Adam LeFevre), a man who turned to art when he lost his job; Liz Chang (Jennifer Lim), an ambitious Asian-American art historian who keeps boring everyone with reminders that she has an M.A.; Ted Atkinson (Daniel Pearce), a middle-aged, British-born reporter; and, most memorably, Jolene Atkinson (Veanne Cox), Ted’s wife and the chairperson of the committee. The group’s makeup is highly questionable, but does provide a disparate assortment of eccentric personalities that gives rise to several risible situations. 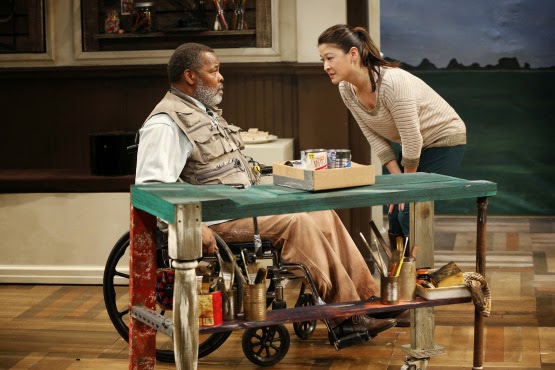 The council is deliberating over the granting of $20,000 to the winner of an arts competition, and the choice boils down to three artists, one of them being Rick Duffy, whom we never see but who is the son of a politician responsible for the council’s budget. This, of course, would immediately disqualify the son in any real competition, just as would the involvement of council member and award competitor Dwayne, who claims that what makes his art original is that he paints only vice presidents. Also, the presence of a husband and wife on the same small council would be a universal no-no. 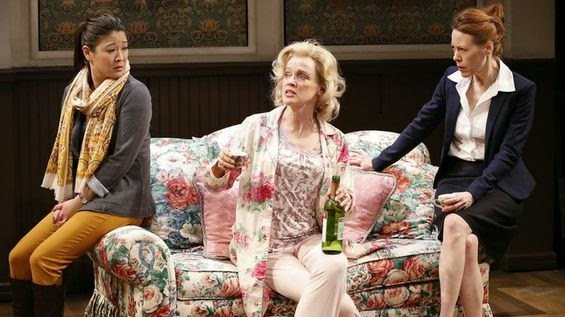 The most worthwhile artist, partly because he best satisfies the requirement that the winner be from an underrepresented group, is an indigent, wheelchair-bound, possibly crazy, black man, Everett Whiteside (Ray Anthony Thomas), whose candidacy is strongly supported by Liz, who hopes the book she says she's writing about him will get her out of Kansas. Everett creates religious sculptures from found objects, or what some call “junk.” A sizable chunk of the play’s humor is based on what constitutes a minority, with Rick Duffy’s claim to be 1/16th Sioux Indian countered by a claim Dwayne makes that gets one of the show’s biggest yocks.


The ensemble is quite good, with a special nod to Kristin Griffith as the glamorous blonde widow, but leading the humor brigade is the priceless Veanne Cox as the council chairperson, prim and proper on the outside but red hot in the bedroom when she tries to influence her husband’s vote for Rick Duffy—she wants to get his father to increase the council’s funding—by dressing in sexy lingerie and trying to seduce him. Jolene has the super-officiousness of a bureaucrat with an agenda who refuses to welcome any ideas contrary to her own, so when we see her other side, the results are hilarious.


Ms. Trieschmann’s play, briskly directed by Shelley Butler, walks an unsteady tonal tightrope as it shifts from office satire to bedroom farce to serious discussion (a scene between Liz and Everett), and some of the situations and characters are way too far-fetched for plausibility. For the most part, though, the production’s 90 minutes fly by swiftly and produce some of the loudest laughs you’ll hear this season.


David M. Barber’s set is adaptable to the multiple locales of conference room, artist’s studio, bedroom, and so on, and the costumes of Donald Sanders, the lighting of Traci Klainer Polimeni, and the sound design of Leon Rothenberg provide satisfactory visual and aural support.


I’ve sat on committees like the one poked fun at in THE MOST DESERVING, and appreciate the premises on which its satire is based, even if Ms. Trieschmann over-exaggerates for comedic effect. This may not be the most deserving play in New York, but it does deserve kudos for keeping the comic ball in the air so much of the time.
Posted by Samuel L. Leiter at 8:32 AM