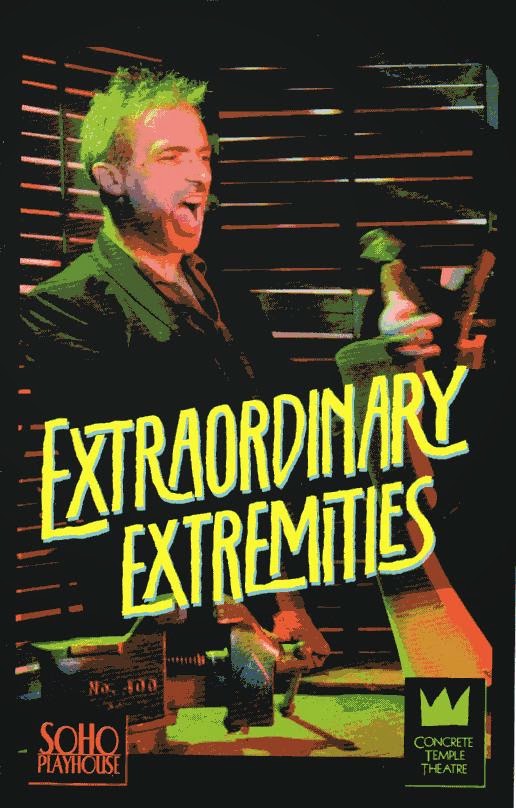 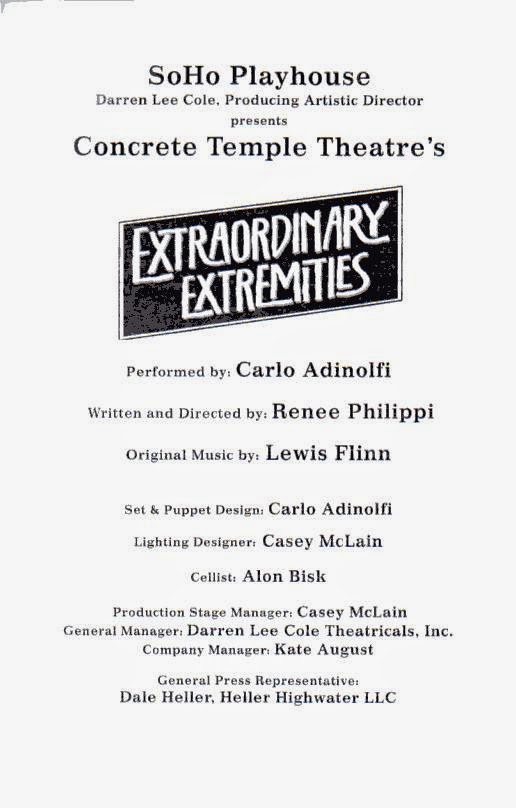 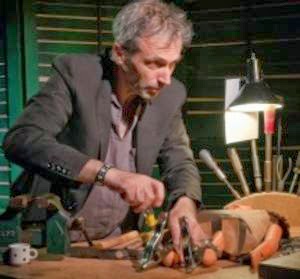 
Downtown at the Soho Playhouse on Vandam Street, puppet master Carlo Adinolfi is performing a solo piece, EXTRAORDINARY EXTREMITIES, inspired by an NPR story about Hugh Herr, and produced by the Concrete Temple Theatre. According to the program, he’s a “biomedical engineer whose legs were amputated after a climbing accident and who now designs technologically advanced artificial limbs. Hugh himself has over twenty different pairs of feet: ‘I feel fortunate that I can always look forward to having better and better feet.’”  The hour-long piece, played in a simple set (designed by Mr. Adolfini) of green standing screens with puppets and tools hanging from the slats, and with a workshop table at center, has a text by Renee Philippi, who also directed. There’s also insistently moody cello music by Lewis Flinn played onstage by Alon Bisk, who accompanies the entire performance. Ms. Philippi was a graduate directing student at Brooklyn College when I was teaching there; she and Mr. Adinolfi are co-artistic directors of the Concrete Temple Theatre.

Mr. Adinolfi, a slender, lightly bearded man with salt and pepper hair, plays Geppetto, a puppeteer whose wife, Donna, has either left him or died (it's not clear) and who must prepare his puppets for an upcoming performance of Geppetto and Donna's Mythic Puppet Company without her assistance. This forces him to create various scenarios with his two main puppets, a man and woman, as he tries to find the right material for him as a newly solo puppeteer. Their premises are based on classic myths, such as that of Perseus, Andromeda, and a sea monster. The male and female puppets have carved heads and articulated limbs, with their limbs manipulated by holding them like ordinary dolls and not with strings. The sea monster is a glove puppet. Geppetto talks to himself and to the puppets, which he treats as if they’re living beings, much as a child might talk to their Barbie and Ken as they moved them about in their bedroom. The tale of Menelaus and Helen is introduced, and then we get to the story of Orpheus and Eurydice (also represented by the new musical JASPER IN DEADLAND, seen earlier in the week). Given its tale of a man who goes to Hades to retrieve his late lover, and his ability to perform it solo, this story proves the most appropriate to his personal and technical circumstances.


During the course of his frustrating exertions, Geppetto’s male puppet’s leg breaks, so he amputates both by sawing them off and replacing them with clamps and metal tools (including a pair of ratchets). None of this has anything literal to do with Hugh Herr’s story, and there are no references to amputees, so without reading the program there’s no way you’d know that artificial limbs used by humans are the premise of the performance. But you may take away a lesson about the puppeteer’s unstinting efforts on behalf of overcoming whatever obstacles he encounters, although you no doubt have been in situations yourself where, when something you were working on broke, you found alternative solutions to overcome the crisis. Regardless, I was baffled about why I should be concerned about a puppet’s disability when a broken limb can be so easily replaced by carving another one. Any feeling of sympathy fades radically when one considers the plight of humans and animals in similar situations, especially with this week’s episode on TV’s “Nature,” about prosthetics for pigs, horses, dogs, swans, and so on.


EXTRAORDINARY EXTREMITIES is something kids might appreciate; adults, maybe not so much. The dramatic circumstances are thin, the puppets are nothing you haven’t seen before, and the puppetry not especially memorable, although Mr. Adolfini definitely conveys great love and affection for his creations, and there are moments when, if very subtly, he is able to infuse a sense of life into his wooden actors.
Posted by Samuel L. Leiter at 9:10 AM