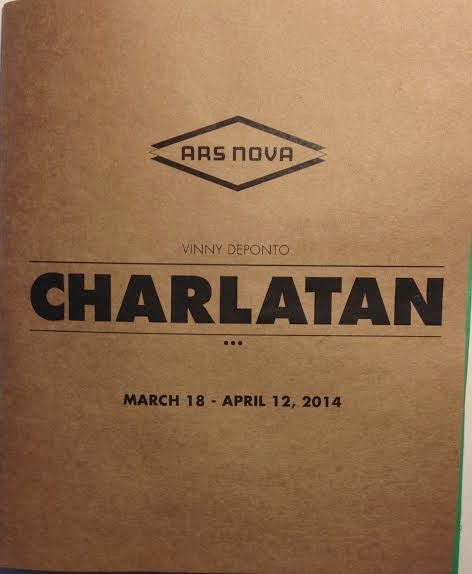 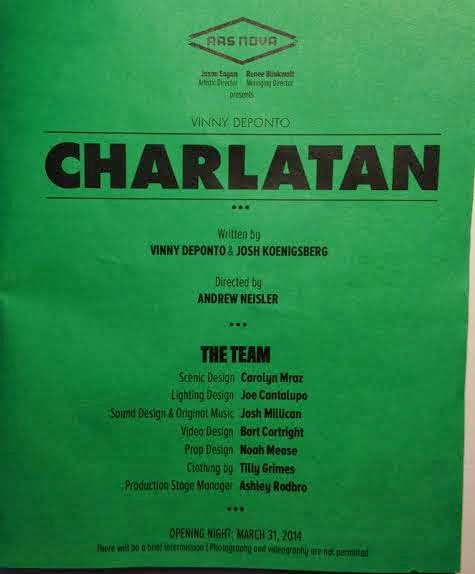 Brooklyn-based magician and mentalist Vinny DePonto is offering a heavy-duty mind-bending, mind-blowing demonstration of the art of deception in CHARLATAN, his one-man show at Ars Nova. If he’s anything, this soft-spoken, slender, dark-haired 27-year-old is certainly not what the title of this play suggests. Mr. DePonto is the real thing, not a charlatan, although he could conceivably use his considerable skills to trick you out your money and possessions.


When you first arrive at Ars Nova, on W. 54th Street between 10th and 11th Avenues, a shlep and a half from the nearest subway, you’re given a card on which you’re asked to write a lie about yourself, albeit one that falls within the realm of believability. You then fold the card, place it in a small envelope, write your first name and the initial of your last name, and drop the envelope in a box's slot at the front of the stage. Later, your card will be among the many that Mr. DePonto will place before him, and if you’re lucky (or unlucky) enough for him to open your envelope, you’ll be amazed by what he determines about your personal veracity. Before he gets to this remarkable part of the show, which runs a bit less than two hours with one intermission, he runs through an assortment of “how’d he do that?” routines, including a number of card tricks made visible by someone videoing them so they can be seen on two monitors affixed above the stage. You may recognize these bits from other magic acts, just as you may have seen a variation of the trick where he blindfolds himself and has a volunteer maneuver a  piece of fruit and three paper cups into  a random arrangement. One cup has a spike inside. Mr. DePonto, thoroughly unable to see, then stands over the cups and fruit and smashes a hand down over each of the non-lethal cups, flattening them. He removes the tape over his eyes and the bandages wrapped multiple times around his head to display the spike, onto which he thrusts the fruit to show how sharp it is.


During the evening, Mr. DePonto offers audience members a chance to select one of a number of colored envelopes; choosing the right one will give the person a shot at winning $500. (Listen carefully to the offer.) By the end of the evening, of course, no one has chosen the right envelope, and I’m sure that even if some reviewer revealed which color was the winner when he attended, it wouldn’t matter at all, since Mr. DePonto seems ready to handle all contingencies in his quest to deceive. Also over the course of the evening, he elicits three numbers, beginning with his weight, which he writes on a small blackboard. When an audience member is called up to open the remaining envelope, those numbers will be used in a way that will cause you to blurt “Oh, my God!” or some equally blasphemous or salty phrase of disbelief.


The staging and presentation of CHARLATAN lack the visual appeal and theatrical polish of NOTHING TO HIDE, the illusionist show done earlier this year at the Signature Theatre under Neil Patrick Harris’s direction. That show also employed audience participation, but to a much slighter degree than this one. CHARLATAN is cowritten by Mr. DePonto with Josh Koenigberg, who penned last season’s THE MNEMONIST OF DUTCHESS COUNTY. The director is Andrew Neisler.
Mr. DePonto, a slightly built fellow, wears a black suit, shirt, and tie. He’s a little too soft-spoken for my tastes, and, with my somewhat imperfect hearing, I had to struggle to catch some of his patter. Carolyn Mraz’s set, lit by Joe Cantalupo, is a nondescript office-like space with lots of pictures pinned and taped to the walls; it resembles what you’d see on a detective’s wall with images used to solve a crime. At the end, however, when the set undergoes a black light transformation, whatever mind you still have left will be exploded again, only for Mr. DePonto to spring one final illusion that will send you swirling into the street outside knowing you’ll never figure out how he did what he did, but that, however he did it, it won’t soon be forgotten.
Posted by Samuel L. Leiter at 2:14 PM