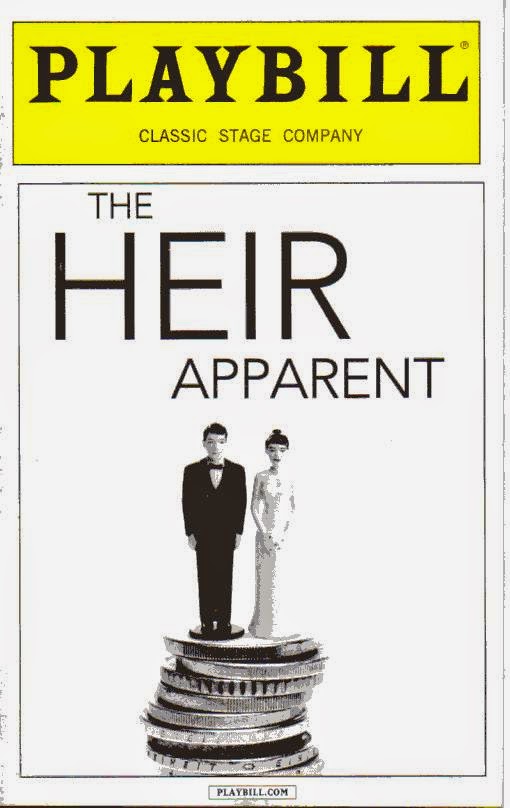 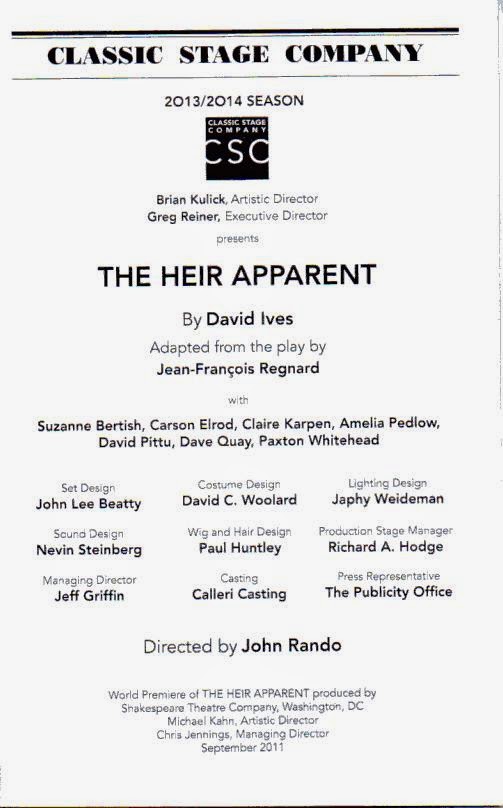 THE HEIR APPARENT, playing at the CSC on E. 13th Street, is an adaptation (the word “translation” appears nowhere in the credits) by master comic dramatist David Ives of Jean-François Regnard’s 1708 farce LE LEGATAIRE UNIVERSEL. The play exists in a 1912 translation by Stark Young and a more recent one from 1986 by Freyda Thomas called THE HEIR TRANSPARENT (as well as SPLITTING HEIRS), which Ms. Thomas terms “an original play in verse loosely based on” Regnard. The only previous production of Regnard’s play in New York was in 1924 when it received a single performance, in the original French, by the visiting Comédie Française. Regnard was a devotee of Molière, especially of his commedia influences, which are very much in evidence in THE HEIR APPARENT. Like Thomas, Ives has cast his adaptation in rhymed verse; he also has maintained the play’s original period while tossing anachronisms around like croutons in a Caesar salad. I’ve seen only a sample of Thomas’s version, so I don’t know if she uses as many scatological references as does Ives, who not only includes lots of dialogue about ordure, enemas, piles, and farting, but even has a clock that includes the sound of passing gas before each hour is struck. 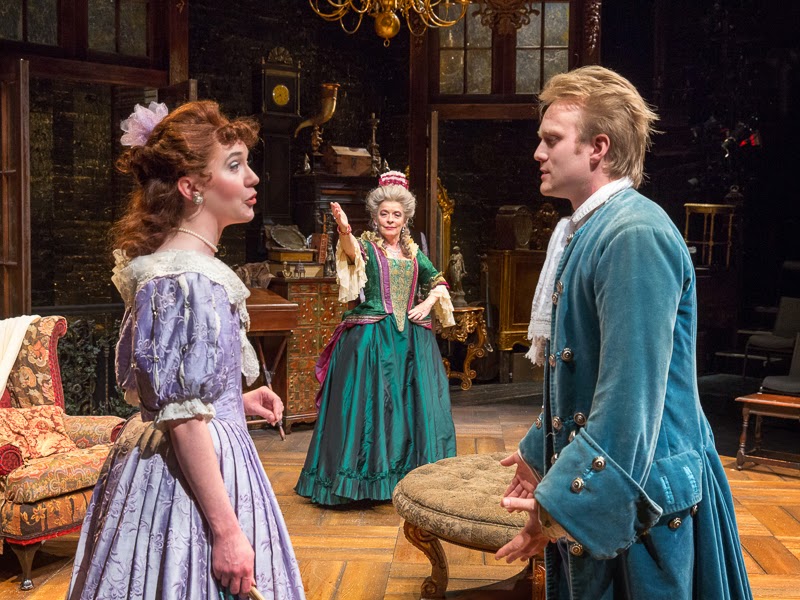 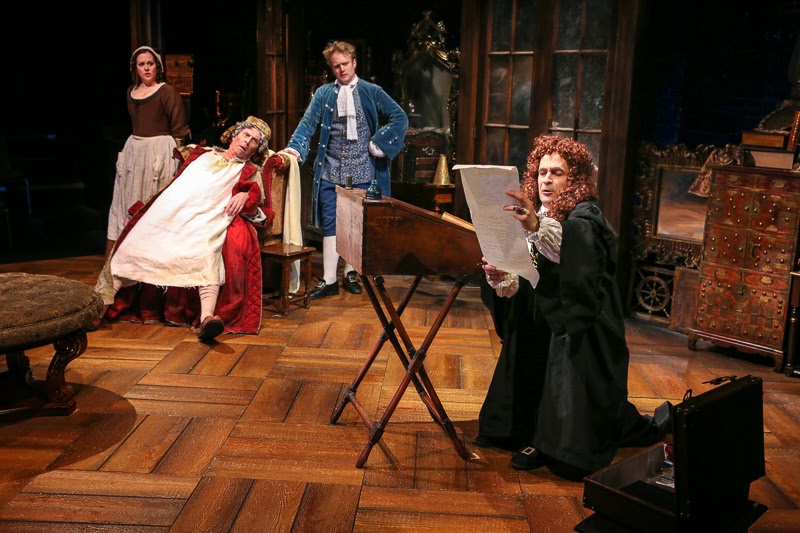 With a nod to THE MISER, the play, which observes the unities of time, place, and action, is set in the chateau (beautifully designed by the incomparable John Lee Beatty) of the very wealthy but decrepit old miser Geronte (Paxton Whitehead). We meet the familiar Figaro-like servant Crispin (Carson Elrod), who seeks to help his master, Eraste (Dave Quay), inherit Geronte’s estate and thus enable him to wed the beautiful and wealthy Isabelle (Amelia Pedlow), when her mother, Mme. Argante (Suzanne Bertish) rejects him, and Geronte declares he will marry her himself. Crispin’s scheme, in Ives’s playful and witty recreation, involves him masquerading as an American frontiersman from New York (coonskin cap and all, courtesy of costumer David C. Woolard’s fertile imagination) and, in drag, as Geronte’s niece. The ailing Geronte, meanwhile, seems to have passed away, but he keeps coming back to life; during one of the old man’s deathbed episodes, Crispin disguises himself as Geronte in order to fool the tiny lawyer Scruple (David Pittu, playing the role on his knees) into writing a new will favoring Eraste, while providing Crispin with an annuity, and giving the servant girl Lisette (Claire Karpen) money on the condition she wed Crispin. This leads to a scene in which both the real and fake Geronte appear on stage simultaneously, creating riotous confusion. Ultimately, Geronte has a change of heart, recovers from his illness, appears in a fabulous silk suit, with long silver wig, and all ends happily.

From left: Dave Quay, Carson Elrod, Claire Karpen. Photo: Richard Termine.
This familiar bundle of conventional plot elements is perfectly suited to Ives’s sense of humor and is taken full advantage of by the humorously inventive staging of director John Rando and his team of capable actors and designers. For perhaps the first third of the play, the enjoyment level stays high enough so that we continue to appreciate all the broad slapstick devices, but eventually the persistently high spirits, spritely pace, linguistic deviltry, and cartoon characters wear a bit thin. Mr. Ives’s adaptation plays fast and loose with modern-day allusions; be prepared to hear references to Godzilla, kemosabi, the National Health Insurance, and the 99 percent. There’s also a good deal of profanity, including lines like, “You will have fucked yourself in royal fashion.”  F.U., of course, makes a perfect rhyme with nephew. Comedic bits of staging abound, such as a character’s lighting an ancient chandelier’s candles with a remote.
From left: Paxton Whitehead, Carson Elrod, Claire Karpen. Photo: Richard Termine.
Crispin, the energetically crafty manipulator who moves the plot along, needs to have a lighter touch than Carson Elrod gives him; we get his cleverness, but he pushes too hard to be really funny. Most of his fellow players are competent enough, but the truly deft farceurs who raise the performance to another level are Paxton Whitehead, Suzanne Bertish, and, most especially, David Pittu as the elegant pint-sized lawyer, bedecked in a classic red periwig, who must bear up under a barrage of jokes about his size. 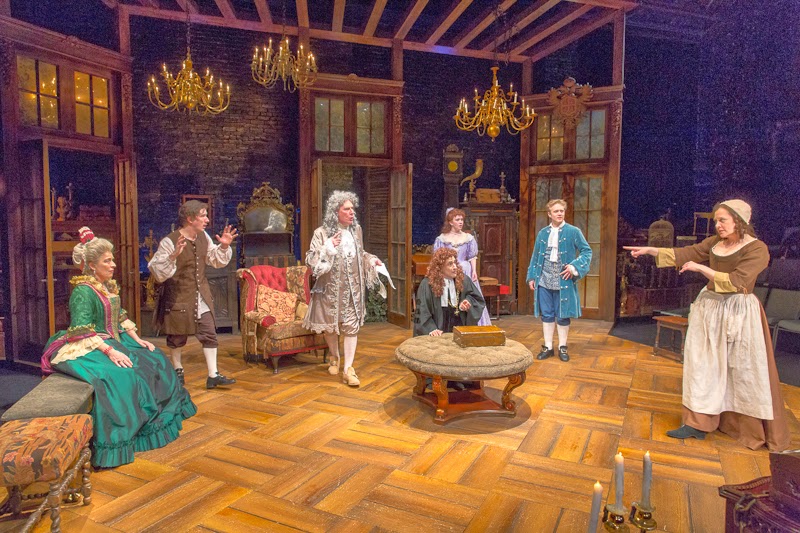 THE HEIR APPARENT, despite losing steam midway, is one of the better recent revivals of this type of play. A well-known critic and theatre historian acquaintance of mine exited the theatre at the end almost as if floating on air and asked if I felt as ecstatic as he about what we’d both just seen. He was distracted by someone else before I could reply, but if I’d been able to I would have said, “No, but that doesn’t mean I didn’t have a pretty good time anyway.”