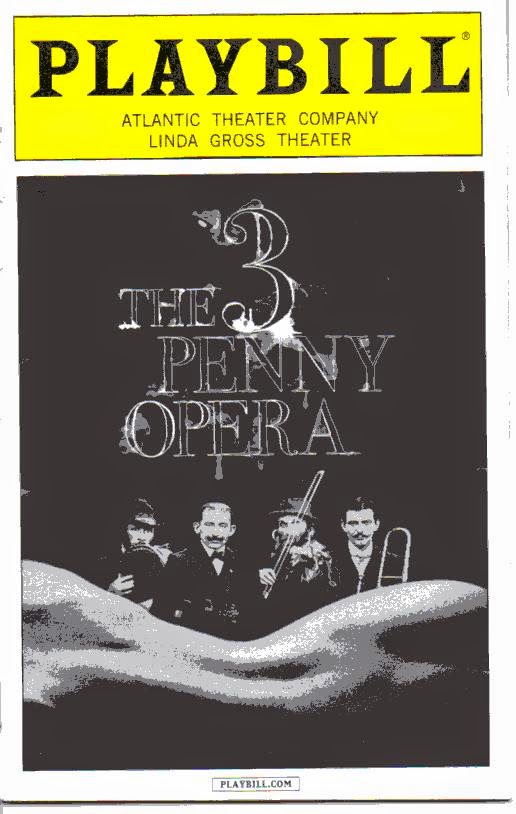 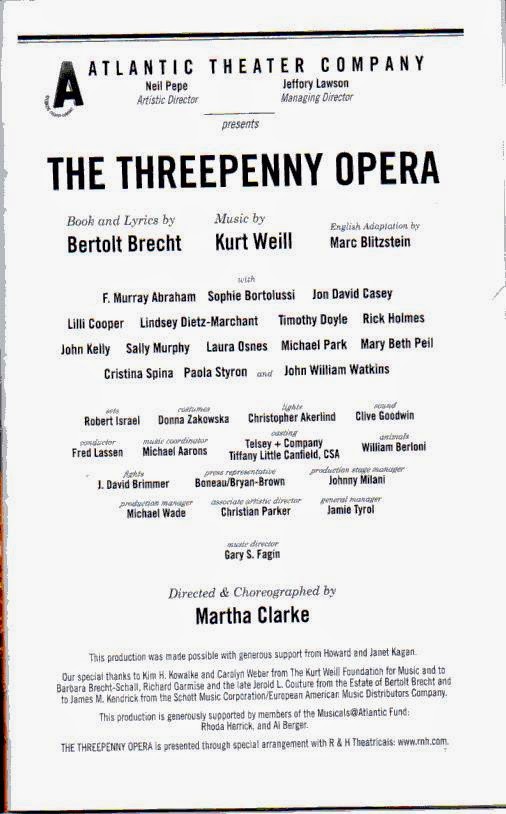 Ever since its resuscitation by Marc Blitzstein in 1954 at Greenwich Village's Theatre de Lys (now the Lucille Lortel Theatre), THE THREEPENNY OPERA has become one of the world's most frequently revived prewar musicals, even though written originally in German and produced in 1928 Berlin during the Weimar Republic. Its anti-capitalist script, by the then still internationally unknown Marxist playwright Bertolt Brecht, and its score, by Kurt Weill, were inspired by John Gay’s 18th-century THE BEGGAR’S OPERA, with the milieu updated to a fanciful late Victorian London. The de Lys version opened for 96 performances, was closed to make room for another show that had been booked into the venue, and, with public pressure building because of the 1954 revival’s critical success, reopened at the de Lys in September 1955; it played until December 1961 in what was then a record-smashing Off-Broadway run. The original cast included such still recognizable names as Bea Arthur (Lucy), John Astin (Readymoney Matt), Charlotte Rae (Mrs. Peachum), Jo Sullivan (Polly), and Lotte Lenya (Jenny). Lenya, Weill’s wife, had been in the 1928 production. Estelle Parsons, who opens this week in THE VELOCITY OF AUTUMN, was one of the replacement performers during the run. THE THREEPENNY OPERA has had several important reincarnations in New York since then, including a brilliant one in 1975 directed by Richard Foreman with Raul Julia as Macheath, and a dreary one in 1989 starring Sting. Now, with Martha Clarke directing and choreographing, the Atlantic Theatre Company is reviving this great show with Michael Park as Mack the Knife, F. Murray Abraham as Peachum, John Kelly as the Street Singer (who sings “Mack the Knife,” which I performed in a college production in 1962), Laura Osnes as Polly, Mary Beth Peil as Mrs. Peachum, Lilli Cooper as Lucy, Sally Murphy as Jenny, and Rick Holmes as Tiger Brown. Despite these talents, there are no truly standout performances because no one is believably sordid, despite dramatis personae who practically define corruption. Although Polly can get away with sounding refined, most of the rest of the cast lacks the grittiness of the characters they’re playing, and charisma is in short supply. Even the singing is only occasionally really excellent.

Robert Israel’s set of flat gray walls seeks to capture the semi-expressionist look associated with the period when the show was created, but is dull and colorless, while Donna Zakowska’s costumes, redolent of the late 1920s, often look too fashionable to be believable in this milieu. The overall impression is bland, made even blander by an ensemble of actors who bring little life to the minor characters. Just listen to how Macheath’s gang has been directed to squelch the life out of the usually hilarious “The Wedding Song,” with their pipsqueak “yays” and “hoorays.” Jenny’s big number, “Pirate Jenny,” brings little memorable to the table, and is weakened by busy choreographic movement in the background, while the show’s finale, when Macheath has been reprieved, is staged, inexplicably, with a bulldog dressed as Queen Victoria pulled across the stage on a small cart. Like most of the show’s other efforts at humor, this one lands with a thud.


Ms. Clarke’s direction is boring and ploddingly paced. There are, early in the show, several moments when she captures the decadent look of life among the whores, thieves, and pimps, but these flicker and die, leaving little illumination behind. One thanks God for the extraordinary score’s ability to withstand even a mediocre revival, and for that alone many will wish to visit the show. By and large, though, this THREEPENNY OPERA desperately needs a reprieve of its own.