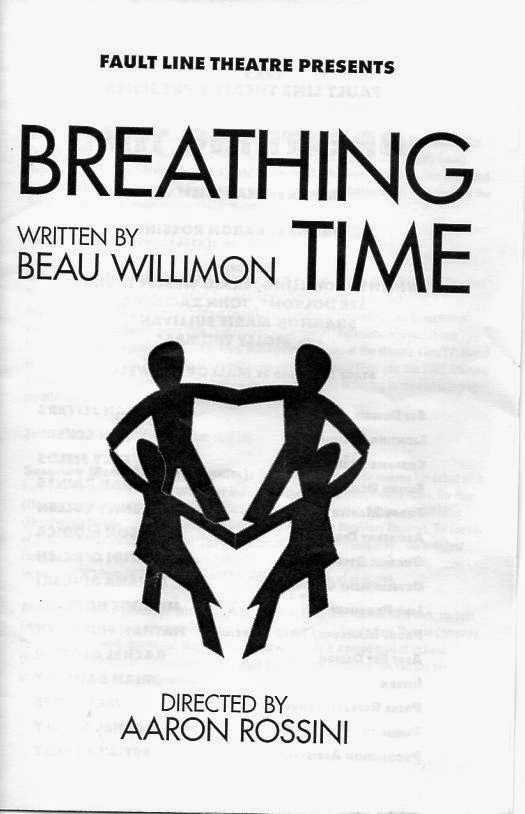 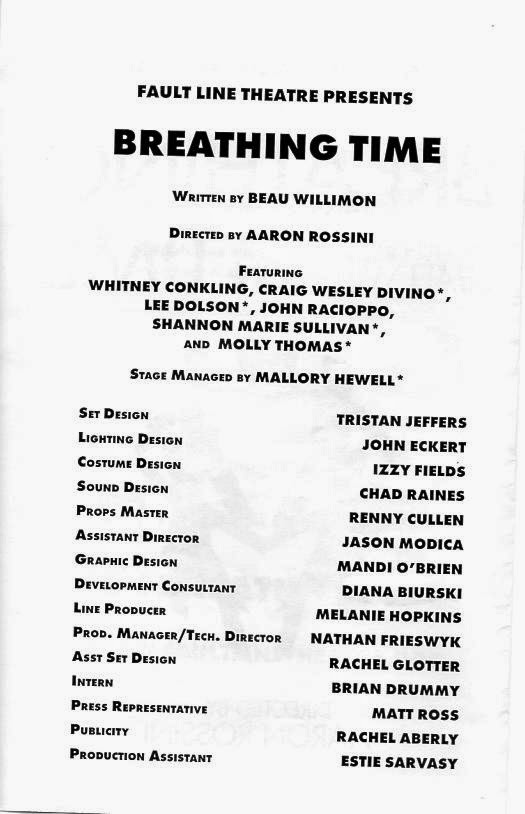 Beau Willimon, whose political play, Farragut North, became the George Clooney film, The Ides of March, and who became red hot as the writer-producer of the popular, award-winning Netflix series, “House of Cards,” is the very talented author of an engrossing, if thin, new play called BREATHING TIME, now playing at the tiny IATI Theatre on E. 4th Street. It’s a hard play to write about because its big shocker comes midway through, and, even though it’s the dramatic lynchpin, revealing it would be a serious spoiler. On the other hand, there are hints in the early part of the play that may lead some spectators to guess what’s up. 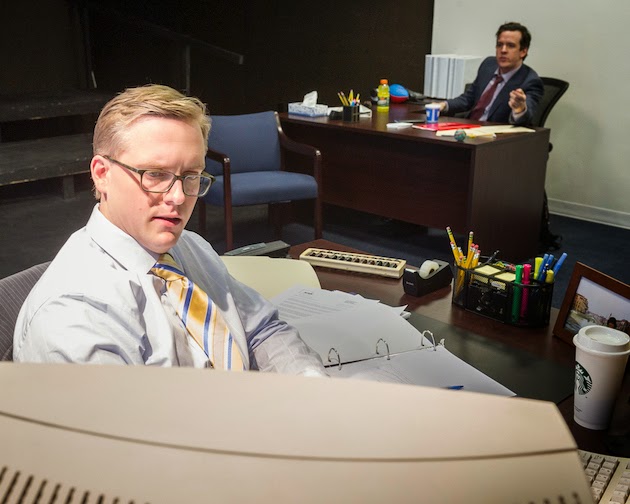 
Two men are in a high-rise office building, sharing an office (nicely designed by Tristan Jeffers) in the financial district. It’s early, a bit before the regular work day begins. One, the blonde, bespectacled Mike (Lee Dolson), is a numbers cruncher specializing in derivatives. The other, the dark-haired Jack (Craig Wesley Divino), is a marketing expert with a maverick streak. Although their specialties would normally never have them in the same office, the “big dicks” that run their firm are interested in seeing if Jack and Mike might actually be able to share their respective talents for a project Jack has in mind. The business talk suggests Mamet, and suggests we're in for another Wall Street expose.


Jack comes in to work early one morning drunk, sparking a lengthy conversation with Mike, who’s busy at his box-like computer monitor. Jack keeps up a running stream of chatter that gradually becomes highly revelatory about him, his Vietnam veteran father, and his dancer sister in Minneapolis. Each new bombshell he drops leads to disclosures from the apparently straight-laced Mike, some of which express aspects of him that surprise even the done-it-all kind of guy Jack seems to be. Jack’s revelations include a story about a ring embedded in his dad’s back as the result of a wartime incident that killed his leader. Mike finds the laughter with which Jack concludes the story unsettling, so Jack continues with the gruesome story in a more somber vein, underlining its horror.


One doesn’t quite know what to make of these men, especially the somewhat manic Jack, who also demonstrates Neil LaBute-like chauvinism in discussing the attractive Karen (Whitney Conkling), who works for him. Jack can be as crude as dirt, yet also vulnerable and concerned. Mike, a faithfully married man with an eight-year-old boy, doesn’t quite know what to make of his office mate, but Jack manages to pry some suppressed emotions from him. By mid-play, even though little has happened plot-wise, we’ve been sucked into the vortex of these characters, wanting to know more about them and how their relationship will develop.


We soon find ourselves at a restaurant in Tribeca, several weeks later, where Mike’s very proper wife, Julie (Molly Thomas), meets for lunch with Denise (Shannon Marie Sullivan), Jack’s gorgeous sister (Ms. Sullivan is about as gorgeous as they come), who works as a stripper to support herself and her infant child. Like the two men, the women, who’ve never met before, engage in an interesting back and forth over drinks, with their emotions rising and falling as the conversation proceeds and the drinks are downed.


In a sort of coda, the play goes back in time to show us the very first day that Jack arrived to begin working with Mike. Elements introduced earlier now take on somewhat heightened significance, just as they do in Pinter’s BETRAYAL, in which the scenes move backward in time.


Even without divulging further plot information it can be said that Mr. Willimon’s talent for grabbing an audience by the ears and making them listen to people engaged in seemingly everyday talk is impressive. There’s a quality to the dialogue (including the usual macho profanity) that sounds totally natural and unaffected, and there are few boring moments in the 90 intermissionless minutes. This is the kind of play where plot developments are less important than character revelations, and Mr. Willimon gives us plenty of the latter. I have a major reservation about the time during which the second scene occurs, and the behavior of the women in that regard, but to say more would lead to disclosing the central event that justifies the play.


It’s hard to deny that, however well-crafted the dialogue is, the production would falter without this company’s perfectly calibrated acting. The actors are remarkably attuned to every nuance in their sentences, and not a single false note intrudes as we sit only a few feet from them, with spectators on either side of the small acting space, flies on the wall to what they’re saying. Director Aaron Rossini deserves kudos for having elicited such excellent ensemble acting, even from the waiter (John Racioppo), who barely has any lines yet has just the right tone when he serves the women in the restaurant.


BREATHING TIME doesn’t make any significant statement. It’s an exercise in keeping an audience involved in talk, even without much happening. The later conversation between Mike’s wife and Jack’s sister doesn’t illuminate the men, nor does it do anything more than put two strangers in an uncomfortable position that they more or less gracefully negotiate. Even without an overt message, BREATHING TIME forces us to ponder the ineffable cruelty of fate.
Posted by Samuel L. Leiter at 7:22 AM