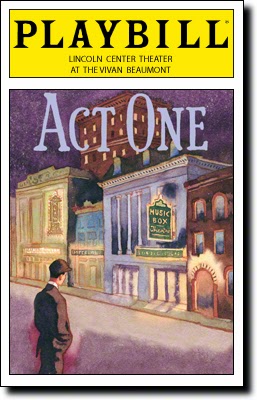 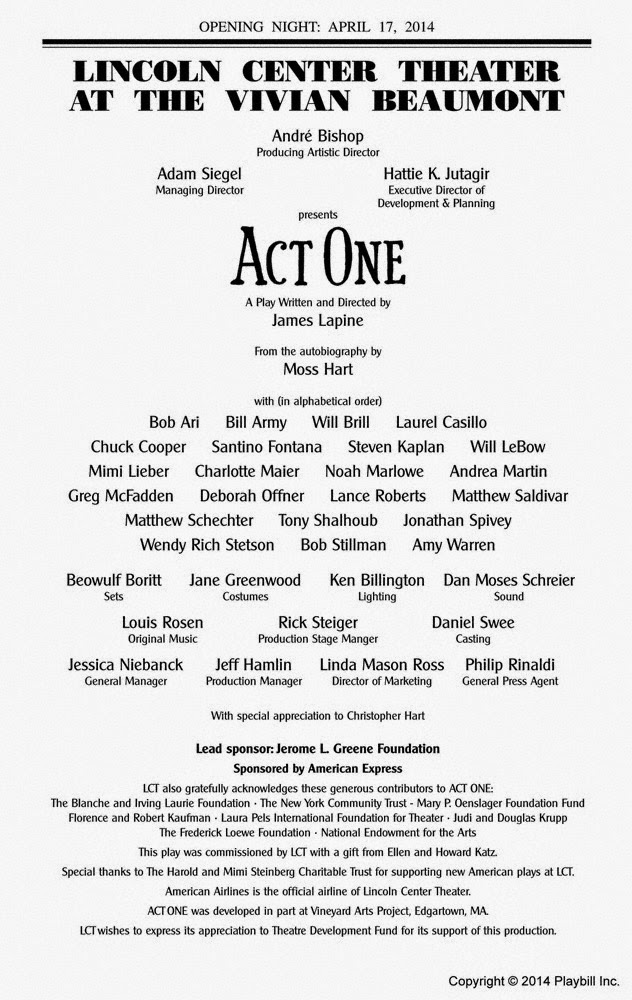 I was in my second year of college in 1959 when Moss Hart (1904-1961) published his best-selling autobiography, ACT ONE, and still remember the buzz about it among my fellow theatre students. Moss Hart was then known to me mainly as the name connected with an “and” to George S. Kaufman (who was familiar to me because of his presence as a TV panelist), since the classic comedies the pair wrote, including YOU CAN’T TAKE IT WITH YOU and THE MAN WHO CAME TO DINNER, were (and continue to be) among the most frequently revived American plays of the day. Of course, Hart went on to have an abundant career in theatre and film, but his autobiography tells only of his life up to his first Broadway play, 1930’s ONCE IN A LIFETIME, cowritten with Kaufman when Hart was 26. 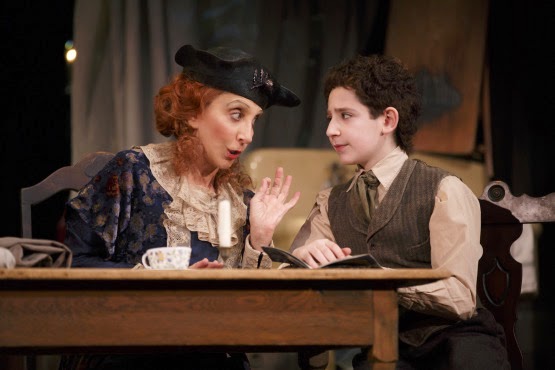 
In 1963, only two years after the book was published, a mediocre film version appeared starring, of all people, George Hamilton as Hart, the child of Jewish immigrants from England, who grew up in poverty in the Bronx and Brooklyn before getting work in a theatrical producer’s office in Manhattan and eventually being linked up with the 15-years-older and already very successful Kaufman (played by Jason Robards, Jr.). The film’s director, Dore Schary, who was one of Hart’s early show business friends, is not a character in the film, but (as played by Will Brill) he’s one of a trio of Hart’s buddies in the new stage adaptation written and directed by James Lapine at the Vivian Beaumont Theatre. The film and stage versions, while essentially telling the same story, are considerably different from each other, and a number of characters who appear in one (like Archie Leach—later, Cary Grant—in the movie) don’t appear in the play, and vice versa. 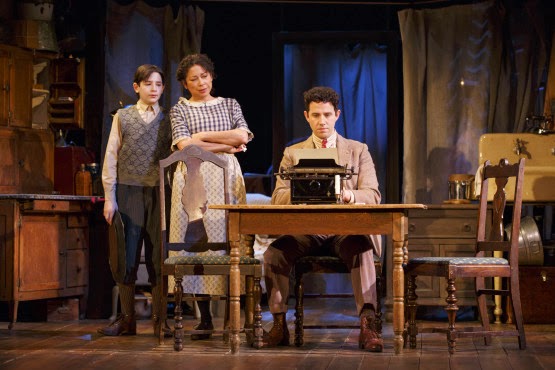 
Mr. Lapine’s ACT ONE is in two acts, but its own act one is far less interesting than its second. Rather than concentrating on the most dramatically interesting part of the story, Hart’s virgin collaboration with the acerbically witty, germophobic—as shown here—Kaufman (Tony Shalhoub), the play chooses to cover Hart’s life from boyhood to young manhood, showing him and his struggling parents in their shabby flat, and making a big to-do about his close relationship with his Aunt Clara (Andrea Martin), a colorful theatre lover who lived with Hart’s family and introduced young Moss to the glories of the drama, even if only at the Alhambra, a cheap uptown venue on 126th Street. Friction with Hart’s father led him to kick her out, giving Ms. Martin a big dramatic moment, but the scene—and many others depicting Hart’s rise from tenement living to when he’s able to move his family to fancy digs across the river—lacks dramatic thrust; while engrossing on the page, they’re mere time killers on the stage. The play would have been much more effective if Mr. Lapine had chosen to concentrate on the period when Hart was introduced to Kaufman and developed an odd-couple relationship with him as they worked on preparing ONCE IN A LIFETIME for what, after running into script problems, turned out to be a hit that made Hart a new theatrical force  with which to be reckoned.
Tony Shalhoub, Santino Fontana. Photo: Joan Marcus.


As an episodic play covering many years and introducing numerous characters, ACT ONE requires a set that can quickly shift from one locale to another, and a large cast in which some must play multiple roles. The set problem is solved by Beowulf Boritt’s design of an elaborate skeletal structure with multiple sections built on a turntable that, like the recent MACHINAL, takes frequent advantage of its flexibility to keep spinning from place to place as Ken Billington’s lighting highlights its many facets as they come into view. The huge set, though, is as distracting as MACHINAL’s, although one or two scenes, like that upstairs in Kaufman’s beautiful home, where the playwrights work, are striking.


The large company, with 22 actors playing at least twice as many characters, has some performers playing roles for which they might not be ideal. Thus, Alexander Woollcott, the famously rotund critic and raconteur, is played by the slim Will LeBow, while the white producer Max Siegel is in the hands of black actor Chuck Cooper, whose other roles include a Langston Hughes who never looked so well fed. Many famous theatrical personalities of the day are among the dramatis personae, of course, and those who know the period and the book will enjoy the game of name recognition, even if the actors only rarely resemble their roles. Andrea Martin, for instance, plays not only Aunt Clara but eccentric agent Frieda Fishbein and Kaufman's wife, Beatrice Kaufman, while Deborah Offner has five roles, including a turn as Edna Ferber, dressed in a pants suit to hint, it would seem, that she was a lesbian, a claim that’s never been supported.


Mr. Shalhoub makes a credible Kaufman, but he also must play a middle-aged Hart, narrating the story (along with two other Harts, Mr. Fontana as the young playwright and Matthew Shechter as Hart, the boy). Mr. Shalhoub’s Kaufman brings to mind the multi-phobic character of Monk he played successfully on TV, but Kaufman’s aversion to touching anyone, while good for a laugh once or twice, is overdone and loses credibility. I wonder, by the way, why the show chooses to produce Kaufman as Cough-man, when I always remember it being Cowf-man. For verification, simply Google “Kaufman TV panelist” and you’ll see a YouTube clip of him from an old TV show being introduced by host Clifton Fadiman as Cowf-man.


Mr. Santino’s Hart is artificial and charmless, with none of the qualities one would associate with someone of Hart’s background. He’s an energetic cipher, without any romantic entanglements, and could conceivably exchange roles with the equally uninteresting Zach Braff in BULLETS OVER BROADWAY, who also plays an ambitious young playwright of the 1920s.


Mr. Lapine’s production is overproduced and flat. The first act is played at such a brisk pace, with such outsized performances, that it feels like a musical comedy. I kept expecting characters to burst into song every five minutes. The second act, because the story of ONCE IN A LIFETIME’s writing is the focus, is more restrained, but by then it’s too late to regain traction and the play never fully finds its footing. There’s so much narrative about the art of playwriting that one wonders who, outside of theatre people, would even be interested in listening to it. The irony, of course, is that so many of the playwriting notes seem to have been ignored by the play before us.