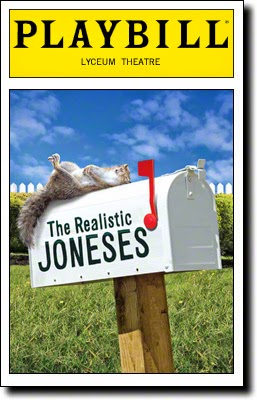 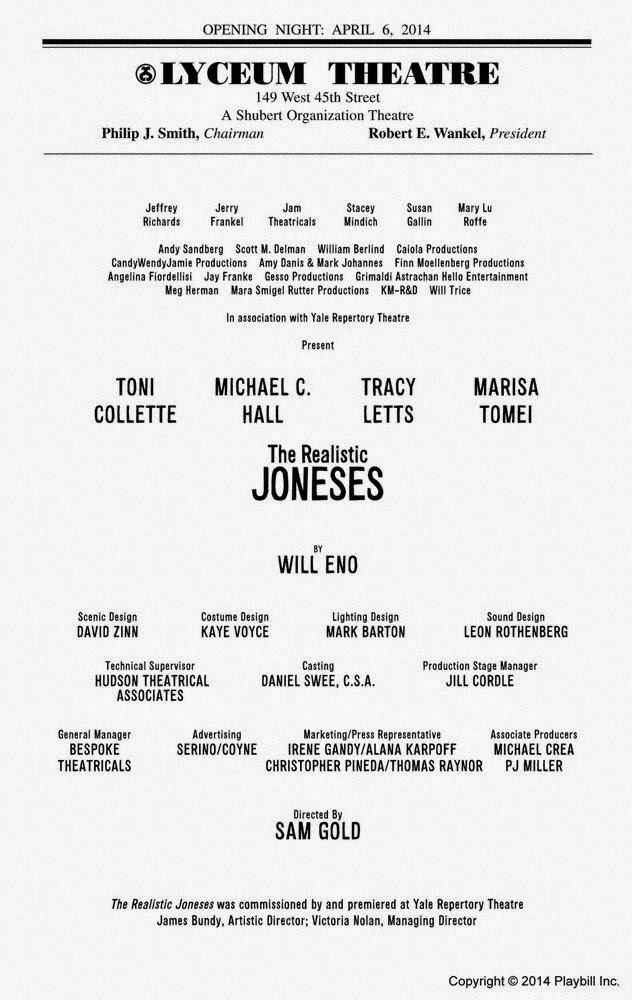 After greatly appreciating Will Eno’s delightful THE OPEN HOUSE Off Broadway a couple of weeks ago, I was psyched about seeing his new Broadway offering, THE REALISTIC JONESES, at the Lyceum. Making it even more exciting was one of the most stellar casts on Broadway this season, any one of the four actors involved having enough star wattage to power a play on his or her own. Part of my disappointment at the results is surely because of the disparity between my high hopes and the uninvolving results. 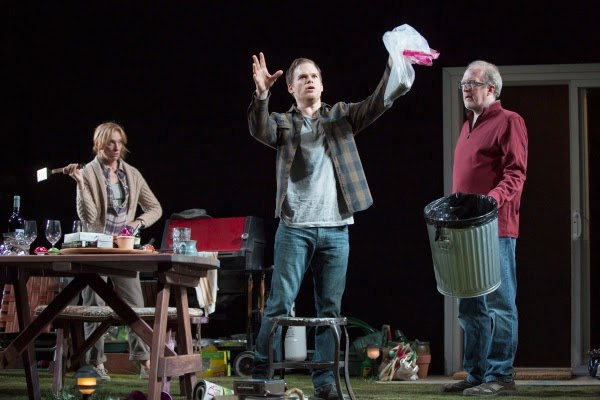 From left: Toni Collette, Michael C. Hall, Tracy Letts. Photo: Joan Marcus.
None of the characters are challenging enough to warrant the kind of performance breakthroughs that allow actors to show untapped sides of themselves. The situations are not provocative and groundbreaking, and the play won’t draw much attention for unusual themes or production values.  Many may find interest in Mr. Eno's gently metaphysical intimations about life and death, his sweetly caring concern for people's frailties, or his ability to establish unexpectedly affecting twists and turns in the course of everyday conversation. As realized in the THE REALISTIC JONESES, however, these don't add up to engrossing drama or comedy, and even the presence of Tracy Letts, Toni Collette, Michael C. Hall, and Marisa Tomei failed to make up the balance for me. (Mr. Letts was also in the play's premiere at the Yale Repertory Theatre in 2012, which costarred Glenn Fitzgerald, Johanna Day, and Parker Posey.) 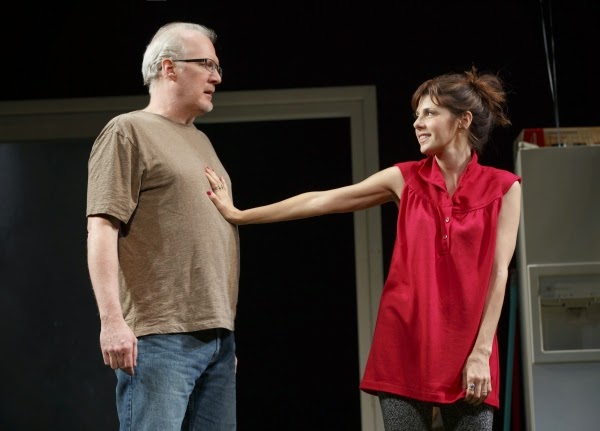 
A number of major reviewers have found the play and production worth every one of its 90 intermissionless minutes,  although the atmosphere in the theatre when I attended, apart from occasional laughter, seemed pretty reserved. Aside from the pleasure of the first 20 minutes or so, when the characters are introduced and we get to bask in the warm talent of the aforementioned artists, a creeping sense of frustration begins to set in as we realize nothing much is going to happen, and that all we’re going to get is more of the same semi-absurdist black comedy. When the payoff, if you can call it that, eventually comes, you wonder, “Is that all there is?”


Set in “A smallish town not far from some mountains,” the play first reveals Bob and Jennifer Jones (Mr. Letts and Ms. Collette) sitting in their backyard and enjoying the night sky. Their dialogue is a bit off kilter, which creates a lightly comic atmosphere. Bob is a bit crotchety, his wife conciliatory. Before things get too far, another couple, John and Pony Jones (Mr. Hall and Ms. Tomei), barge in, bearing a gift-wrapped bottle of wine. They’ve recently moved into a nearby house and have come to make friends with their new neighbors, using the fact that they share the same last name (printed on the mailbox) as an icebreaker. 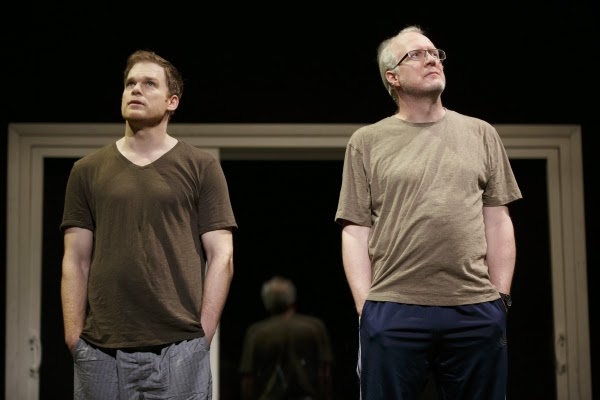 Michael C. Hall, Tracy Letts. Photo: Joan Marcus.
The two houses, although not contiguous, are virtually the same, so the dramatic setup is not unlike that in Lisa D’Amour’s DETROIT, seen last season. David Zinn’s sparse set, which looks like one of the cheapest on Broadway this season (could this be related to the stars’ salaries?), consists of the same upstage set of sliding glass and screen doors to serve for both homes. The backyard area at stage right is generally reserved for Bob and Jennifer’s home, the kitchen area at left for John and Pony’s home. A scene in a food market is noted simply by a table with some goods on it. Tall trees stand at either side of the simple black drop into which the doors are set. When appropriate, Mark Barton’s lighting illuminates the theatre’s actual upstage walls, visible above and to the sides of the black drop.


John and Pony, who are somewhat younger than Bob and Jennifer, are vague about why they’ve moved here. John says he repairs air conditioning and heating units, but basically he’s someone who fixes things, like a lamp that the other Jones couple discards and Pony, who is struggling to maintain an online greeting card business, retrieves. There are odd discrepancies in their dialogue, too; someone will say something queer or surprisingly blunt, or change the subject, or apologize for something he or she has said, perhaps declaring they didn’t mean it. Nonsequitors flow like water, but are rationalized or ignored. Mood swings and forgetfulness are frequent. The only character who seems conventionally normal is Jennifer.

Bob, we learn early on, is suffering from a degenerative neurological disease, but he's in denial about it. His illness is being treated by a local doctor, a leading specialist. This helps considerably in our understanding of why he acts so oddly. But we only learn much later that John has the same ailment, and that he moved here because of the specialist's presence. While Bob is in denial about his illness, John tries to keep it from Pony, out of concern for her discomfort with such matters. Pony's quirky reactions, on the other hand, are attributable to her ultimately self-acknowledged lack of an attention span. This, though, doesn't hold water, as she seems perfectly capable of a sustained conversation when required, and she’s even taking college courses, including one in theology.
Once things are revealed and the four new friends appear to have come to some deeper understanding of each other, the play ends somewhat as it began, but now with everyone staring off into the night sky, pondering the imponderable. Apart from Mr. Eno’s clever playfulness with language, here attributable to mental disease and not to some gently surrealistic artistic agenda, there’s not much else to grasp onto other than to see four people striving to communicate, deal with whatever is slowly eating away at their loved ones, and hold on to their personal realities in the face of imminent death. For some, this essentially plotless material may be enough; others, like me, may want more dramatic steak with their potatoes.


The actors form an airtight ensemble, each quite good in their roles, but the material prevents them from offering any surprises. Mr. Letts repeats the cutting sarcasm he used so effectively in WHOSE AFRAID OF VIRGINIA WOOLF?, Ms. Tomei offers the cute and slightly ditzy persona she’s played in other roles, Mr. Hall provides the concentrated edginess he brings to his TV show, “Dexter,” and the versatile Ms. Collette is any one of a number of similar characters she’s played in her career. Sam Gold’s direction uses lighting and ominous sound effects (excellently created by Leon Rothenberg), including crickets and the hooting of an owl, to heighten the atmosphere, but, while he evinces fine acting from his players, the material is not sharp enough to make us wonder, as we leave the theatre, what all the fuss is about.