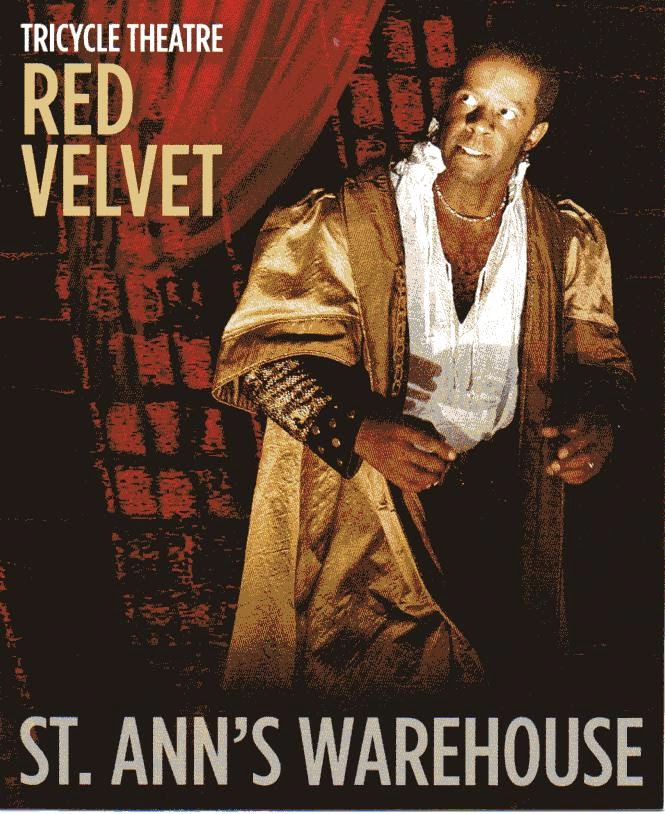 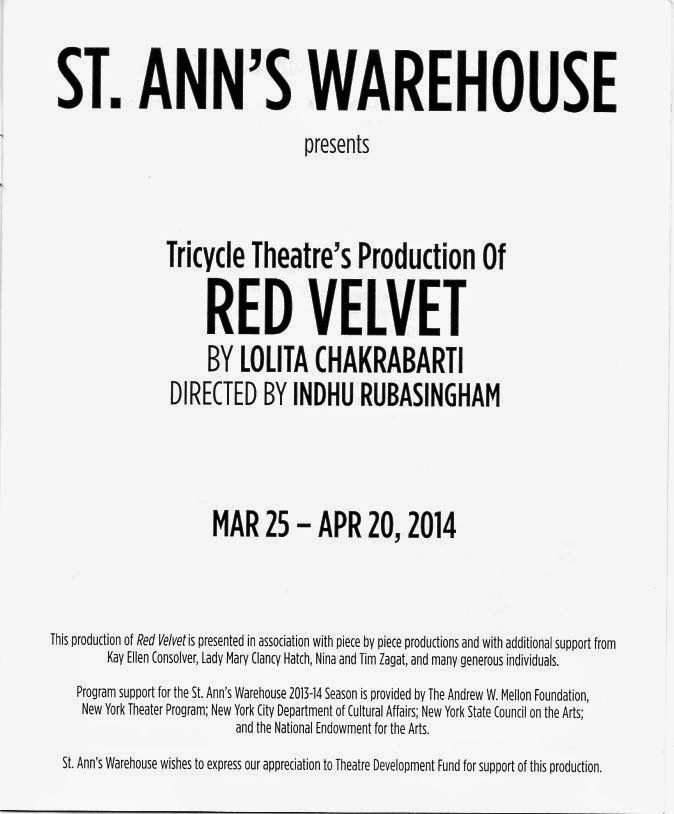 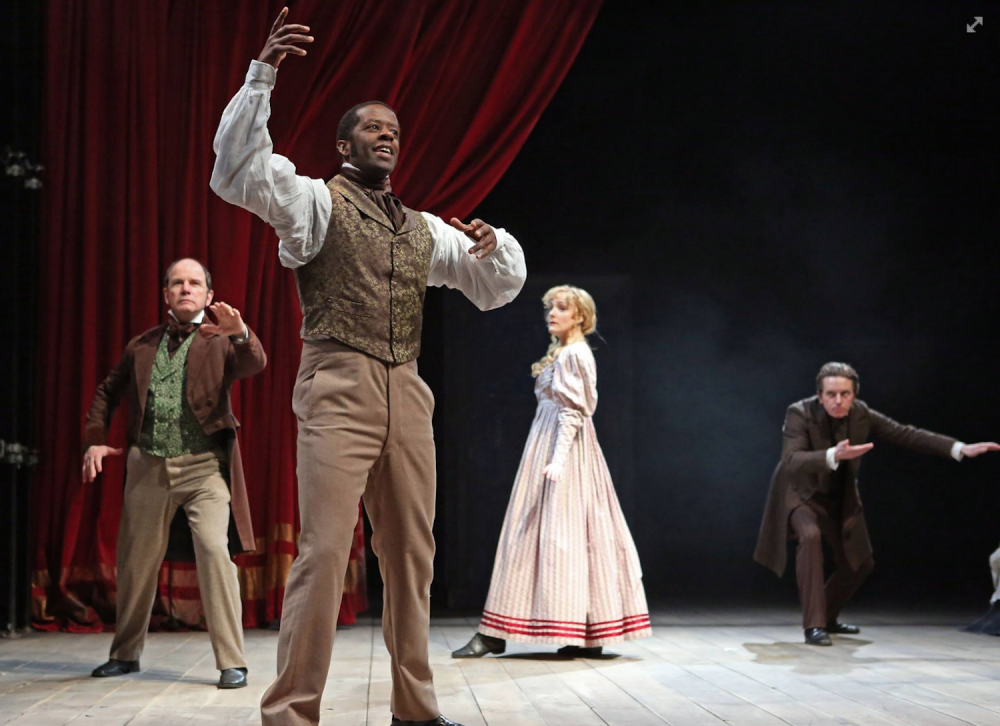 In RED VELVET, at Brooklyn’s St. Ann’s Warehouse, Lolita Chakrabarti has written a biodrama focusing on a couple of days in Aldridge’s (Adrian Lester) life when he played OTHELLO at one of London’s major theatres, Covent Garden, in 1833. This being the first time a black actor had played the Moor, the production proved very controversial, eliciting nasty racial slurs in the newspaper reviews. (Stung, Aldridge didn’t reappear in London for 15 years.) The production was staged just at the time that Parliament was debating a bill to emancipate British-owned slaves in the West Indies, a development that, for all its humane intentions, was viewed by many as a threat to British economic interests.  The presence of Aldridge, a well-educated and highly intelligent black man, belied racial stereotypes and complicated reactions to the political situation; Ms. Chakrabarti skillfully weaves these happenings into her narrative.

The premise for Aldridge’s performance as Othello at Covent Garden is that the great tragedian, Edmund Kean, who had recently gained acclaim for his performance in the role, is too ill to go on and that Aldridge has been hired to replace him by the famed venue’s French-born manager, Pierre Laporte (Eugene O’Hare). The play delves into the racial, artistic, and political ramifications of Aldridge’s extraordinary presence in the world of white English Shakespeareans at a time of heightened emotions concerning the slave trade. Framing the story are bookend scenes showing Aldridge at 67 in the year of his death, bent under the weight of age and physical exhaustion, during his final tour of Poland. A persistent young Polish reporter, the pretty Halina (Rachel Finnegan), manages to get access to the bitter old actor in his dressing room, where he treats her rudely, but nevertheless begins to tell her something of his story. The play proper then commences, and it returns at the end to Poland, as Aldridge dons whiteface in preparation for playing Lear.


During the main action, we watch him engage in rehearsal for Othello with Ellen Tree (Charlotte Lucas), the young actress playing Desdemona, who is also the fiancée of Charles Kean (Oliver Ryan), Edmund Kean’s son. Charles is jealous of the opportunity being given Aldridge while he, who was often his father’s Iago, is forced to remain in that role in support of Aldridge’s Moor rather than moving up to play the part himself.


Much stage time is taken up with the niceties of performance interpretation as Aldridge and Tree work out their stage relationship, and there is a substantial chunk of OTHELLO that concludes the first of the play’s two acts. During the enactment of OTHELLO, the actors strike exaggerated melodramatic poses, evoking long-gone methods of playing Shakespeare; but even when immersed in such flamboyant posing, the actors offer strong impressions of how premodern performances could bring fiery life to Shakespeare’s words.


The production, beautifully staged by Indhu Rubasingham, has been brought over intact from London by the Tricycle Theatre; it features a generally expert British ensemble, led by the exceptional Adrian Lester as Aldridge. It’s performed on an expansive open space, well designed by Tom Piper and superbly lit by Oliver Fenwick, with theatrical floorboards beneath the actors’ feet, dressing tables in the shadows at either side beneath metal scaffolding, and a loosely draped, red velvet curtain hanging upstage to suggest the presence of Covent Garden’s auditorium, although the action is directed outward to us, not upstage. A few set pieces are moved here and there by the actors for scene changes, and, while there’s no attempt at literal realism, there’s a definite sense of period and honesty that effectively conveys the personal and historical world being presented. With the pitch-perfect costumes of Mr. Piper enhancing the period tone, I was reminded of the famous RSC 1980 production of NICHOLAS NICKLEBY, which used a similar  theatrical approach.


Mr. Lester’s bravura performance as Aldridge is a testament to this British actor’s power and sensitivity; using an American accent, he is thoroughly convincing as a man who braved the thickets of 19th-century racism to sculpt a career no other actor of his race came even close to during his lifetime. The pride and integrity he brought to his work, soured by the hardships he had to endure, are brilliantly captured, as is the conviction he brings to the reenactment of Aldridge’s Othello. Toward the play’s end, when he is told by Laporte that the Covent Garden board has decided to fire him, he and Laporte engage in an incendiary argument that encapsulates Aldridge’s frustrations; when the scene returns to Poland in 1867, we understand fully how this and other such experiences have weighed on him, and why he seems so tired and cynical.


The other actors offer the kind of well-rounded character acting we expect of the best-trained British actors. Ms. Lucas’s Ellen Tree is charming, if cautious, in her work with Aldridge, gradually realizing that he has something satisfying to offer as a fellow artist. Oliver Ryan’s smug and supercilious Charles Kean provides wonderfully comic relief as we watch his petty reactions to Aldridge’s success. Mr. O’Hare’s Laporte, for  all its intensity, is often not easy to follow because of the heavy accent he adopts; Rachel Finnegan’s Polish-accented Halina is sometimes guilty of the same fault but she has a chance to redeem herself when playing two other roles, one of them that of Aldridge’s wife, Margaret. Natasha Gordon as the Jamaican servant Connie has the interesting task of being a mostly silent listener to the talk of the white people who employ her; when even liberal-minded whites speak humanely of blacks but treat her as if she’s either not there or as little more than a coat rack, we see the simmering anger that will later burst out in a scene with Aldridge. Simon Chandler and Nic Jackman effectively round out the company, with each playing double roles.


Ms. Chakrabarti’s play isn’t free of the markers that usually infect biodramas; the insertion of numerous historical facts based on extensive research is occasionally over-obvious and clumsy, but fortunately not to the extent that it obscures the human drama behind the remarkable life lived by Ira Aldridge. RED VELVET is a fascinating look at a theatre and time that may have passed but whose themes still reverberate a century and a half afterward. Given the combination of a smartly written play, a fascinating topic, a memorable leading performance, and a first-rate production, there can be little reason for serious theatergoers to overlook RED VELVET.