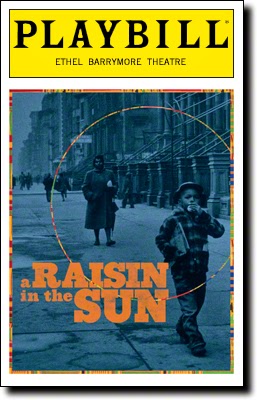 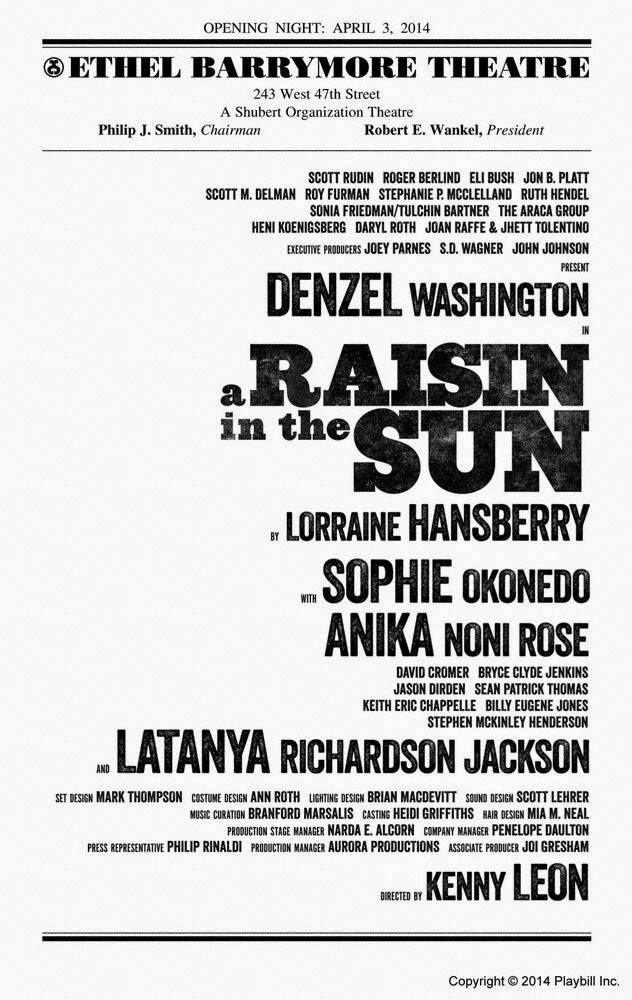 A RAISIN IN THE SUN, Lorraine Hansberry’s path-breaking 1959 play about a black family from a Chicago ghetto fighting about how best to use the inheritance money left by their late patriarch, comes through as barely dated and powerfully gripping in its latest Broadway incarnation. Directed by Kenny Leon, who staged the 2004 revival starring Sean Combs as Walter Lee Younger, Audra McDonald as Ruth Younger, and Phylicia Rashid as Lena Younger, is also responsible for the current version, starring a stunningly good Denzel Washington as Walter Lee. Diahann Carroll was scheduled to play Lena, the family matriarch, but had to step down during rehearsals. She was replaced by Latanya Richardson Jackson, while Walter’s wife, Ruth, is in the hands of British actress Sophie Okonedo, and Walter’s sister, Beneatha, is played by Anika Noni Rose, to cite only the adult Youngers. 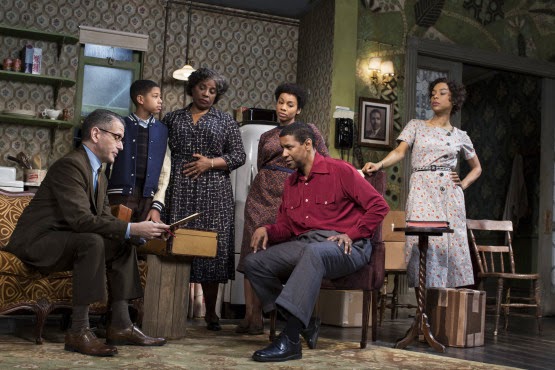 The audience enters to see a scrim on which Langston Hughes’s poem, from which the play’s title derives, is printed. We hear Ms. Hansberry’s voice from an old interview, but since the audience is settling in and talking, it’s hard to listen to and quickly becomes background noise. More effective are the brief comments she makes just before the curtain on this two-act, two hour and 40 minute production rises. When it does, the Youngers’ shabby apartment moves forward several feet, limiting its downstage space and thus emphasizing its smallness by providing a bare minimum of room in which the actors can navigate. There are no false notes in the lighting, by Brian MacDevitt, who also did the 2004 revival, or in Ann Roth’s period costumes. Scott Lehrer’s sound design, with music curated by Branford Marsalis, gives us the bluesy melodies of Miles Davis, setting just the right tone for the action.


The big draw, of course, is Mr. Washington, as Walter Lee, the downtrodden chauffeur who lives in the small apartment with his 10-year-old son, Travis (Bryce Clyde Jenkins, appealing), and his wife, sister, and mother. Walter wants to use the $10,000 his mother has inherited to buy a liquor store, but his partner in the enterprise, the unseen Willy, absconds with over $6,000 with which Walter entrusted him. Part of that money was for Beneatha to study medicine. The remaining money has been used by Lena as a down payment on a house in the new white community of Clybourne Park. The white folks there, however, send a representative, Karl Lindner (David Cromer, very good), to talk them out of moving in, even offering to pay them for their cooperation. The disappointed Beneatha, very much the Civil Rights advocate, is seriously interested in African culture, largely because of her relationship with a Nigerian, Joseph Asagai (Sean Patrick Thomas, outstanding), and less inclined toward a romance with the wealthy George Murchison (Jason Dirden, very fine), a snooty college friend in white bucks (Walter calls them "faggoty"), who could easily raise her from poverty.


All the characters are given marvelous opportunities to express their frustrations and aspirations; the play was an eye-opener for white audiences in its day, when striving members of the black community were seeking to move forward in American society, but were being held back even by whites who thought themselves unprejudiced, claiming they only wished to preserve the status quo. The Civil Rights movement of the early 60s was about to burst onto the scene, but its antecedents simmer throughout this play, and the multiple strands of racial tension are marvelously expressed, but always from a human and personal rather than soap box perspective. Even 55 years later, the issues on the table in A RAISIN IN THE SUN continue to resonate in American society.

Each member of this marvelous ensemble brings life, love, and luminosity to their performances, and it’s difficult to single any one out for special praise or criticism. Mr. Washington, of course, dominates the production, even though his own age (59) is considerably at odds with Walter Lee's 35 (bumped up to 40 for this staging). He delivers an angry, nervous, funny, proud, vulnerable, and ambitious Walter Lee, bringing to the stage the extraordinary energy and charisma that have made him a world-wide film star. If the play now says he's 40, Mr. Washington makes you believe it. He’s matched perfectly by Ms. Okonedo’s struggling but valiant and unyielding Ruth, and Anika Noni Rose’s sensitive yet aggressively proud Beneatha, who does a show-stopping African dance number she learned from her Nigerian boyfriend. Even the tiny part of Bobo, one of Walter Lee’s associates in the liquor store scheme, gets an exceptional performance by veteran Stephen McKinley Henderson. As Lena, the powerful mother who holds her family together with unyielding love, no matter how much they may disappoint her, Ms. Jackson offers a touchingly satisfying performance.

This is a practically seamless production that reveals without any question why A RAISIN IN THE SUN remains a great American classic, and will for many years to come.
Posted by Samuel L. Leiter at 7:37 AM