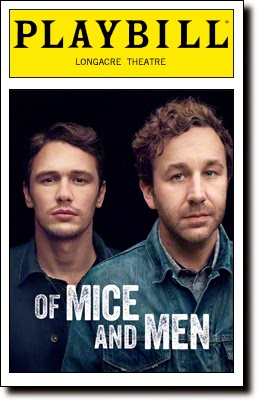 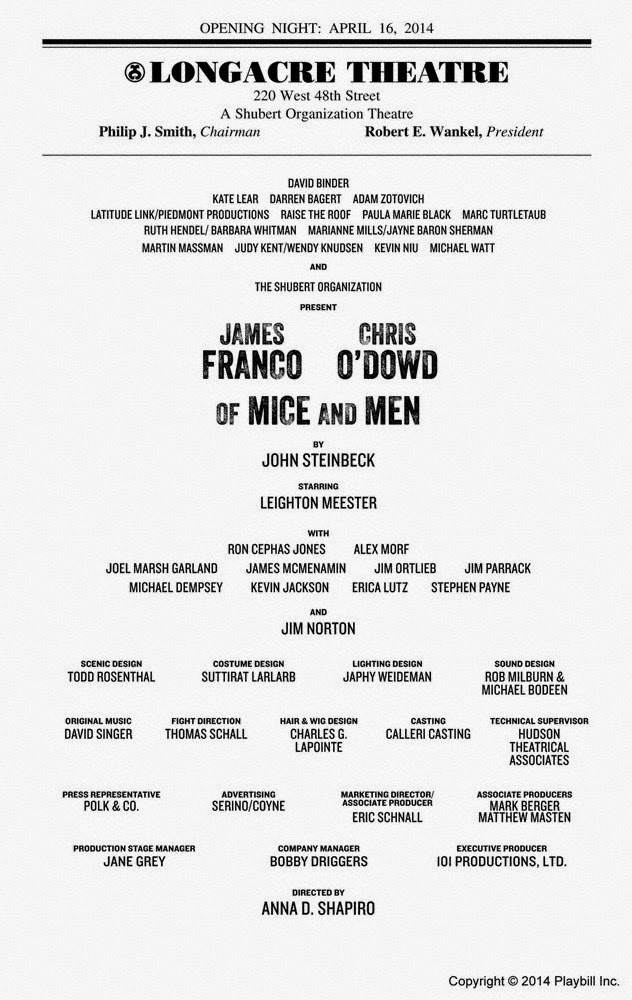 John Steinbeck’s classic Depression-era novel, OF MICE AND MEN, dramatized by Steinbeck himself and staged by George S. Kaufman at Broadway’s Music Box Theatre in 1937 for a then solid run of 207 performances, starred Wallace Ford as George Milton, the brighter of the play’s two migrant farm workers, and Broderick Crawford as the powerful, slow-minded lug, Lenny Small. It has since been produced countless times around the world, and has had two previous New York revivals, one of them on Broadway in 1971, with Kevin Conway and James Earl Jones as George and Lenny, and one Off Broadway in 1987. The 1939 movie version starred Burgess Meredith as George and, as Lenny, Lon Chaney, Jr., who had replaced Crawford when the original New York production moved to Los Angeles. A less effective movie, starring John Malkovich and Garry Sinise, was made in 1992. There also have been musical and opera versions. Now two of today’s most active film actors, James Franco and Chris O’Dowd, have taken up the parts of George and Lenny for the second Broadway revival, at the Barrymore Theatre, with TV's "Gossip Girls" star Leighton Meester as Curley’s wife and Jim Norton as the one-handed old man, Candy. Anna D. Shapiro is the director. 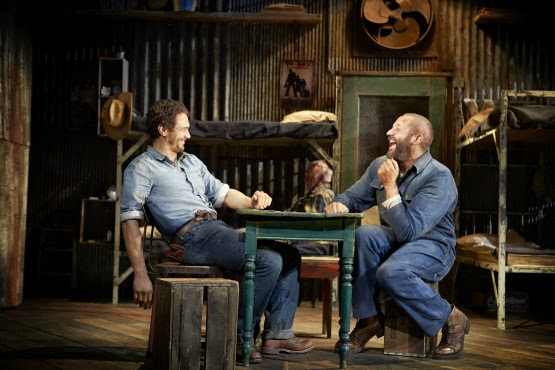 
This is a rather straightforward, beautifully designed, and lovingly realized version that serves Steinbeck’s drama well. This is what I wrote regarding the first production in The Encyclopedia of the New York Stage 1930-1950: “the play’s vibrantly alive characters, its deeply humane central relationship depicting people struggling to overcome loneliness, its gut-wrenching emotional peaks, its simple and compact structure, and its provocative situations guaranteed it tremendous audience sympathy and appreciation. At the same time, the world it depicted was not a pleasant one, and despite its broodingly tragic atmosphere it failed to achieve the universality of tragedy, and was generally classified as a melodrama of the more thoughtful variety. A brilliant production that perfectly captured the earthy atmosphere of life on a California ranch abetted the virtues in Steinbeck’s script.” Much the same can be said of the current revival. 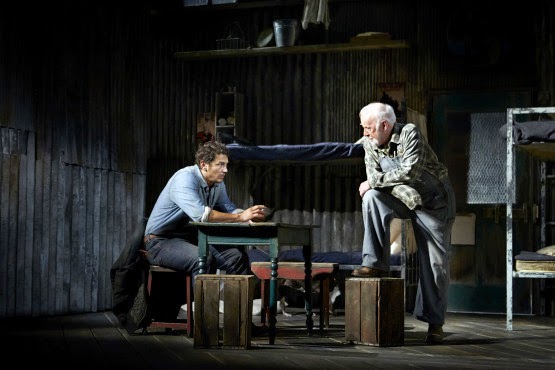 James Franco, Jim Norton: Photo: Richard Phibbs.
When first performed, the play’s language was considered excessively raw for New York theatergoers’ ears, but today’s audience would laugh if told that words like tart, goddamn, bastard, and bitch were thought too profane. Critic Grenville Vernon, for example, observed that, despite the play’s fine qualities, it “is none the less appalling. . . . Mr. Steinbeck has made their language less brutal than it would be in real life, but it is to be wished that the dramatist had gone farther, and employed suggestion rather than bald statement.” Take that, David Mamet.
Chris O'Dowd, Leighton Meester. Photo: Richard Phibbs.


The new production has excellent sets by Todd Rosenthal, evocative lighting by Japhy Weideman, and convincing period costumes by Suttirat Larlarb. James Franco makes a fine George, being sincerely concerned with his weak-minded friend’s potentially dangerous behavior, but always with a loving hand, even when Lenny gets him most angry. There's an unavoidable hint in the way others talk about George and Lenny's unusual relationship that there may be something deeper to it than ordinary male friendship. George's part is the less colorful of the two, but requires firm concentration and conviction, and when he's forced to make an ultimate decision regarding Lennie's fate, we can feel his anguish. The mentally challenged Lenny has to make you believe not only in his physical strength but in his wish to restrain himself from doing something that might upset George. The Irish born and raised Mr. O’Dowd, bearded, with his head crudely shaved, uses delicate hand gestures to demonstrate his being ill at ease in his own body, and creates an aura of both power and dimwittedness. He's tall but not overly so, so his movements must be carefully measured to make his great might seem all the more palpable. I suspect the long-sleeved work jumper he wears is padded to give him more bulk.

The casting of the excellent Jim Parrack as the muleskinner, Slim, seems problematic, though, since Mr. Parrack is himself tall and powerfully built, making Mr. O’Dowd seem not quite as towering as he's described. But it's a testament to Mr. O’Dowd’s performance that such thoughts don't impede one’s appreciation for the sense he provides of a huge brute in which the tender soul of a child is trapped.


The supporting cast is solid, although one or two characters, like Alex Morf’s Curley, tend toward the two-dimensional. Jim Norton, one of our greatest character actors, brings vivid life to Candy, the old farmhand desperate for a stake in George and Lenny’s dream of a place in which to settle, while Ms. Meester, although thin of voice, is quite good as Curley’s flirtatious wife, capturing the vulnerability and sense of isolation that leads her to behave as she does. And Ron Cephas Jones as Crooks, the sole black man in this racially intolerant white environment, makes us feel his deep-rooted sense of being an odd man out.


OF MICE AND MEN is among the season’s top revivals. If you read it in high school and never saw it on stage or screen, you can’t go wrong in visiting this production for a close approximation of what John Steinbeck had in mind.
Posted by Samuel L. Leiter at 7:45 AM