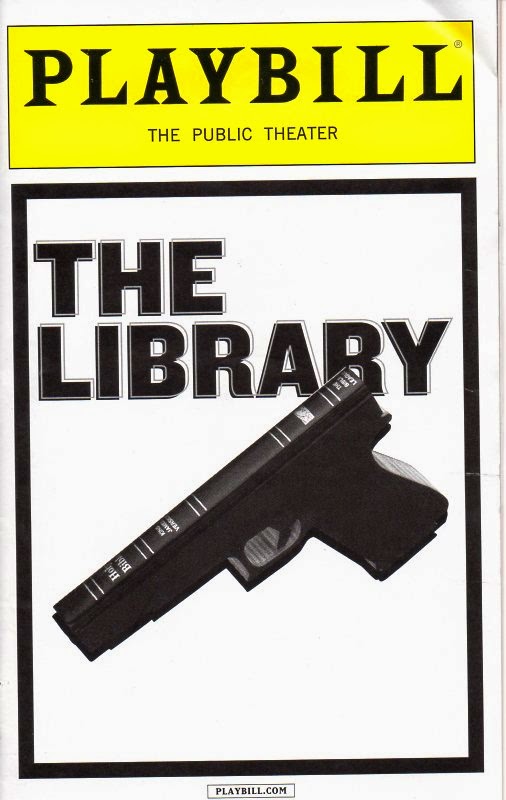 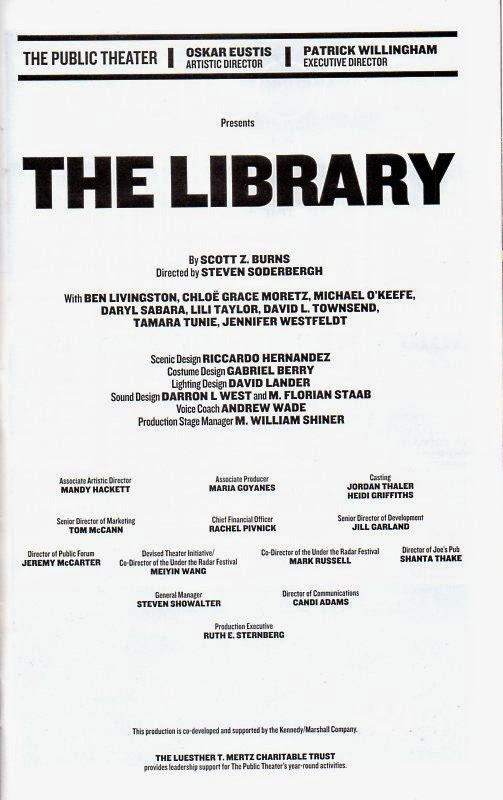 Steven Soderbergh, best known for his many film and TV directing credits, is at the helm of this Scott Z. Burns play at the Public’s Newman Theatre. Despite a script inspired by the Columbine High School shootings, and a cast starring the excellent 17-year-old Chloë Grace Moretz, the results are mixed. 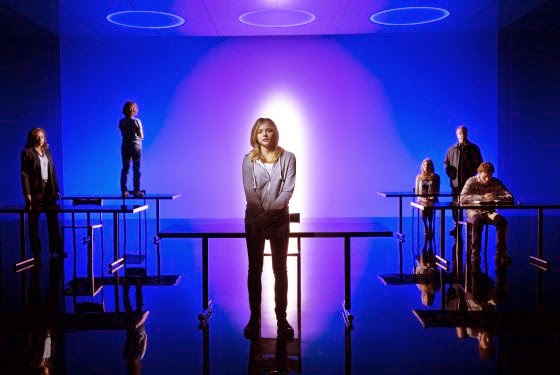 Chloe Grace Moretz. Photo: Joan Marcus.
THE LIBRARY, set “in the near future,” concerns the aftermath of a mass shooting in a high school library during which Caitlin Gabriel (Ms. Moretz), when threatened at the barrel of a gun, is reported by a fellow student, Ryan Mayes (Daryl Sabara), to have told the 21-year-old killer, Marshall Bauer, where six other students were hiding.  The killer then wounded her so badly she nearly died. The student who emerges from the tragedy as the hero is a born-again Christian girl named Joy Sheridan, said to have led her classmates in prayer before she was shot. The story gains national attention, inspiring Joy’s pious mother, Dawn (Lili Taylor), to devote herself to burnishing her daughter’s life; she even writes a highly profitable best-selling book which will become a movie. (There’s a chilling scene between Dawn and her publisher [David L. Townsend] that lays bare the way in which people, even well-meaning ones, use the media for self-aggrandizement.) Caitlin, however, despite her sincerity and academic abilities, is disgraced both locally and nationally, and even deprived of adequate victim’s compensation, because of Ryan’s allegations, which she staunchly denies. Her parents, who aren’t sure if she’s telling the truth, are undergoing marital troubles that reveal their own fabric of lies and deceptions. All along, a determined police detective (Tamara Tunie) conducts an investigation into the circumstances surrounding the shooting and Caitlin’s role in it. Caitlin’s failure to be completely forthcoming only complicates matters.
Chloe Grace Moretz, Jennifer Westfeldt. Photo: Joan Marcus.


THE LIBRARY touches on the ways the media exploit stories and shape their narratives, even before all the facts are in. However, its RASHOMON-like implications of what is truth and what is not are overlooked when, to all intents and purposes, what actually happened is revealed, which therefore removes any ambiguity that might remain. No examination of the killer’s motives is presented, as the play is concerned more with the outcome of the shootings than their cause.


Mr. Burns’s 90-minute, intermissionless play, while rather slight, is made more interesting than it deserves by Mr. Soderbergh’s movie-influenced staging, supported by arresting visuals and a gripping sound design by Darron L. West and M. Florian Staab. Ignoring the script’s description of a naturalistic school library, including a bloodstained carpet, Riccardo Hernandez’s minimalist, modernist set is essentially an open space with five sleek desks and chairs on a shiny black floor, with a cyclorama at the rear. David Lander’s brilliant lighting, using potently dramatic colors and perfectly placed spotlights, creates a vivid scenescape that also allows for memorable silhouetting.


The acting has a dry, low-keyed, conversational quality that rarely opts for big emotions; these people, regardless of what’s churning inside them, keep their feelings in check (although always visible beneath the surface), which focuses attention on the events affecting them. Ms. Taylor’s understated, superficially kind Dawn Sheridan is made even scarier because of the restraint with which she’s portrayed.
Ms. Moretz, though, is the big takeaway; a terrifically talented young actress, she does a masterful job of capturing the troubled Caitlin’s dilemma, laying bare the character’s fear, anger, sensitivity, bewilderment, and frustration in a world where what sells and inspires is often the opposite of what’s true and moral.
Posted by Samuel L. Leiter at 8:22 PM