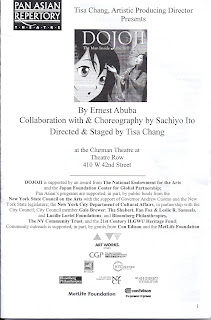 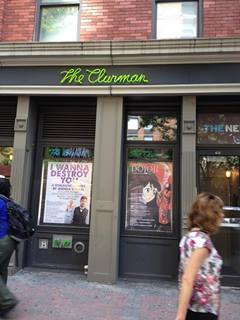 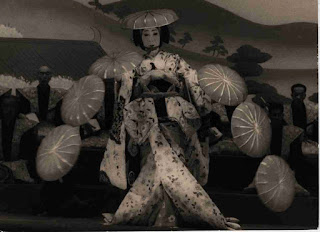 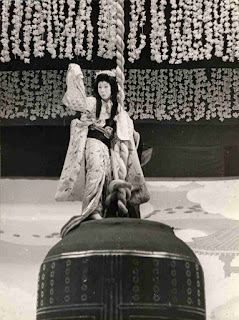 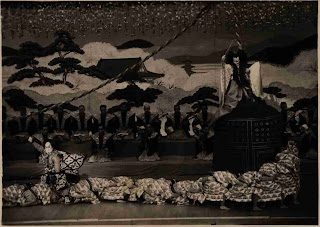 Scenes from the kabuki version of DOJOJI.
21. DŌJŌJI: THE MAN INSIDE THE BELL


Ernest Abuba's DŌJŌJI: THE MAN INSIDE THE BELL, at the Clurman Theatre on Theatre Row, is based on a legend that has had an enormous impact on the traditional Japanese theatre, especially kabuki and nō. Many of you are aware that I’m a specialist in Japanese theatre, so you might think my views on such a play would be of particular interest. I’m afraid, however, that my friendship with two principal artists involved in this production forces me to recuse myself from critical comment. To compensate, I'm providing images from two kabuki versions of DOJOJI.
The principal kabuki version has to do with a young woman named Kiyohime, who believes that a handsome priest named Anchin has betrayed her by claiming that he would return to make her his bride while, instead, he had only been joking and intended to remain a priest at the Dojoji Temple. In her jealous rage Kiyohime follows the priest to the temple, where a huge bell is being consecrated. Although no women are allowed on the grounds, she talks some young priests into letting her dance in honor of the bell's ceremony, and during the dance makes multiple costume changes, symbolic of a snake shedding its skins. She has transformed herself, you see, into an angry serpent in order to cross the Hidakagawa River, but has temporarily resumed her human form for the dance. At the conclusion, she resumes her serpent guise and wraps herself around the bell, inside of which Anchin is hiding, and melts it with her fiery breath and passion. In one version of the ending, the male actor playing Kiyohime mounts the bell solo, still looking like a beautiful woman. In another, the actor dons ferocious-looking makeup and a long wig to suggest the serpent, and a bunch of priests don scale-patterned costumes to constitute the body and tail of the beast.  In that version, as shown in the third production photo, a superhero arrives to quell the serpent's rage. 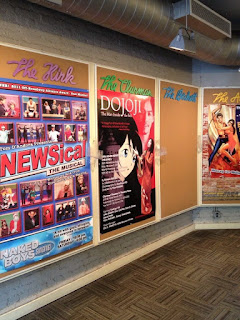 Clurman Theatre lobby, shared with other theatres in the same building.
Posted by Samuel L. Leiter at 4:13 PM