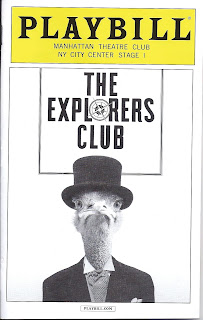 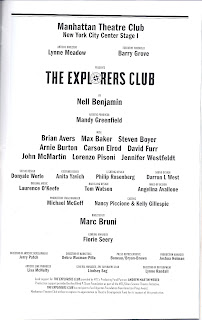 The exceptionally detailed, wood paneled set of Nell Benjamin’s THE EXPLORERS CLUB, at the Manhattan Theatre Club’s City Center Stage I, depicts the interior of the Explorers Club, a determinedly masculine domain in 1879 London. With its red leather couch, fully stocked bar, huge elephant tusks, stuffed animals, fur pelts, framed paintings, chandelier, and upstairs level, Donyale Werle’s setting is almost interesting enough on its own to warrant a visit to this old-time farce, which mingles traditional comedic dramaturgy with a contemporary feminist touch. It’s a shame that the play, however, while seeming to do everything possible to regularly tickle my funny bone, didn't do so often enough to raise the production beyond the level of pleasant entertainment. This is not to say the audience didn't laugh often and vigorously, but, except for a few truly hilarious lines and some exceptionally well done business, I watched with a smile, chuckled now and then, but rarely trumpeted a guffaw. 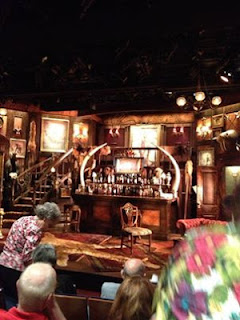 A photo of the set for THE EXPLORERS CLUB, taken at the end of the show. The audience was invited to photograph the set when the actors were not on it.
The hour and 35-minute, two-act production is very well, and very speedily, staged by Marc Bruni. The American cast playing stuffy British types occasionally comes close but doesn’t quite win the cigar in playing what requires the kind of comedic genius we think of when we recall Monty Python. For me, the standout is the lovely Jennifer Westfeldt (writer/star of KISSING JESSICA STEIN, the indie movie), who plays Phyllida Spotte-Hume, an intrepid female explorer who has discovered a lost civilization and seeks to break the barriers preventing women from joining the males-only preserve of the Explorers Club, a group deeply in the shadow of the National Geographic Society (it should be Royal, not National); Ms. Westfeldt also plays Phyllida's aristocratic twin, Countess Glamorgan, who appears in a striking black evening gown, dripping with jewelry. Ms. Westfeldt captures the high-toned accent of the period, exaggerating it somewhat for the countess, while also bringing both feminine independence and inner strength to both roles, yet being just as convincing when circumstances force her to fall into a pre-feminist Victorian swoon.

Vying for her affections are two young men: one is Lucius Fretway (Lorenzo Pisoni), the clumsy and bespectacled hero, a botanist (there is a mildly diverting, if too familiar scene, where the characters get high on cigars made of a plant he cultivated); the other is Harry Percy (David Furr), a character of little learning but full of braggadocio, who claims to have discovered the East Pole (he is the sole survivor of the expedition so his word must be taken at face value). There is humorous friction between the snake-loving Professor Cope (Brian Avers), who wears a potently poisonous cobra around his neck, and his closest friend, Professor Walling (Steven Boyer), whose beloved guinea pig gets eaten by Cope’s snake, leading to a humorous rift in the men’s relationship. Veteran John McMartin plays Professor Sloane, an “arco-theologist,” a specialist in “biblical science,” who claims to have discovered that the Irish are the ten lost tribes of Israel, causing a near revolution when the Hibernians learn that they may be Jewish. Sloane is the principal objector to a woman’s being allowed to join the club’s masculine precincts.

And then there is the weird native Phyllida has brought back from Pahatlabong, the civilization she discovered, a loin-clothed young man she calls Luigi (Carson Elrod), who is painted blue with vivid body markings and wears a multicolored Mohawk. In a situation rife with comical promise, Luigi learns some English and is gradually assimilated into the club’s world, becoming its bartender. In several memorably acrobatic scenes, he mixes drinks and then, in rapid succession, slides across the bar and tosses through the air whiskey-filled tumblers, which are caught with remarkable dexterity by the other members of the cast (only one was barely dropped when I saw the show). There are other characters as well, principally Sir Bernard Humphries (Max Baker), a representative of Queen Victoria who plans on wiping out Luigi’s people because Luigi slapped the queen when he met her (this is how his people greet one another), and Beebe (Arnie Burton), an explorer Harry Percy abandoned on a mountain only for him to become a militant Tibetan monk (or something like that).

All this perhaps sounds very risible and perhaps I'm just a sourpuss. These mostly silly, pompous, and buffoonish characters are ripe for exploitation in the CHARLEY’S AUNT school of theatrical farce, and most of them are played with sufficient straightness of face and lack of excessive archness to prevent them from lapsing too far into the excesses this kind of material sometimes inspires. After Ms. Westfeldt, David Furr, Lorenzo Pisoni, and Carson Elrod, were my favorites, while Arnie Burton as the warrior monk was too broad for my tastes. They all are assisted by Anita Yavich’s wonderful period costumes (I loved the hooded fur coat worn by Harry Percy when he burst through the club doors on his first entrance).

There’s no way that THE EXPLORERS CLUB will bore you, and you may laugh louder and longer than I, so I think I can safely recommend that you gather your explorer's gear and make your own expedition to the City Center. Who knows, maybe you’ll even discover the West Pole.