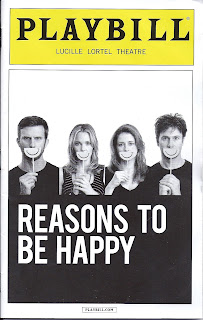 If REASONS TO BE HAPPY sounds familiar, it’s because it mirrors the title of playwright Neil LaBute’s 2008 well-known play, REASONS TO BE PRETTY. That play premiered under the auspices of the MCC (Manhattan Class Company) at the Lucille Lortel, in 2008, before moving to Broadway, where it garnered three Tony nominations although it lasted only 85 performances. Like that play, REASONS TO BE HAPPY is also premiering at the Lortel, under Mr. LaBute’s direction (Terry Kinney staged the earlier work), and also like that play, it works out the dilemmas faced in their interpersonal relationships among the same four working-class characters, Gregg, Steph, Kent, and Carly, although the actors are different and several years have passed since the situations in the first play. 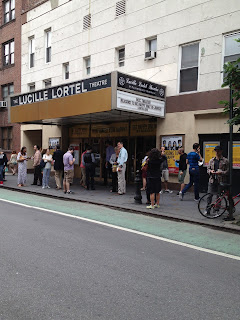 The Lucille Lortel Theatre, on Christopher Street, Greenwich Village
Since, like many prospective viewers, you may or may not remember or have seen REASONS TO BE PRETTY, let's forget about it and look only at its sequel. The playwright has created a neat jigsaw puzzle of relationships to connect these people--all of whom seem somewhere in their early to mid-thirties. Greg (Josh Hamilton), an English teacher currently working as a substitute, is single. His ex-wife, Steph (Jenna Fischer, of TV’s THE OFFICE), a hair cutter, is recently married. Steph finds out that Greg is seeing her good friend, Carly (Leslie Bibb), a security guard, and blows her top, seemingly out of jealousy. Carly’s ex-husband, Kent (Fred Weller), a factory worker, is just as jealous of Carly’s carrying on with Greg. Greg’s romance with Carly seems the incentive for Steph to woo Greg back to her, even to the point where she leaves her new husband. But Greg’s resolve to leave Carly for Steph is crushed when Carly, already a single mother, reveals the positive result of her pregnancy test and makes the feckless but well-meaning Greg’s dilemma even more precarious by threatening to “take care of” the matter. The mix is seasoned with spicy character issues: the autodidact Greg, for all his reading of the classics, is a nice but hapless guy, unable to commit, incapable of saying anything that will hurt anyone, and constantly avoiding saying what’s really on his mind. Steph is a highly strung neurotic, whose educational lapses are skewered for laughs;  for example, she insists Helen Keller was blind but will not agree that she was deaf, and takes personally Greg’s explanation that Keller was also “dumb.” Kent, a jock prone to physical violence, is defiantly unread, and, in one of the most memorable scenes, confronts Greg over what possible use all his reading can have; he measures usefulness in what a person does, not what he knows. The sole grownup in the group is Carly, who, despite the hurt she feels from Greg’s behavior, is the only person around who acts with maturity and reason.


The play opens in the middle of a fierce argument in a parking lot between Greg and Steph; while the production enjoys a wide variety of tempi and emotional levels, it rarely flags after this. I was consistently involved and, unlike THE TUTORS, which I'd seen the night before, it got under my skin despite its imperfections. My wife felt it was perhaps 10 minutes too long, which may be because watching Greg’s ongoing inability to take decisive action as he rationalizes himself out of one confrontation after another can be wearing. He does, finally, in the climactic scene, make a major life choice, which brings the play to a satisfying close, if not necessarily for those on whose lives he has made such an impact.


My principal objection to REASONS TO BE HAPPY (a title that poses a question the characters struggle to answer) is its failure to make credible Greg’s affection for Steph, whose ignorance is worn almost like a badge of pride, while he, even in his vacillating, self-effacing way, is clearly not only well-read but highly intelligent. The relationship seems more like something manufactured for theatrical effect than the reflection of something honest and believable. Carly is also uneducated, but at least she has an admirable sense of herself and of how to deal with life’s complexities. Greg and Steph already were married and divorced. Why on earth he would allow this sometimes shrieking harpy to make him give up Carly and reunite with her is a question the playwright hasn’t solved.


REASONS TO BE HAPPY is performed by a superb ensemble, each of whom makes a memorable contribution toward creating a believable world out of LaBute’s obviously theatrical constructions.  He gives them plenty to work with, of course, with his often scathingly comic wisecracks, and deliciously authentic-sounding, profanity-strewn dialogue, and his satirical enactments of the battle between (and among) the sexes. And, under Mr. LaBute's acutely conceived direction, literally no punches are pulled by the actors. What with so much obviously faked physical contact in today's theatre, audiences may taken aback to see characters actually slap-shoving, face-slapping, and arm-punching each other, even though no fight specialist is credited.

Mr. Hamilton’s role is the play’s fulcrum, and he appears in nearly every scene, all but one of which is a two-hander, with only one involving three actors—when Greg must make his Solomonic decision over whether to choose Carly or Steph. I can already see some of these scenes becoming standards in future acting classes. But it will take an exceptional actor to capture Greg’s shiftless irresponsibility as artfully as does Mr. Hamilton.

The show’s technical and design elements all contribute to the smoothness of the production, which moves back and forth between various outside settings, portrayed abstractly, and the single, realistic indoor setting. Neil Patel’s set shows the outside world as a backdrop of vertical plastic strips, like those in food stores that protect the cold environment of the meat products from the outside temperatures. Downstage for most of these scenes are two benches, but, even under the exquisite lighting of Ben Stanton, who creates wonderful effects against the plastic background, the shadowy figures of stage hands moving the benches are intrusive. The interior setting shows a factory kitchen cum lounge area, a highly realistic space (complete with actual soft drink coin machine), illuminated by bright fluorescent lighting, where ugly blasts of sound from a loudspeaker regularly punctuate the action as time markers for the employees. Hearing them in the theatre is annoying enough; hearing them daily in a factory would drive most people nuts. Are they intended to suggest the horrendous working conditions that have driven at least three of the characters—Greg also used to work here—to behave as they do? Or are they meant as warnings to the characters to get on with their lives already? Sound designer Robert Kaplowitz also gets to provide some thumping heavy metal music to cover the many scene shifts.


Despite my cavils, I had many reasons to be happy with REASONS TO BE HAPPY, and it’s likely that audiences will be equally happy to have seen it.
Posted by Samuel L. Leiter at 11:00 AM