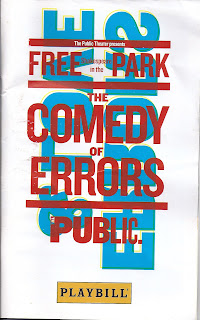 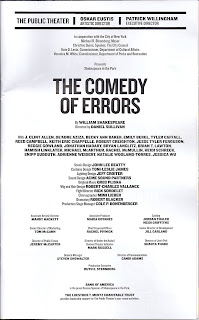 Shakespeare’s THE COMEDY OF ERRORS is back in all its clever mistaken identity silliness as the opening salvo in this summer’s two-play Shakespeare in the Park series (a new musical version of LOVE’S LABOUR’S LOST will follow). Director Daniel Sullivan has found an appealingly satisfying, more or less contemporary world in which to set this cacophony of comic confusion by moving the action to the swing music era of the late 1930s and early 40s.  An atmosphere of rhythmic fun is established in a preshow boogie woogie display (choreography courtesy of Mimi Lieber) by a terpsichorean ensemble of half a dozen or so light-footed dancers; the same performers go on to serve throughout the show by moving scenic pieces off and on in splendidly choreographed bits that avoid the need to bring on intrusive stage hands. At the end of the play, they join the rest of the company in a final dance that perfectly captures the classical imperative to end a comedy with a scene of romantically-inspired celebration. 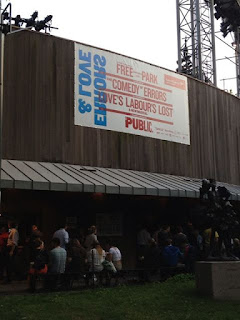 Outside the Delacorte Theatre.


There are many other charmingly inventive moments in this generally enjoyable, if not always laugh-worthy revival, such as the idea of having the Duke of Ephesus (Skipp Sudduth) played as a Mafia don with a New York hoodlum’s accent, supported by gangster attendants who pull out their gats at the drop of a hat. Adriana (Emily Bergl), Antipholus of Ephesus’ wife, and her sister, Luciana (Heidi Schreck), are both blonde bombshells straight out of a screwball comedy starring Carole Lombard or Jean Harlow. When Antipholus and Dromio of Ephesus take sanctuary in a priory, the abbess (Becky Ann Baker) and her nuns protect them with tommy guns. Dr. Pinch (Jonathan Hadary, who also plays the Antipholuses' father, Egeon) is portrayed as an eccentric, Viennese-accented shrink (“Ach du lieber,” he interpolates at one point), who attempts to psychoanalyze the straitjacketed Syracusan twins on his analyst’s couch. But the most challenging directorial choice is to have both the Antipholus and Dromio twins played by only one actor each. This requires some very fast maneuvers to allow the characters to enter a building on stage only to reappear only moments later from one of the vomitoria under the auditorium seating, but it also means some editorial script work to allow silent doubles with their backs to the audience to cover the concluding scene when all four twins must appear on stage together. 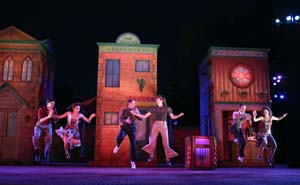 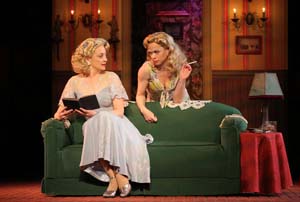 Heidi Schreck, left, and Emily Bergl. Photo: Public Theatre
Sullivan has created lots of physical comedy to keep the action moving at an insistently energetic clip, and the actors are all up to the athletic demands of pratfalls that sometimes have them tumbling off the stage. But the effect throughout is to push every moment for comedic values, through both exaggerated line readings and broad gestures, as if this very talented director saw the need to cover weaknesses in the actors’ ability to be truly funny on their own. I've always felt that the funniest farce is that which makes you believe in the basic human desires of people trapped in impossibly complex situations; when the actors become more concerned with milking their lines and business for audience reactions than with evoking the humor in their dilemmas by combining full belief in what’s happening to them with innately clownish qualities, the effect is to point attention to their technique and away from their sincerity. Hamish Linklater, whose roles as the two Antipholuses require him to differentiate their essential natures despite their identical physical appearances, succeeds best at being both human and amusing, if not hilariously so, especially in the long, applause-generating speech he delivers toward the end as Antipholus of Syracuse when. But Jesse Tyler Ferguson, so delightful as one of the gay lovers on TV’s MODERN FAMILY, seems better suited to light, dry, self-effacing comedy than broad, slapstick farce, and his efforts in what should be the play’s funniest parts seem forced and inorganic.
Emily Bergl, left, Hamish Linklater and Jesse Tyler Ferguson, on couch, Jonathan Hadary, behind couch, and Heidi Schreck, right. Photo: Public Theatre
A photo in the program shows the 1967 Central Park revival, which used three separate Italian Renaissance buildings set in a town square. A similar idea informs John Lee Beatty’s honey of a set, although the buildings, all of which are built on turntables to offer multiple views, are mid-twentieth-century American; one says Public Baths, another bears a poster for the 1933 Eddie Cantor movie ROMAN SCANDALS, and the third has a sign saying Adirondack Transit Lines, suggesting that the Syracusan twins come from the city of that name in upstate New York. Just as visually effective are the colorful period costumes of Toni-Leslie James; the silky dresses worn by Adriana and Luciana are especially delicious, and the way in which the similarly garbed twins are subtly differentiated by slight differences in their otherwise identical hats is cleverly handled. As usual for Delacorte productions, the lighting  (by Jeff Croiter) contributes its magical effects as the evening sky darkens and the audience’s focus increasingly turns toward the stage and away from the surrounding distractions of the park and itself. (I confess, though, wanting to murder two nearby spectators for continually checking their phones for messages!) Music, too, makes its valuable contribution , both the period pieces (such as Benny Goodman recordings) and original tunes, composed by Greg Pliska, including a jazzy “Hey, nonny, nonny” song delivered in soul singer style by the Courtesan (De’Adre Aziza).


While it is easy to enjoy the many bright ideas brought to its staging, the major error of which this comedy is guilty is its inability to be funny on a gut level and not a conceptual one. One can appreciate its goals but if you (or, at least, I) don’t react with authentic (as opposed to respectful) laughter, then the fun remains somewhere in your brain but not in your heart.