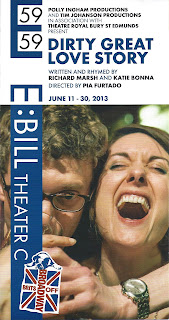 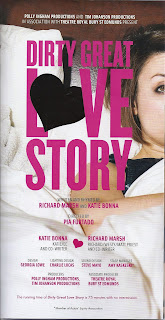 The latest entry in the Brits Off Broadway series at 59E59 is this charming, funny, affecting, two-actor love story, written (and rhymed, as the program credit says) by its costars, Richard Marsh and Katie Bonna, who, judging by the names of their characters, play themselves. Ms. Bonna also plays her friend CC, who has a conversational tic of saying “I love it!,” with great enthusiasm, while Mr. Marsh displays his role-playing versatility by assuming the northern England accent of his friend, Westy, and the snooty tones of Matt Priest, his Eton-educated rival for Katie’s affections.


The performance, well-directed by Pia Furtado, is given in the 59E59’s tiny Theatre C on the third floor. One can see why it was selected for importation from England, where it underwent development at multiple locales before premiering at the Pleasance Edinburgh in August 2012, followed by productions at the Bristol Old Vic and the Theatre Royal Bury St. Edmunds earlier this year. It requires nothing but its very casually dressed actors, a pair of blank screens behind them to offer a background for simple lighting effects (by Charlie Lucas), and two stools (set design by Georgia Lowe). Well-timed sound and music effects (by Steve Mayo) offer all the ambience we need.


The material, which is admittedly thin and familiar, tells of a young man and a young woman who meet in a pub or club (I’m not clear which and it makes no difference) when he’s with his friends at a stag-do (bachelor’s party) and she’s with hers at a hen-do (bachelorette party). The curly-haired Richard, who vaguely resembles David Letterman, is geeky and bespectacled, while Katy, who reminds me of a young Emma Thompson, both vocally (that posh accent) and physically, is attractive in a nonthreatening way. Each has had romantic problems and each is searching (with the aggressive encouragement of friends) for someone to marry. The plot goes through the usual permutations: boy meets girl, boy and girl get drunk and have sex, boy and girl go their separate ways without realizing how much the other one means to them, boy and girl have unsuccessful liaisons with other lovers, boy and girl quarrel, but, in the end, after two years, boy and girl finally admit they love one another.


What makes this potentially banal material engaging is 1) the marvelously British tone the actors bring to their vivid characterizations of these wry but lonely young singles, and 2) the terrific writing, all of it in verse, both rhymed and blank. Many of the lines spoken with a definite rhythmic undertone; still, the words always sound natural and spontaneous; the effect is nothing like hip hop. The dialogue contains lots of young people’s language, much of it profane, and there are numerous texting abbreviations, such as OMG and LOL, sprinkled throughout.


Mr. Marsh and Ms. Bonna speak their lines, many of them delivered in narrative style directly to the audience, with great earnestness and honesty. Bonna is particularly colorful with her captivating facial expressions, which often make ordinary lines stand out because of how her adorably flexible mug comments on them. Because of the proximity of the audience to the actors, after watching this couple for 85 intermissionless minutes, you feel you have really gotten to know them; even more, you’ve grown to like them.


Here’s a sample of a sequence spoken during the scene when Katie and Richard realize they’re in love. Katie says:


I kiss the soft lips


In the geeky face,


In the stubborn head,


Of the man I woke up next to one day in bed,


But every question I could have,


I can see more with my eyes closed now,


Than when they were open and booze-soaked and red.


Or when I was blinded by You Know Who,


Or when I chose Matt Priest instead,


And what I need


And I fucking love him for it.


DIRTY GREAT LOVE STORY is one of those tasty little tidbits you sometimes bite into when circulating among the smorgasbord that is New York theatre. It goes down nicely, is quickly digested, and leaves you still hungry for the main course yet to come. It may not have filled you up, but you’re happy you ate it.
Posted by Samuel L. Leiter at 8:52 AM