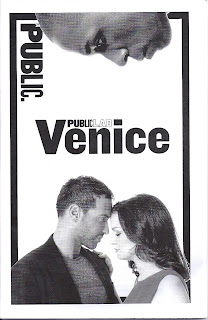 Shakespeare has long been a tempting, if problematic, resource for theatre artists seeking to mine his familiar plots and characters, if not necessarily his language, for opera and musicals. VENICE, in the Anspacher Theatre at the Public, is the latest in this lineage of Shakespeare to musical transformations, and not among the most successful of them. Its source is not THE MERCHANT OF VENICE but OTHELLO, although Eric Rosen’s book treats that classic very loosely, more as an inspiration than a model to be faithfully emulated. There are major characters of whom Shakespeare never dreamed, plot situations that are new, and plot twists and character developments whose resonance can only be fully appreciated if you know the original.


A Clown MC, played by the show’s talented composer and co-lyricist, Matt Sax, serves as a kind of black-garbed CABARET-like mediator, introducing the story and interposing himself in many scenes, as he delivers his hip-hop musical patter while also showing off his versatility with slick dance moves and strong singing chops. He works on a set by Beowulf Boritt composed of simple scaffolding and platforms set against a background effectively lit by Jason Lyons, all of it resembling some of the numerous Shakespeare productions given in this venue over the years. Jason H. Thompson’s projections, both still and moving, as well as video sequences, include numbered titles for each scene, such as “Citizens of Venice,” “Sunrise,” “Liberation: Pull Up the People,” “Never Wish War on a People,” “Poison,” “Put Out the Light,” etc., which also are the titles of each scene’s principal song.

With the help of projected text we learn that the city of Venice underwent a brutal war twenty years earlier, during which 20,000 people were killed and the city destroyed, with the elite citizens setting themselves up behind a wall in an area called the Safe Zone, ruled by Westbrook Enterprises, which has set up a military occupation that oppressively rules over the population in the rest of the city. (“If you see something, say something,” people are warned.)The specifics of what led to this situation are very vague, but we do know that the downtrodden citizens are massing for a revolution to reunite the split city by tearing down the wall, and that their leader is a young man named Venice Monroe (Haaz Sleiman), obviously based on Othello. He was separated at age seven from the Desdemona character, Willow Turner (Jennifer Damiano), the privileged daughter of the assassinated president, who lives in the Safe Zone but is actually on the side of the revolutionaries. She and Venice Monroe are lovers (this all becomes very muddy), despite their long separation, but the autocratic leader of Venice is another young man, Theodore Westbrook (Jonathan-David), who is also in love with Willow, and becomes Venice’s principal rival. Then there is the Michael Cassio character, here called Michael Victor (Claybourne Elder), who serves as Venice’s right hand man and is no longer the object of the hero’s jealousy. And, of course, we have an Iago avatar, Markos Monroe (Leslie Odom, Jr.), Venice’s black half-brother.

Venice is the child of a rape, you see, which presumably explains why Venice is light skinned [the actor is from Lebanon] and Markos is dark; you may recognize the actor as Sam from TV’s SMASH. Perhaps I should mention that, in a dream scene, the freedom fighter mother, Anna (Uzo Aduba) materializes, so the rape can be staged, a totally unnecessary intrusion of fantasy into the action. Markos is a general, the leader of the military occupation, so his opposition to Venice is based on both personal and political jealousy. His wife Emilia (Victoria Platt), whom he coolly manipulates to serve his purposes, bears the name of her Shakespearean counterpart, and she more or less serves a similar dramaturgic purpose.
There’s no need to go into all the complex and extraneous plot developments; the point is that the theme of sexual jealousy regarding Desdemona’s alleged infidelity that dominates OTHELLO, while still present, has been watered down (a letter becomes a crucial prop instead of Desdemona’s handkerchief), with the new character of Theo made the potential transgressor, thus turning the conflict into one political as well as love rivalry. There are many issues that remain vague or inconsistent; all we need to know is that there are two factions fighting for dominance with mixed motives and that the good guys simply want peace and liberation. The show includes themes of personal and political trust and betrayal, marital unrest, political ambition, romance, and violence, but it is rarely emotionally involving and, at nearly two and a half hours, is overlong. Given the array of talent and professionalism on display, it is frustrating to be in their company for so long without caring at all what happens to them. The human dimension simply gets buried under all the technically proficient  but essentially banal sound and fury. And, except for a stray laugh or two, the mood is determinedly grim and lacking in humor.


As in so many contemporary musicals, the music is generic with largely unmelodic melodies. The lyrics for most songs are intended to carry the narrative, which would be fine if they were at least able to also overcome their cerebral qualities and affect one’s feelings. We get lots of vocal and rhythmic pyrotechnics, but the music and lyrics have little emotional resonance. Chase Brock has created a lot of dance movement for the dynamic and focused company but, like the hip-hop and rock-based music, while often clever, it seems overly familiar and, ultimately, uninteresting.


At the end, despite the unresolved political conflict, the survivors behave as if they’ve achieved victory, singing that “I can see the sun rise,” and “give us just one moment to shine,” the effect somehow being strangely reminiscent of “Let the Sun Shine In” in HAIR. The cast takes its curtain call to an insistent rhythm that gets the audience clapping along with them, so it wasn’t surprising to overhear audience members leaving the theatre speaking in energized tones about how much they’d enjoyed the show. Me, I’d have rather been in Venice.
Posted by Samuel L. Leiter at 10:48 AM