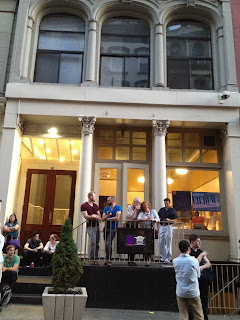 The Flea Theatre, on White Street, in Tribeca.


Once again, the Bats, the always dynamic and often arrestingly talented young, non-Equity, resident acting company at the Flea Theatre in Tribeca, are demonstrating their vitality and panache. As usual, they begin the evening by hanging around the performance space, chatting happily with one another and with friends or anyone else in the audience (the small stage and extremely limited seating area are in very tight proximity), or even playing ball. Their oddball vehicle, cleverly directed by Benjamin H. Kamine, who staged last season’s JOB by Thomas Bradshaw here, is in the Flea’s tiny basement venue, but, as usual, these inventive artists have found a way to make the severely limited space resound with excellent sound effects and music (Jeremy S. Bloom), arresting lighting effects (Jonathan Cottle), creatively inspired low-budget scenery (David Meyer), and energetic movement.

Unfortunately, Christopher Oscar Peña’s a cautionary tail (as he spells it), a bizarre mingling of naturalism, surrealism, and even Chinese opera, is overlong at nearly two and a half hours; the intermission, which lasted over 20 minutes, required the audience to leave the theatre while the scenery for act 2 was set up, but the balmy early summer air outside was an inviting reprieve from the un-air conditioned stuffiness downstairs.

This rambling, multi-scened mixture of comedy and drama focuses on the sibling friction between a gay Chinese-American brother, Luke Wood (an excellent Tony Vo), and his older sister, the violin-playing Vivienne (Cleo Gray, quite good), who are portrayed realistically, and the cruel power over them exercised by their ruthless mother, Tiger. Tiger is well played by Bobby Foley,  a slender male actor in a weird drag getup consisting of a yellow robe tightly cinched at the waist, black gloves, a large fan he sharply snaps open and shut, and a headdress and makeup influenced by Chinese theatre. Tiger is surely the monstrous incarnation of the ultimate Tiger Mother, that much-discussed Chinese-American parent who, to some critics, suffocates her children with excessive pressure to guarantee their entrance into the top schools.
Bobby Foley as Tiger in a cautionary tale. Photo: Hunter Canning..
A number of subjects and themes arise during the action, including abortion, interracial romance, college and career choices, homosexuality, teenage promiscuity, identity, revenge, retribution, social media (there’s a scene about Facebook), tai chi, maternal domination (and its comeuppance), sacrifice, and female employer-male employee sexual power playing;  aside from its reference to the man’s need to be a tiger to succeed (Foley plays the meek male employee), what this scene was doing in the play beats me. There are phantasmagorical scenes involving a weird Mephistophelian insurance agent, who barges into people’s apartments, and others showing the torments of hell, depicted with an imaginative set of cloth stalactites and elastic ribbons. This being something of a coming-of-age drama, the characters, seen mostly in their teenage years, return a decade later in their maturity, and we see how far (or not) they’ve evolved from who they were before (see THE ASSEMBLED PARTIES for a more effective use of this device). Many scenes or scene breaks involve the large and very well-drilled ensemble doing rapid Chinese theatre and martial arts based movements, but what they all have to do with one another is not especially clear. Without them, however, this would be a less interesting presentation, so you take your pleasures where you find them.
Cleo Gray as Vivienne in a cautionary tail. Photo: Hunter Canning.
I was curious about why the title uses the word “tail” so I asked one of the actors on the way out if he could explain. He said it was a play on words, a reference to the tiger’s tail. Oh, thanks, I said, and moved on, still uncertain not only as to what that implied, but about many other things in the play. (There’s also an unrelated, new animated film, with the voice of Cate Blanchett, which uses the same title.) Still, it was in keeping with the spirit of other unconventional plays I’ve seen in this space with the Bats, and it gives this always refreshing group a playground for continuing to make offbeat theatre.