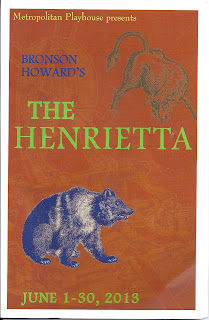 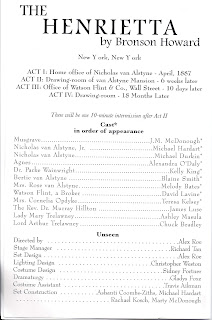 The Metropolitan Playhouse, on E. 4th Street between Avenues A and B in Alphabet City, a theatre of around 70 seats, is in its twenty-first season, although its practice of reviving plays from the American theatrical heritage began in 1997. Its latest offering, which closed on June 30, when I caught it, is THE HENRIETTA, a hit comedy-melodrama from 1887 by the now largely forgotten Bronson Howard who, in his day, was one of the most popular and respected of commercial playwrights. The play even created a phrase, “business is business,” that is still in circulation to excuse the amoral attitude of earning a buck regardless of who gets hurt in the process. A still viable 1920 silent movie, THE SAPHEAD, based on the play and a later novel by Victor Mapes and Winchell Smith, and starring the great Buster Keaton in the role that made him a star, can be seen on YouTube.
Productions at small companies like this must be applauded for their valiant efforts to serve important academic and artistic ends on the flimsiest of budgets; producing a play from 1887 requires clever management to recreate a sense of period and style, and one must assess the quality of what one sees within the framework of very limited financial means. 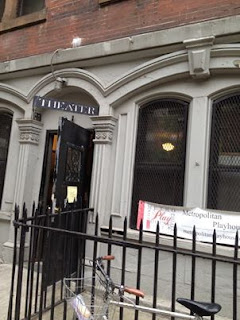 The Metropolitan Playhouse, 220 E. 4th Street
In the present case, costume designer Sidney Fortner has done a splendid job in dressing her cast of a dozen to look like well-to-do people of the late 19th century, and even the minimal sets, by Alex Roe (who also directed), which require some effort of imagination on the audience’s part, satisfactorily capture a feeling for the era—a potted palm or two goes a long way in this regard. The principal problems, as usual, arise in the area of acting and direction, but first a word or two about the play.
The odd title, THE HENRIETTA, refers to four different Henriettas, two of them people, one a horse, and one a mining and land company. There is much comic confusion about just which one people are talking about at various times, but it is the mining and land connection that is the most important, since this is a business comedy focusing on Wall Street rapaciousness. The plot revolves around a ruthless but charming millionaire widower named Nicholas van Alstyne (Michael Durkin) and his family, which includes two sons, the immoral Nicholas, Jr. (Michael Hardart), who seeks to cheat his own father out of his fortune, and the comically innocent but dandified Bertie (Blaine Smith), who becomes, in spite of himself, the “young Napoleon of Wall Street”; another sibling is Lady Mary Trelawney (Ashley Masula). Nick, Jr., is married to the lovely Rose (Melody Bates), Bertie loves the pretty Agnes (Alexandra O’Daly), and Mary is the wife of the awfully British aristocrat, Lord Arthur (Chuck Bradley). Other characters include an upstanding physician, Dr. Parke Wainwright (Kelly King); a society minister, the Rev. Dr. Murray Hilton (James Luse); a stock broker, Watson Flint (David Lavine); a wealthy, middle-aged woman, Mrs. Cornelia Opdyke (Teresa Kelsey); and a clerk, Musgrave (J.M. McDonough). All but the clerk are involved in romantic complications, which work in counterpoint to the ups and downs of the stock market speculation (a ticker tape plays an important role in act three) that keeps the plot’s other motor going.
Most of the actors struggled to combine period manners with inner sincerity and comedic truth. Michael Durkin’s Wall Street baron came closest to making his character believable, and Teresa Kelsey and Kelly King had their strong moments, but most of the others teetered precariously on the border between amateurism and professionalism, sometimes leaning one way, sometimes the other. James Luce as the minister gave what was surely the oddest of overblown performances. Alex Roe’s direction needed to have the actors pick up the pace; a good ten minutes or more could have been lopped off from the play’s two hours and 35 minutes running time. Mr. Roe worked hard to bring some invention to the staging, but most of his comical ideas, such as having two lovers walk off hand in hand so their joined hands could collide with a potted plant, fell flat. The idea of allowing the actors to speak their many asides directly to specific audience members was mildly effective in the tiny venue, but it gradually grew cloying.
THE HENRIETTA is a well-crafted if somewhat old-fashioned play that deserves revival, but this production doesn’t quite measure up to its demands. Nevertheless, it was fun to see a play from 126 years ago whose greedy characters seem straight out of today’s era of the one percent.