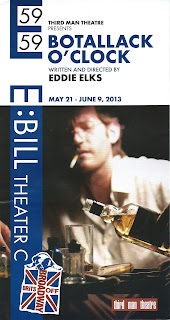 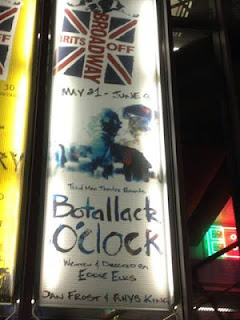 Roger Hilton (1911-1975) was a major abstract painter who came to prominence in the post-WW II years. He lived at Botallack, in west Cornwall, UK, which gives BOTALLACK O’CLOCK, Eddie Elks’s play about him, part of its odd title. The other part comes from a poem cited in the play, W.S. Graham’s “The Lines in Roger Hilton’s Watch.” The play comes to us from England's Third Man Theatre as part of the Brits Off Broadway season at 54E59, where I saw the marvelous CORNELIUS the night before.
It’s difficult not to call this a biographical play, but you can get more biographical detail about Hilton’s life from Wikipedia than you can from the play: http://en.wikipedia.org/wiki/Roger_Hilton. I wasn’t familiar with his work before seeing this play, but one of the images shown, of a dancing nude with one breast flying wildly, was definitely familiar. Would that Elks’s play, also directed by him, were not only as playful but as beautiful as some of Hilton’s work.

As an online search will quickly demonstrate, Hilton’s paintings were often joyously colorful, with a childlike, primitive quality, while ranging from the surrealistic to the more figurative. The play attempts to capture the essence of the man's persona but the artistic result, except for when some of his paintings are highlighted, or when an actor dressed as a bear emerges from a wardrobe (me you're asking?), like a creature from a book by C.S. Lewis, is largely dark and dingy.


BOTALLACK O’CLOCK borders on being a one-man play, since the only actor on stage is Dan Frost as Roger. However, the dialogue is carried out in conversation between Roger and his radio, which is seen as a dreamlike living entity, with a strong presence that expresses itself not only vocally but by flashing on and off when it gets worked up. Roger often has to hit it with a stick to make it stop, and he keeps threatening to bring it in for repairs. (In some senses, the play is reminiscent of KRAPP'S LAST TAPE.) The premise is that the radio is interviewing the artist, but the entire work is written and performed in a manner that seems to be emulating the artist’s eccentric style, so even when Roger’s more straightforward comments are being delivered, the character is either being whimsical or confrontational, and, since Mr. Frost speaks in a not always very clear dialect, very little of it registers as significant, no matter how informative it is on the page (I read the play on the subway ride home).


Hilton was an alcoholic whose drinking caused him to be bedridden in his later days, forcing him to paint while lying on one side in bed, his painting arm dangling off the side and the paper he painted on being on the floor. The fact that alcoholism was the reason for his illness comes from Wikipedia, by the way, as it’s barely intimated in the writing. He lives in a filthy bed, with crap all over the floor, from discarded paint jars to discarded food tins and other detritus (no set designer is credited); a single hanging lamp over his bed is his principal illumination. He smokes constantly and, of course, has a bottle of whisky at the ready. A large jar containing a single dill pickle plays a part at one point, but why anyone should care is a major question.


Biographies have been written about this talented artist, and there have been attempts to make a film of his life, including one starring John Hurt. Perhaps his life is worth dramatizing. Other famous artists have had their lives turned into books and plays, and there is always interest in finding out what influences led to the world's great works of art, be they visual, literary, or musical.  I’m just not sure that Roger Hilton was of the stature to demand such attention, and, from what I gleaned from BOTALLACK O’CLOCK, nothing in his life as a drunk, profane, and ailing artist seems much different from the stories of other artists whose lives we’re already familiar with.
Posted by Samuel L. Leiter at 8:12 PM