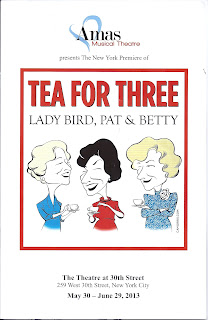 
I’m not sure how much interest there is in a one-woman show about the wives of the three presidents who governed America during the years following John F. Kennedy’s assassination, or even how many people below the age of fifty would immediately recognize the people referred to by their first names in this play’s title; it does seem, however, that women in American politics—even if political only by marriage—are increasingly present on local stages. Last season, in the one-woman play category, we had Austrian playwright Elfriede Jelinek’s abstract examination of Jackie Kennedy in JACKIE, starring Tina Benko, and ANN, by and starring Holland Taylor, while in more conventional plays we got to know Mary Todd Lincoln (A CIVIL WAR CHRISTMAS) and Pat Nixon (CHECKERS). Now Elaine Bromka, who played eight first ladies opposite master mimic Rich Little in THE PRESIDENTS on PBS, is performing three of them in TEA FOR THREE: LADY BIRD, PAT & BETTY at The Theatre at 30th Street, ordinarily referred to as Urban Stages.  In this 80-minute solo exercise, written by Eric H. Weinberger with Ms. Bromka, and directed by Byam Stevens, the star offers three biographical vignettes, beginning with Lady Bird Johnson, followed by Pat Nixon, and concluding with Betty Ford.


As might be expected, for all the revelations and anecdotes provided here, many of them well known, none of these women would be on our radar were it not for the fact that their husbands were American presidents, but we do get to glimpse, if only superficially--since each is given only about 25 minutes--what being married to the world’s most powerful man might have been like for them. The play is performed on a stage backed by black curtains on which a few picture-less frames are hung, with antique furniture spread about, the effect being that of a sitting room at the White House. As Ms. Bromka changes wigs and costumes from one role to the other, a stage hand comes out to move the furniture about and change the pieces as per whatever decorative alterations the new first lady has authorized. These moments tend, as they always do, to slow the performance down considerably.


Each character is impersonated with the appropriate accent, and with wigs and clothing meant to conjure up an illusion of the real person. The effect is uneven, since Ms. Bromka doesn’t resemble the originals, although, with her slightly hooked nose, she comes closest to capturing Linda Bird Johnson. She is physically most distant from the famously thin Pat Nixon, and manages a reasonable Betty Ford, but more by her manner than her looks.


Linda Bird, dressed primly in a red, A-line dress with a collar trimmed in black, and speaking in a distinctive southern drawl, is a shy, admittedly subservient woman who saw it as her duty to tend to every little thing her husband needed, and about whom it was quipped that she would, if necessary, crawl down Pennsylvania Avenue on shards of glass for him. We hear familiar stories about Lyndon’s personality, his famous lifting of his shirt to show the scars of his gall bladder operation, his various health issues, some of his major accomplishments (principally the Civil Rights Act of 1964), his unpopularity because of the Viet Nam War, and his decision not to run for a second term. We learn that Linda Bird was not especially happy bearing the burdens of being a first lady, but she comes off as a gracious and pleasant woman of no great personal attainments (she struggles to retell a joke). As with the other presidents’ wives, she basks in the reflected glory of her husband.


Pat Nixon, of the three wives, suffers the most in the role of first lady because of the hatred her husband generated, and is even convinced that Watergate was a conspiracy cooked up by Richard Nixon’s enemies to unseat him. She reveals a great antipathy toward public speaking, or even being interviewed (an interview with Barbara Walters proved terribly disappointing when Pat intended to talk about her travels in Africa and Walters asked about everything but). As with Kathryn Erbe’s Pat Nixon in CHECKERS, the character garners sympathy because she seems so emotionally unfit for the role history has given her. Having to endure her husband’s resignation must have been agony for the real Pat, but because of time constraints the play doesn’t allow Ms. Bromka to more than hint at what she went through. The emphasis, as it is for all three women, is generally upbeat; no one ever loses control.


Most vivacious is Betty Ford, onetime Martha Graham dancer and model, who appears for most of her segment in a silk dressing gown, and then changes before our eyes into a periwinkle blue, polka dot number with a silk carnation placed near the high neckline. Betty is a cutup, a free spirit, and the only first lady who truly loved the limelight and the opportunity to use her office to do good. Even though she was the wife of a Republican president, she supported abortion rights and the ERA, choices that made her both hated and beloved. We note her alcoholism (a glass of gin or vodka is in her hand throughout) and painkiller addiction (she suffered from a pinched nerve in her neck), but also learn of her recovery from a mastectomy that led to her being a major force in bringing breast cancer awareness to the American public.


Ms. Bromka may have starred in multiple roles opposite Rich Little but she does not have his enormous talent for impersonation. Despite the changes in wigs, costumes, and accents, she uses many of the same gestures, facial expressions, and physical reactions for all three women, and the timbre of her voice remains the same throughout. Still, she has a strong and warm stage presence and keeps the audience attentive to each character’s story, even though the writing, for all the research it represents, cannot always avoid bordering on the banal. Much of it struggles to gain dramatic traction but has no serious foils with which to contend. These are not mini-dramas; they are rambling, one-way conversations with the audience, and you take what drama you can find from the occasional crises to which the characters refer.


TEA FOR THREE is a respectable exercise in solo performance, but the people it focuses on are never deeply enough explored to bring it to the next level. Nor is it certain that even if the play focused on only one of these women the resulting drama would be compelling enough to make us care that deeply about her.