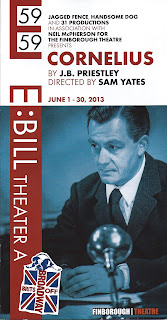 It’s a good feeling to go to the theatre and come out feeling that the first thing you want to do is let everyone else know how much you enjoyed yourself. That’s how I felt when I emerged from Sam Yates’s sparklingly intelligent staging of J.B. Priestley’s CORNELIUS at 59E59, where it is the latest entry in that venue’s Brits Off Broadway season. The play, subtitled, “A Business Affair in Three Transactions,” bombed when it premiered on the London stage in 1935, starring the great Ralph Richardson in the title role; oddly, it was not given a British revival until 2012, but is surely going to be seen more often now. That production, a hit at the Finborough Theatre, a respected Off West End London venue, has been shipped here, almost intact, for a month-long run, and makes the revivals of forgotten plays on view at New York theatres like the Mint and Pearl look like cardboard cutouts. There is nary a false note, from David Woodhead’s marvelously realistic yet theatrically ideal office setting to the same designer’s exactingly honest 1930s costumes (with believable period hairdos to match) to Howard Hudson’s thoroughly evocative lighting. And the cast, led by the absolutely brilliant Alan Cox as James Cornelius, is as high quality a team of well-trained British actors as you could dream of, despite there being not a single star of note.


The entire play is set in the office of Briggs and Murrison, aluminium (aluminum to you Yanks) importers. A large, opaque window at the rear bears that name, seen in reverse from inside, and there are various desks, chairs, phones, and other office paraphernalia one might find in a typical London firm of the mid-1930s, all of it meticulously chosen for period authenticity. The walls are somewhat shabby, and the wallpaper is beginning to peel near the upper molding. Briggs is dead, and the partners are Robert Murrison and James Cornelius, but Murrison has been gone for weeks, traipsing around the North Country in desperate search of customers. Business has turned sour because of various international economic developments, and those in the home office are struggling, under James Cornelius’s guidance, to stave off bankruptcy. A meeting of creditors is scheduled for that afternoon, and Murrison’s arrival is anxiously expected, but, for the time being, Cornelius, whose supremely enthusiastic, romantic, and optimistic behavior is actually a cover for feelings of loneliness and depression, is holding things together. His earnest staff consists of Biddle, an aging numbers cruncher played with quiet charm by Col Farrell; Lawrence (David Ellis), a petulant 19-year-old office boy fed up with his lack of advancement after working here for five years; Miss Porrin (Pandora Colin), a plain Jane secretary with a secret crush on Cornelius; and Judy Evison, a pretty stenographer with a gift for singing who joins the firm by taking her sister’s job when the latter is forced to quit for personal reasons. 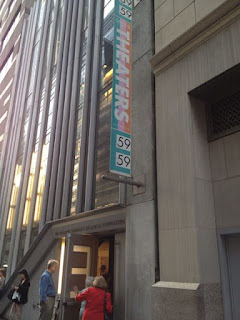 
Into the office barge various peddlers, who are treated rather brusquely by Cornelius, but one of them, a young fellow weak from lack of food, offers the playwright a chance to look at the unemployment situation in Britain at the time. Cornelius’s pep talk to this peddler brims with contemporary relevance in its inability to comprehend how an intelligent, able-bodied man can fail to find suitable employment, if only he puts his mind to it. In this and other scenes, the play’s reflection of 1930s economic issues, and the growing power and ruthlessness of global capitalism, seem strikingly of today; the problems register even more strongly because of Priestley’s incisive dialogue and character depiction. Priestley, of course, was an outspoken socialist, and the circumstances of his play allow for his cogent commentary.


Ultimately, the creditors appear, offering the desperate Cornelius a marvelous opportunity to go off on a memorable tangent about the destructive tendencies of modern capitalism, until Murrison (Jamie Newall) finally stumbles in, a haunted, paranoid wreck, whose behavior (which turns out to be a deliberate ploy) manages to scare off the creditors, but whose imminent demise is signaled when he enters with a pistol in his hand at the end of the first act. Act one, for all its dramatic effects, is riddled with laugh out loud moments, but act two tones down the comic undertones, although not completely, to resolve  both the fate of the company and the personal relationships, including romantic ones, among the members of the firm. There is a wonderful moment when Cornelius ponders, with Biddle countering him, what happens to a person when he dies. Will Cornelius follow the path taken by his partner, or will he somehow find courage in the words of a treasured book about exploring in Peru that has the line, heard more than once during the evening: “After a week in the Indian village—we decided to take the track into the clouds—to find among those heights the lost city of the Incas.”


With the minor exception of Xanthe Patterson as an attractive but too soft-spoken peddler, the acting  is everything you could hope for in a period piece like this, with all the carefully observed accents and mannerisms of the characters fully brought to life. I have a slight cavil concerning a couple of actors who play minor roles early in the play and then reappear as creditors, because they do so without significant enough changes in their physical appearance to avoid confusion. On the other hand, there’s no confusion about the two roles played by Beverley Klein, one the cleaning woman who allows for useful exposition at the play’s opening, the  other an expensively dressed woman of wealth, whose father owns the building in which the firm is located, and who sits in for him at the creditors’ meeting. Alan Cox plays just one role, of course, but his three-piece suited, pipe-smoking, vocally and physically assured Cornelius is so distinctive, multilayered, honest, lyrical, comedic, and touching that it will be a benchmark for the season; I look forward to seeing it equaled, although I doubt it will be topped.


CORNELIUS is truly a lost gem, one that has been polished and refined to near perfection, and that you will be happy to wear as a glowing theatre memory.
Posted by Samuel L. Leiter at 11:01 AM