Seeing the half-filled auditorium at the Atlantic Theatre Company’s for a Saturday matinee performance of John Guare’s intermissionless bill of three one-acts, titled 3 KINDS OF EXILE, whose theme is announced in the title, was unsettling. Did it hint that the production had inspired spectators to choose a kind of self-exile and stay away? Although the work is problematic, especially the tiresome third piece, it has its redeeming features.  Still, it’s not easy to encourage people to rush to W. 20th Street to catch what can only be described as a very mixed bag. 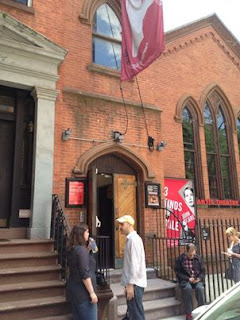 Atlantic Theatre Company
The Atlantic, which can usually be counted on to invest in interesting scenic surroundings, has gone minimalist here, with designer Takeshi Kata providing only a set of simple curtains surrounding the acting space for the first two plays, “Karel” and “Elzbieta Erased,” and with the curtain suddenly dropped to reveal the bare brick walls for play number three, “Funiage.” Donald Holder’s lighting does a good job in heightening the shadows and offering appropriate coloration, but the focus in these plays, the first two at any rate, is primarily verbal and there is really no need for visual elaboration. Director Neil Pepe has taken each of these stylistically disparate plays and given it its own theatrical character, but the overall effect is flat.

I read somewhere that “Karel” was inspired by the life of Czech film director Karel Reisz, a fact nowhere mentioned in the program but certainly likely, considering Reisz’s life. Martin Moran, who last season was very effective in his one-man play ALL THE RAGE, is the only performer present. His role is simply that of “Actor,” and his job is to narrate the story of a friend, Karel, who, when he was twelve, was sent by his mother to England from Czechoslovakia in the late 1930s to escape the storm clouds gathering over Europe (the mother, we learn, died at Auschwitz). After overcoming his lack of English and other hardships to become very successful, Karel found himself suffering from a horrible rash, covering his entire body except his hands from the wrist down and his head from the neck up. When it grew progressively worse and no physician could cure it, the Actor tells us, he saw a psychiatrist who helped him recognize the ailment’s psychosomatic basis stemming from his experience with another boy, one he met while traveling to England, who ridiculed him for his dependence on his mother. The piece is essentially an anecdote, told by Karel’s friend, and therefore one step removed from the agony of the original experience. Mr. Moran is skillful at holding the stage, and varying his physical and vocal attitudes, but his affect is that of an “actor” performing a story, and I constantly felt the need for a more relaxed and sincere delivery and one less overtly dramatic.

The second piece, “Elzbieta Erased,” is the most memorable. Two actors, A (John Guare) and B (Omar Sangare), stand at podiums as if engaged in a political debate but that premise is soon abandoned as they rove about the stage, and from podium to podium, in carefully staged moves in order to tell the story of a famous Polish stage star, Elzbieta Czyzewska, whose marriage to American journalist David Halberstam, a Jew, made her an outcast and caused serious damage to her career. A projected image of a large painting of her, in which she looks remarkably like Helen Mirren, forms the background much of the time (the original painting hangs in Andre Bishop’s office at Lincoln Center). Her move with Halberstam to America was followed by many obstacles to her success, largely because of her accent, and she experienced various setbacks, some of them quite fascinating, before she died at 72 in 2010.  Guare crossed paths with her several times, and the links between his work and hers are fascinatingly spelled out, as they are with stories involving William Styron and his novel, SOPHIE’S CHOICE, and the actress who played the part of Sophie in the movie of that book, Meryl Streep. 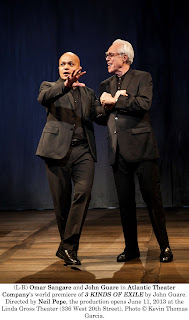 Dressed in formal black, Guare, tall and gaunt, with his high-cheekboned face set off by a crop of pure white hair, makes a creditable debut as a professional actor, although he plays not so much a character as a storyteller. When his own name crops up in the dialogue he speaks it as if it is someone other than himself. He works in well-timed counterpoint with another interesting actor, also dressed in black, the smooth-pated, coffee-colored Omar Sangare, son of a Polish mother and Somali father, who moves with silken grace and speaks in a thick Polish accent that is only occasionally impenetrable. He, too, had a personal connection with Czyzewska, with whom he costarred in a Polish production of Guare’s SIX DEGREES OF SEPARATION.

The final, and weakest, play is “Funiage,” a word that mashes together funeral and marriage. It tells the story of Polish playwright and novelist Witold Gombrowicz (1904-1969), who sailed to Buenos Aires in 1939 as a sort of cultural ambassador to Argentina on the maiden voyage of the cruise ship Chrobry only for war to break out soon after. Gombrowicz (David Pittu) found himself stuck in Argentina for the duration of the war and ended up living there until 1963. What might have been a fascinating exposition of this talented man’s tragic dilemma of being uprooted by history from his national origins is presented in a much too busy, pseudo-Brechtian cabaret style, with a chorus often dressed in bowler hats and tails, an abundance of piano music, and lots of choreographic movement (credited to Christopher Bayes). Despite Pepe’s theatricalist staging, it remains lusterless, repetitive, and dull; Pittu is unable to bring the piece to life, nor is Peter Maloney, as both Gombrowicz’s father and the ship’s captain.

THREE KINDS OF EXILE has moments of excellence but it fails to cohere as a total package. Even having to sit through a play you don’t care for can be a kind of exile, and in that regard I appreciated the feeling of freedom that came over me when I made my way again into the streets of New York.