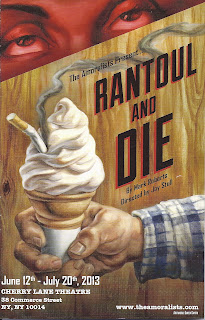 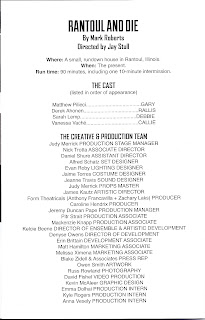 When the lights come up on Mark Roberts’s RANTOUL AND DIE, a scene of apparent violence is underway. We are in the grungiest of refuse-strewn, trailer trash living rooms (designed by Alfred Schatz) and one man, Gary (Matthew Pilieci), is standing behind the ugly, green leather couch holding his friend, Rallis (Derek Ahonen), in a chokehold. The violence, it turns out, is only guy play, but real violence will occur later in this dark-edged comedy being performed in the smaller of the Cherry Lane Theatre’s two venues. Despite hillbilly accents making these working-class stiffs sound like refugees from DELIVERANCE, the play takes place in Rantoul, Illinois, a small city about 110 miles south of Chicago where the Dairy Queen seems to be the chief local attraction.
Matthew Pilieci (in red jacket) and Derek Ahonen.


Gary has saved Rallis after finding him with slit wrists in the blood-soaked tub. Rallis, an unkempt, emotional train wreck, whines endlessly because Debbie (Sarah Lemp), his wife, wants to leave him, and Gary, who is secretly carrying on with her, tries to console him. Then Debbie comes home from her job at the Dairy Queen and goes on a verbal rampage demanding that Rallis sign the divorce papers, excoriating him ruthlessly for all his husbandly shortcomings. At the end of act one, Rallis, about as depressed a sad sack as you’ll ever want to see, does something that leads to his vegetative presence in act two. 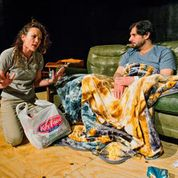 Sarah Lemp and Derek Ahonen.
A fourth character is central to the second act, Callie (Vanessa Vaché), a plump coworker of Debbie’s at the Dairy Queen, who lives with her invalid mother and fourteen cats. Rallis never signed the papers, so Debbie is stuck with him, but Callie, seemingly the most goodhearted of people, is giving all her spare time to nursing Rallis, who is propped up on the couch, wearing a full head cast showing only his nose, eyes, and mouth. This allows things no one would normally say in front of him to be aired, but, because of his occasional, though very slight, head movements and the little we can see of his eyes, the question hovers as to just how much he actually comprehends, if anything. Then, speaking in a barely audible voice, the consistently calm and collected Callie, hoping to show Debbie that even she has made mistakes, launches into one of those long theatrical confessions designed to make your skin crawl by its horrific excesses. We don’t know if Rallis understands a word of it, but he’s stuck with her, and it serves as a suitable conclusion to what might, if it were set somewhere in Alabama or Mississippi, have been a valid entry into the Southern Gothic sweepstakes. 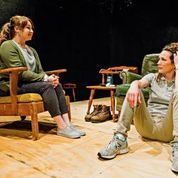 Vanessa Vaché (left) and Sarah Lemp.
Playwright Mark Roberts, a TV sitcom veteran (he’s a producer and writer for “Two and a Half Men”), has a way with eccentric characters and pungent, often profane, language, and there is definitely much that’s quirkily funny in the behavior of these often clueless rubes. The characters are not always consistent, though, sometimes seeming much smarter and more articulate than they should be, and it’s hard to see how Sarah Lemp’s Debbie ever wound up with Rallis (actually, the character is allowed to ask this question herself). RANTOUL AND DIE’s structure is more about a situation than a plot, and that situation is essentially a set up for the display of crackpot characterizations and grittily offbeat conversation.


Director Jay Stull moves the action along at a steady clip and he gets fully energized performances from his four-actor company, each of whom brings his or her character to colorful life. But for all its would-be over-the-top, subversive humor, I found this two-act, 100- minute piece (not 90, as advertised) a bit longer than it had to be, and not as funny as it should have been. Considering its author’s TV background, perhaps a laugh track would have helped.
Posted by Samuel L. Leiter at 12:15 PM