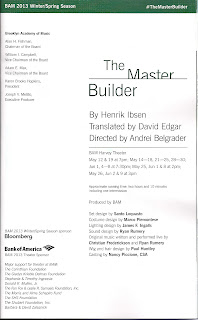 
Some plays are so embedded in the literary-dramatic canon that they continue being revived despite the difficulties of keeping modern audiences interested in them. Often this is because some director feels he has a way into the play that will make it relevant or exciting, or because a star actor is enthusiastic about a chance to do a serious classic that he or she feels represents a worthwhile challenge to their talents. One such play is Henrik Ibsen’s THE MASTER BUILDER, now being presented in David Edgar’s translation at BAM’s Harvey Theatre under the direction of the highly respected Andrei Belgrader, with John Turturro in the title role of Halvard Solness. 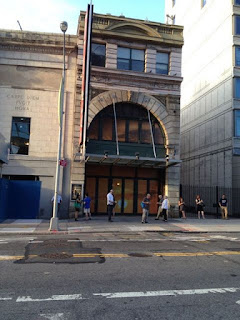 The play, while showing its age as a representation of that period in Ibsen’s career when realism began flirting ever more friskily with symbolism, remains interesting for the strong markers it displays of its autobiographical inspiration. However, it requires, at least in its leading character, an actor of great depth, humanity, charm, sex appeal, and emotional range. In John Turturro it gets an actor of intelligence and power, but also one lacking the other qualities, with the result that Solness comes off as a selfish, self-aggrandizing, and pompous ass whose presumed magnetism for women is a puzzle it would take Emo Rubik to figure out. Turturro’s performance is filled with grand but hollow gestures, making me think of the day that great hams of the past, like Walter Hampden, trod the same stage back in this venerable venue’s early days, when it was known as the Majestic.


There are other things I wrestled with as well. Recent major productions have eschewed the realistic interiors associated with the Ibsen of yesteryear and gone for more metaphoric, expressionistic sets, an approach taken here by Santo Loquasto. Solness’s home is depicted as a framework structure, with a huge wall of wood at the rear of the stage, and with all of it on a turntable so that different views of the framework can be seen when new parts of the house come into view. But the framework and back wall are slanted, as though they are sinking into the earth at one corner, perhaps as a sign that Solness himself, so reluctant to share his position with newcomers to his profession, is slipping and unstable. Again, as in the recent Yale Rep production, Solness’s fatal climb up the ladder at the end to place a wreath on the steeple (also slanted) he has completed is performed as the audience watches, but his fall is awkwardly presented and the play ends with a  whimper, not a bang.


Hilde Wangel, the spirit of youth that literally comes knocking on Solness’s door, is played by the attractive Wrenn Schmidt, who failed to impress me in last season’s KATIE ROCHE, but is far more animated and appealing here. Unfortunately, Belgrader’s direction has her play the character more like a trollop than a troll and her costuming suggests the underwear of the period rather than the travel wear of a 23-year-old free spirit. I still recall the unearthly quality Lois Smith brought to the role in a public television broadcast more than half a century ago, but in the current version, Hilde comes in more decisively on the earthly/earthy side.


More positively, the fascinatingly high cheekboned Katherine Borowitz (married to Turturro in real life) puts in a delicately limned performance as Solness’s wife, Aline, and the background music by Ryan Rumery--performed live by him and Christian Frederickson--provides just the right tone of airy romanticism required.


Perhaps with a master actor leading the way, THE MASTER BUILDER might have been worth the trouble. For now, it remains a musty period piece that, even with the usual accouterments of contemporary design, music, and staging, keeps sinking into the earth below.
Posted by Samuel L. Leiter at 9:35 AM