42. Review of CUFF ME: THE FIFTY SHADES OF GREY UNAUTHORIZED MUSICAL PARODY!

42. CUFF ME: THE FIFTY SHADES OF GREY UNAUTHORIZED MUSICAL PARODY! 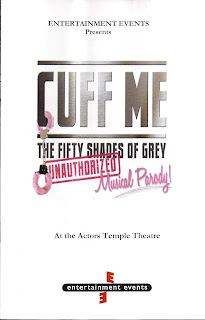 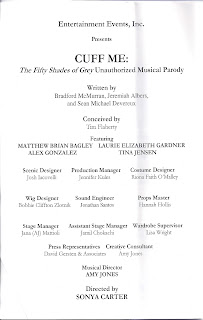 In CUFF ME: THE FIFTY SHADES OF GREY UNAUTHORIZED MUSICAL PARODY! one of the characters says something to the effect of “It’s weird doing sex acts in a synagogue.” That’s because this shoddy parody of a publishing phenomenon that even the characters in the show demean (“the writing sucks” is one example; another calls the book “first-class smut”) is being performed at the Actors Temple Theatre on W. 47th Street. But judging from an audience that seemed to be made up of over 90 per cent squealing and giggling young women (with a few cougars thrown in for good measure), even with me and a male friend present, finding a minion (ten men) to hold services would have been highly problematic. Perhaps this is because, as the show says of FIFTY SHADES OF GREY, the book by British writer E.L. James on which it’s based, it’s “the greatest piece of literature in the women’s masturbation movement.”


Despite a couple of performers who might do respectable work in more conventional fare, this show (conceived by Tim Flaherty) is written, directed (by Sonya Carter), and performed in a blatantly hit ‘em over the head style of exaggerated mugging and shouting. The book and lyrics (by Bradford McMurran, Jeremiah Albers, and Sean Michael Devereux) seem determined to find the lowest common denominator, so what might have served as fodder for an amusingly dirty satire of an erotic book that every female on the planet seems to have read comes off as tastelessness personified. Interestingly, while the buff actors playing Christian (Matthew Brian Bagley), the leading man, and  Ana (Laurie Elizabeth Gardner), the leading lady, get down to their underwear, there is no actual nudity (apart from a scene in which Christian turns around to reveal that the buttocks area on his trousers has been removed to expose his nether cheeks). A brief sequence done in projected shadows allows for a silhouetted man to demonstrate his cartoonish tumescence, but mostly the sexuality displayed is a matter of mindlessly continuous bumps and grinds and mimed sexual positions. All right, already, I wanted to shout after bump and grind 1,000. WE GET IT!!


The show’s premise is that, while a couple of women are in a beauty parlor, they and two beauticians begin to talk about FIFTY SHADES OF GREY. One woman (Tina Jensen) never heard of it, so the other woman begins to explain it. I won’t bother with any more plot description so let it suffice to say that the story is about the sexually innocent Ana’s sexual awakening via the S&M proclivities of a handsome, wealthy businessman named Christian. Four actors (the second male is Alex Gonzalez, who also undertakes female roles) play the multiple roles, and there are numerous costume and wig changes.


The set, which uses several movable panels to create different locales, is cheap and tacky looking, the most prominent effect being three walls covered with dildos, paddles, whips, and other sexual implements (including, for hilarity’s sake—NOT—a rubber chicken and a plastic flamingo). This is a musical, but without original music, so new lyrics are set to familiar tunes. Of those I recognized (which don’t include the hip-hop numbers), there are “Big Spender” (from SWEET CHARITY), “If I Were a Rich Man” (FIDDLER ON THE ROOF,” “Like a Virgin” (Madonna), “Baby It’s Cold Outside,” and so on. The lyrics are radically altered to reflect the show’s tawdry humor, so Madonna’s anthem, for example, becomes “I’m a Virgin.”


Everything is miked and amplified to very high decibel levels, and the actors, especially the ditzy Ana, often scream their lines as if that somehow might makes them funnier. There are substantial chunks of choreography (the finale, done in Bollywood style, is actually pretty good), sometimes with strobes flashing through overdone smoke effects. Everyone seems to have graduated from Overacting University, which, naturally, has no courses labeled Subtlety 101. Almost all dialogue is directed straight to the audience, as in old-time vaudeville routines. The simpleminded dialogue is riddled with such tasteful zingers as, “When I reach the good parts I touch myself.” Or, “I wanted to finger your butthole with mayonnaise.” The characters are caricatures of caricatures, and Ana is so dumb she doesn't know the difference between ID (identity) and id (the Freudian term).
Most members of the audience seemed to be having a grand old time. And even the Ukranian-born manager--a guy who trained as a classical trumpet player--at the Nissan dealership where I recently got a new car--recommended the show when he learned of my theatre interests. I don't know if he read the book, though. I myself have not, so my response does not accurately reflect the degree to which the show parodies the book. Perhaps you have to read it to appreciate what’s on stage.  But if the book is as bad as even its parody often announces, then I’d be surprised if the show isn’t even worse.
Posted by Samuel L. Leiter at 9:28 AM