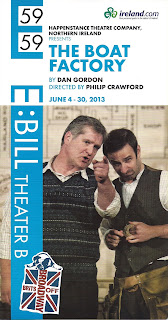 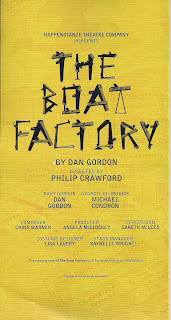 Dan Gordon, playwright and costar of THE BOAT FACTORY, now playing at 59E59 as part of the Brits Off Broadway season, grew up in East Belfast, home to world-renowned factories that produced thousands of world-class ships. The Titanic was the most famous of these fabulous creations, built by the Harland and Wolff factory, where Gordon’s dad (or “da,” as the play would have it), Davy, worked, starting in 1947 and ending when he succumbed many years later to mesothelioma. THE BOAT FACTORY is an elegy to the days of the shipbuilding factories, which gradually died out when jet passenger planes replaced them in the 1960s as a means of global travel. It is also a reminiscence of working-class life in postwar Belfast, a largely Protestant city in Northern Ireland where Catholics were in the minority, but, despite 200 years of religious tension, worked in the shipyards largely without friction next to their much more numerous Protestant coworkers. 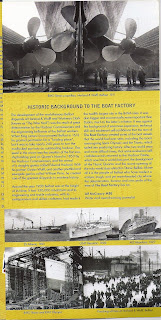 Gordon’s intimate play, a two-hander in which he and Michael Condron play multiple roles, was originally staged  by the Happenstance Theatre Company, Northern Ireland. It combines comedy with poignancy in an unconventionally structured work, reminiscent of story theatre, that a friend who saw the play with me commended as being as carefully crafted as the work of the shipwrights who created those great behemoths of yore. Gordon mingles naturalistic prose with poetic passages, shifting gears from scenes that dramatize his da’s family life, his going to work as an indentured laborer, and his close friendship with Wee Geordie (Condron), to moments that recite in telegraphese the history of Belfast shipbuilding and that describe the tools, routines, and dangers of working in the yards. Gordon writes in his program notes about the Boat Factory's place in his life, and its silence in later years: "It is a heritage and a history that has all but disappeared--and with it, the skills, the memories, and the men who made it great. I want to remember them--for my father was one of them."


Gordon, a husky, gray-haired man in a sleeveless wool sweater, and Condron, a more slightly built, vest-wearing, younger fellow with thinning dark hair, make a perfect duo who use their thick Irish accents (Condron is actually a native Canadian) to capture multiple colorful characters, like the granda who, every time he farted, blamed his dog; or an effeminate shoe salesman; or a beaky-nosed clerk; or an overweight office girl; or an official who resembled Oliver Hardy and actually was named Hardy, and so on. There is marvelous byplay when each in turn, doing rapid changes of a bowler hat, plays a gruff-voiced foreman. Condron, performing his main role of Geordie, a carpenter with a gimpy leg caused by a bout with polio, has a running gag where he lopes around like a movie cowpoke and asks Davy, “John Wayne or Gary Cooper?” These two highly disciplined artists display beautifully coordinated timing, movement, gestures, and facial expressions, often highlighted by wonderfully integrated sound effects. Despite the stylization of the staging (kudos to director Philip Crawford) and writing, and their speedy shifts from role to role, they always remain completely focused and totally believable, even when being exaggeratedly cartoonish. Their stage is a simple one of a backdrop depicting the ground plan of the shipyard and harbor, with red metal scaffolding up right and up left that they use to excellent advantage, especially when climbing up to a tower, the “crow’s nest,” overlooking the river alongside the shipyard.