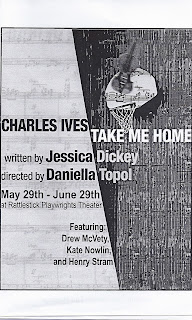 There is an unusual three-actor ensemble on view at the Rattlestick Theatre on Waverly Place in Greenwich Village. The play is CHARLES IVES TAKE ME HOME by Jessica Dickey, and the actors are Kate Nowlin, Henry Stram, and Drew McVety. In this 75-minute, intermissionless work, well directed by Daniella Topol, Ms. Nowlin is completely convincing as Laura Starr, a young woman we see obsessed from childhood on with basketball. An attractively large-boned and athletic looking blonde, usually with a sweat band in her hair, she dribbles a basketball with all the authority of someone who has been doing so for a very long time, even palming the ball at one point. Mr. Stram does a convincing job of playing the modernist composer Charles Ives, and carries off not only a charming impersonation of the character but plays a mean piano as well. And Mr. McVety does a convincing job as John Starr, Laura’s dad, a classical violinist; he, too, plays his instrument with the ease and fluency of a professional. Finding three such perfect fits for these hard-to-cast roles must have been very difficult, but the feat has been accomplished and the result is definitely worth seeing, even if the play falls a bit short of the actors’ accomplishments. 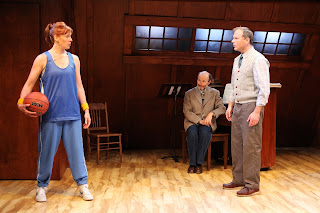 Kate Nowlin, left; Henry Stram, center; Drew McVety, right. Photo: Sandra Coudert
Andromache Chalfant’s set gives us a polished wood floor surrounded by a paneled room with a row of windows across a recessed upstage wall with a piano in front of it; it serves both as a musical practice room, a gym, and any nonspecific area the action requires.  The play opens with an informal, somewhat jokey introductory speech delivered to the audience by the amusingly professorial Charles Ives, which reminds us to turn off our “technological devices” and to thank our neighbors for any distractions they may cause, such as by their elbows or large bags. The play then bleeds into 1987, with Laura giving her high school girls’ basketball team a priceless halftime pep talk after they fall behind in the first half. Her aggressive but funny diatribe ranges from a reference to the insertion of tampons to an exegesis on basketball knees to a putdown of one girl for dribbling like “a retard giraffe.” From there we go back and forth in time as the play establishes the life arc of Laura, who has thought of nothing else but basketball since early childhood, and that of her father, as preoccupied with his violin as Laura is with her basketball, always auditioning for some major philharmonic orchestra but never quite reaching his goal. He and his wife, Laura’s mother, are divorced, so the focus is on the father-daughter relationship. Despite his daughter’s obvious athletic abilities and determination, John thinks little of her aspirations, and when she applies for a college athletics program, he dismisses her out of hand (“not on my dime”) as having chosen something totally impractical, even though she has won a full scholarship and her schooling will cost him nothing. Through it all, Charles Ives, who once stood in for John’s teacher at Julliard and even gave him a private session, a high point of John’s life, serves both as himself and a sort of interlocutor, offering philosophical musings on music as an art, and on its relationship to sports. Laura emphasizes to her father, who is always scrambling to make a living from his playing, that Ives made his in the insurance business, but her suggestion that John also find another way to earn his money falls on deaf ears.  And John, even though his own father was a sports fan, is absolutely tone deaf to the value of athletic competition; in fact, his increasingly obtuse attitude toward his daughter’s dreams and achievements is the play’s least believable element. He only comes to realize how wrong he’s been when it's too late. There are many references to father-child relationships in the play, including those of each of the characters, most of it pertinent but likewise familiar.


What the play does best is to integrate John and Laura’s passions so that we see how sports, but especially basketball, and music share many things in common, such as rules, repetition, and timing (interestingly, the basketball buzzer sounds very much like the factory buzzer in REASONS TO BE HAPPY). Ives observes that the essence of life lies in the body, the spirit, and time. This is the kind of play where the lines always have a double meaning, as in Laura’s repeated expostulation to her team that they can only succeed if they “dive for the ball,” a mantra clearly meant to be taken on a more than literal level.


Daughter and father teach each other the principal terminology of basketball and music, and there are fascinating sequences where Laura’s dribbling is performed in counterpoint to John’s violin playing. There is also a delightful scene in which Laura, as a child, begs her father to pay for her basketball camp by intoning her request in the rhythms of Beethoven’s 5th.  Ms. Dickey’s language, couched in speeches made directly to the audience as well as in heightened dialogue, is poetically pungent, and dotted with effective zingers, some of them dependent on mildly rude language.


With its well-expressed theme and its expert performances, CHARLES IVES TAKE ME HOME proves a welcome diversion. The friend accompanying me has a basketball-playing daughter who was a college star and who closely parallels the one in the play, and he found her experiences completely authentic, although his own attitude toward his daughter’s activities was totally supportive. This made him, too, question the veracity of John Starr’s behavior. Still, he pointed out, he has known fathers who are similarly blind to the worth of their children’s athletic fixations, so such people surely do exist. But, for me, John remains a straw man written to create a dramatic conflict, and I found it impossible to get past his stubborn inability to acknowledge Laura’s dreams. This is one of the only fouls in a fast moving play that shows what it takes to dive for the ball.
Posted by Samuel L. Leiter at 8:17 PM