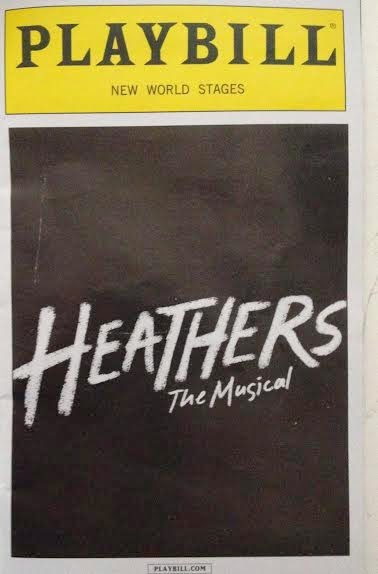 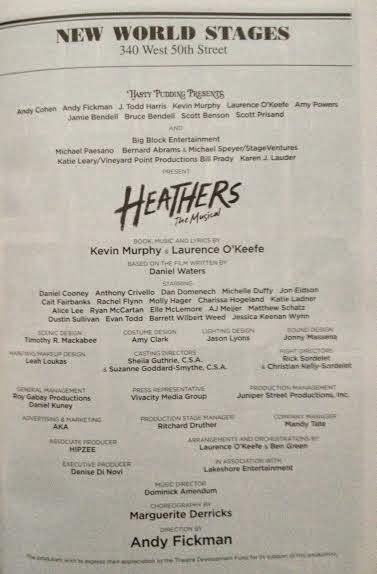 If you live in Littleton, Colorado (home of Columbine High School), or Newtown, Connecticut (home of Sandy Hook Elementary School), boy, do I have a show for you! It’s called HEATHERS: THE MUSICAL and it’s all about this high school girl named Veronica who falls in love with J.D., a rebellious student in a long black coat, who’s so pissed at the world he thinks nothing of taking his dad’s Luger and blasting his fellow students, then placing a bomb in the school to finish all the other “assholes” off at once. But even without a high school boy on a serial killing rampage, the show has students practically waiting on line to commit suicide. And there’s also a girl who’s tricked into drinking drain cleaner. 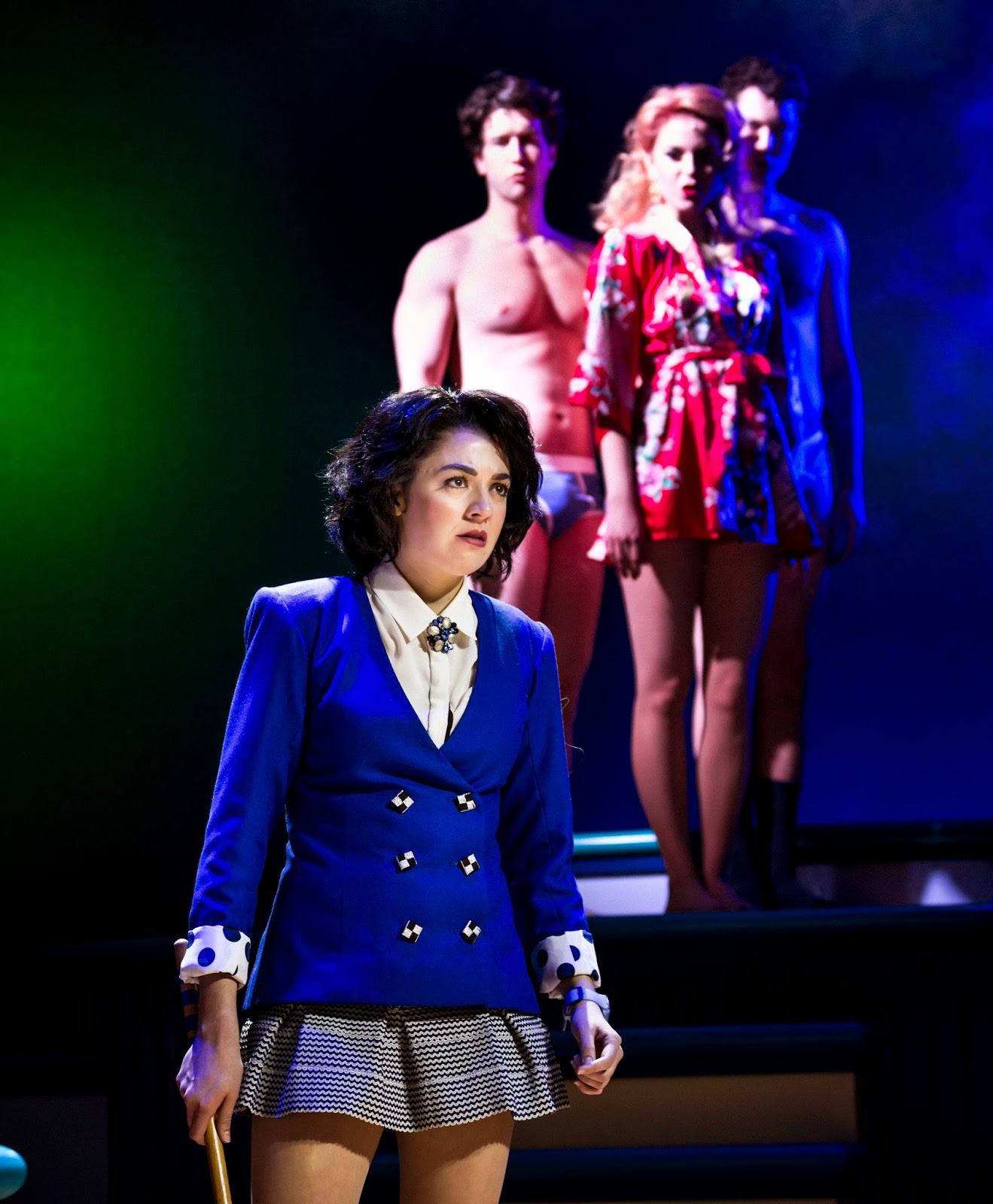 
Sounds fun, doesn’t it? That seems to have been the rip-roaring reaction of the audience attending the night I went, especially since the show is based on HEATHERS, a 1989 movie by Daniel Waters. This film, which introduced Wynona Ryder as Veronica and costarred Christian Slater as the evil boyfriend, has become something of a cult classic, with fans memorizing its juicier lines and waiting breathlessly for the show to repeat them. When someone says, “Well, fuck me gently with a chain saw,” or, “What? Did you have a brain tumor for breakfast?” you’d think the god of comedy itself was laughing joyfully, telling herself "how very" the show is.


Front: Barrett Wilbert Weed; rear, from left: Elle McLemore, Jessica Keenan Wynn, Alice Lee. Photo: Chad Batka.
This isn’t to say that HEATHERS: THE MUSICAL, at New World Stages, is badly done. It’s actually a highly professional show with lively (if inconsistently amusing) book, music, and lyrics by Kevin Murphy and Laurence O’Keefe, energetic (if uneven) direction by Andy Fickman, and amusing (if repetitive) choreography by Marguerite Derricks.  Timothy R. Mackabee has created a colorful (if bland) unit set that serves for multiple locales, Jason Lyons has contributed inventive (if predictable) lighting, and Amy Clark has come up with vivid (if, in the case of J.D.'s coat, questionable) re-imaginings of 1989 high school clothing, down to the girls' scrunchies. But the show itself, for all its energy, slickness, and solid singing, is a tasteless and uncomfortable stew mingling homophobia, teenage sexual angst, eating disorders, school bullying, parental dysfunction, and educational mismanagement in a would-be satire of high school life that makes GREASE look like GYPSY by comparison.
At least, the music in GREASE plays off the familiar styles and sounds of the period it's spoofing; the music in HEATHERS: THE MUSICAL is generic with nary a whiff of the sounds of Michael Jackson, Madonna, Bon Jovi, Bruce Springsteen, or any of the top artists associated with the era. Some of the songs are certainly listenable, like “Kindergarten,” the lament sung late in Act Two by Martha (Katie Ladner), the fat girl everyone picks on, or “Seventeen,” about how hard it is to be that age, sung by Veronica (Barrett Wilbert Reed) and J.D. (Ryan McCartan, who, my companion rightly noted, slightly resembles a young, if less charismatic, Christopher Walken). But we also have to listen to “Blue,” a song about, let us say, testicular frustration, which has a reprise accusing Veronica of fellating two boys at once (the cocky lyric goes: “Sword-fighting in her mouth”).  There’s also “My Dead Gay Son,” in which two dads (Anthony Crivello and Daniel Cooney) come to terms with the revelation (false, by the way) that that their slain boys were homosexual, while realizing that they themselves are as well. Here’s where a “Hand Jive” would have come in handy.


The show faithfully follows the plot of the movie, which is itself an exaggerated, over-the-top depiction of high school life, and deals with a pretty but unpopular girl who uses her forgery skills to raise her popularity by joining the three-member mean girl clique known as the Heathers. There's  Heather Chandler (Jessica Keenan Wynn), the leader (who downs the drain cleaner); Heather McNamara (Elle McLemore), who later reveals suicidal thoughts; and Heather Duke (Alice Lee), the group bulimic. The familiar tropes of high school life unfold, including the unwanted incursions of a pair of thickheaded football jocks, Ram Sweeney (John Eidson) and Kurt Kelly (Evan Todd), who are responsible for much of the raunchier parts, and there’s the aforementioned fat girl, Martha Dunnstock, cruelly nicknamed Martha Dumptruck by her tormentors. HEATHERS: THE MUSICAL is “Glee” on slurpies (there’s actually a slurpie song advocating a drug-free way to tune out, “Freeze Your Brain”). 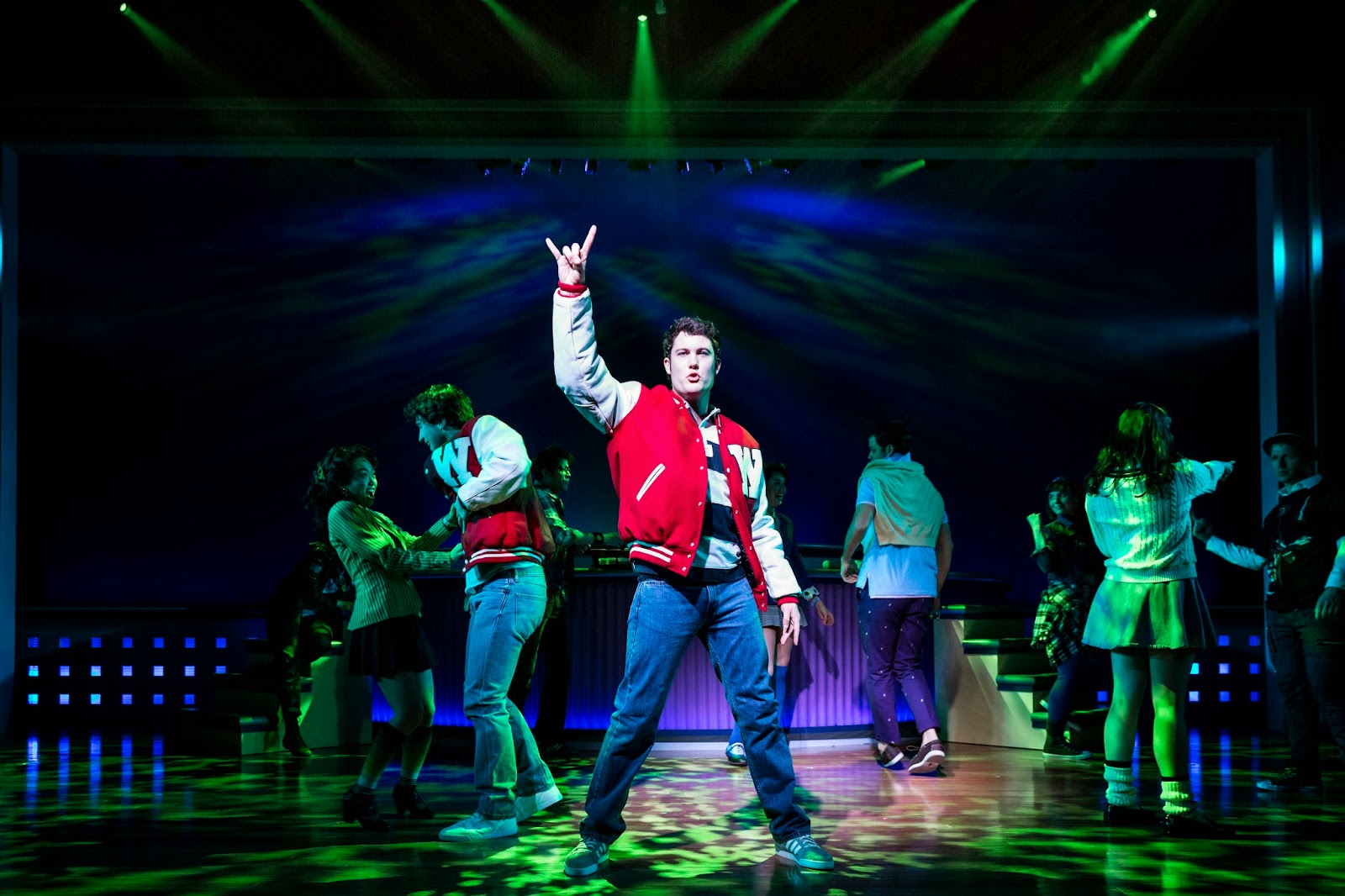 Jon Eidson. Photo: Chad Batka.
﻿
Is there a large enough cohort of HEATHERS fans out there to support this subversive view of high school life? Perhaps. But for me, it would need a better score, more appealing characters, and funnier jokes to help overcome the distaste produced by its toxic subject matter, satirical as its intent may be. Too often, when thinking about the show, I had the taste of drain cleaner in my mouth.
Posted by Samuel L. Leiter at 8:24 PM