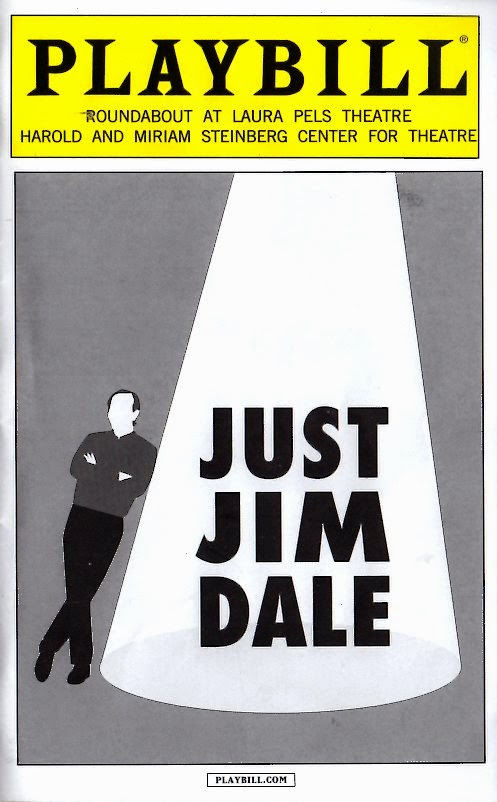 The title of this often entertaining, if uneven, show, at the Laura Pels Theatre, starring the inimitable British (but now American citizen) entertainer Jim Dale, is not quite accurate, since he’s accompanied throughout by the jovial presence of the nimble-fingered pianist Mark York. Mr. York, sitting upstage right at a baby grand, laughs and smiles at Mr. Dale’s cavorting, mirroring the delight expressed throughout by the audience, which Mr. Dale often takes directly into his embrace as part of his act. Even at 78, this indefatigable showman from Rothwell, Northhamtonshire, remains lithe, limber, and eminently likable; in JUST JIM DALE, which he also wrote, he takes great pleasure in rambling through the highlights of his very diverse career as a standup comic in British music halls (starting when he was a mere 17), a successful rock and roll writer and performer, a Shakespearean clown, a Broadway star, an Oscar-nominated lyricist, an audio book actor, and so on. 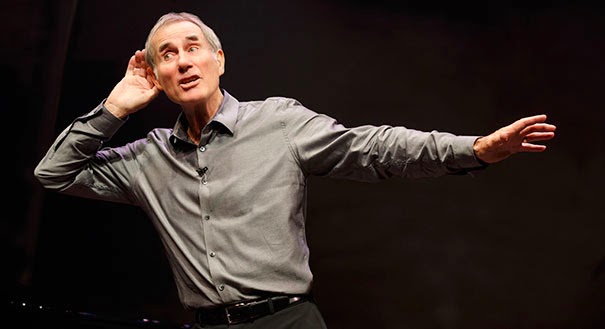 The highly selective story of Mr. Dale’s life on stage and screen is woven together with songs, dances, and funny anecdotes, the kind of stuff most show business addicts will sop up avidly, even if not all of it is first rate stuff. Aside from some mildly shaded moments in his early life, such as when he went to work in a dismal shoe factory and realized that this was not to be the life he’d lead, there’s nothing at all depressing in his story, which is one of turning almost every opportunity to his advantage, even when he might easily have failed. He transforms the tales of his early travails into comic gold, using an extensive arsenal of amusing facial expressions, gestures, and body movements. Mr. Dale’s six years of dance training as a boy, and his perpetually lanky frame (he’s as trim as Astaire), help him sustain visual interest in his story, even though, apart from Mr. York in the upstage shadows, he’s all alone on a set designed by Anna Louizos to keep the image of a British music hall—the single greatest influence on his work—perpetually before us. That set consists of a false proscenium outlined in small light bulbs and a backdrop on which there’s a blowup photo of a traditional music hall stage, as seen from the rear of the house. When appropriate, wonderful photos of Mr. Dale as a young entertainer are projected on this backdrop, as are images of the programs on which he appeared. Mr. Dale's agenda is nostalgia, which he mostly succeeds at conjuring for us.


The star, born Jim Smith, which he changed when a contract accidentally listed him as Jim Dale (Dale was his agent’s name), doesn’t bore his audience with every step in his career, choosing the highlights carefully, and even moving around with some chronological freedom to keep things interesting. If you're familiar with his career, you'll undoubtedly miss--and possibly regret the absence of--a lot he chooses to omit, such as his work in the CARRY ON films series, or his television activity. When opportunity arises, he inserts extraneous, but rather risible material, such as a mildly off-color, true story his friend Frank Langella told him about a patient in a hospital with a question seemingly about the patient's nether regions, or a brilliant riff on the many familiar expressions in English that derive from Shakespeare and that people always say without knowing they’re quoting the Bard.

When I first read this Shakespearean section in the text, I wondered what it was doing in the show, but when I heard Mr. Dale spin it out in his perfectly timed, rhythmically accented presentation, I realized how precisely it fit into the proceedings, which are really designed more to demonstrate the actor’s noteworthy versatility than to elucidate his life story. His verbal dexterity is also revealed in several of the songs he sings, especially the “Museum Song” from the Cy Coleman, Michael Stewart musical BARNUM, which was Mr. Dale’s first big Broadway hit. To show what’s involved in this tongue-twisting routine, he first performs it slowly, so all its images can be understood; he then shifts rapidly into the actual tempo, which requires he sing the words at mach speed.

Jim Dale doesn’t have a great voice, by any means, and his singing is best when it’s in the manner of speak-singing to a rhythmically difficult song that doesn’t overly challenge his vocal range. Still, even when he sings a standard tune that others might make more of musically, he manages to capture the subtextual nuances by the clever physical ways he diverts attention to meaning away from melody. In a sense, he’s like a magician, who gets you to look one way so that he can trick you in the other.

So, what are some of the things I haven’t mentioned you’ll encounter during this hour and 40 minute intermissionless show? You’ll hear Mr. Dale singing Leslie Bricusse and Anthony Newley’s “I Gotta Be Me”; “The Lambeth Walk” (from ME AND MY GIRL, in which he appeared); “Dick-A-Dum-Dum,” a marvelous nonsense song he wrote and that he disingenuously mocks for its silliness; “Georgy Girl,” the hit theme song for the Lynn Redgrave movie of that name, for which he wrote the lyrics; “There’s a Sucker Born Every Minute,” from BARNUM; Coleman and Stewart’s haunting “The Colors of My Life”; and Irving Berlin’s “Let Me Sing and I’m Happy.” There’s also some material about his appearance in  Moliere's SCAPINO; the climactic speech from Noël Coward’s FUMED OAK, which turned Mr. Dale on to dramatic acting; the opening speech in Peter Nichols's JOE EGG, in which he has the audience placing its hands on its head like kids being punished in school; and a mildly amusing sequence describing Mr. Dale’s clumsy introduction to recording audio books, when he was hired to do the HARRY POTTER series.

None of this material gives us much insight into the performer's personal life, his politics, or anything serious he may have experienced or thought about outside of show biz; it's mostly a somewhat scattershot joy ride through parts of his career that allow him to fill some entertaining time on stage demonstrating the skills he wants to show off. Since the still boyish Mr. Dale is such a pleasant person to have around, most audiences will be content to take the show for what it is.

Having seen the 77-year-old Linda Lavin the other night in TOO MUCH SUN, where, at least according to conventional standards, she looks and acts many years younger than she is; the  still spry smooth-skinned, 95-year-old Marge Champion presenting an award at the Drama Desk Awards on Sunday evening; and the 78-year-old Jim Dale singing, moving, and telling jokes like someone in the prime of life, I wonder whether Ponce de Leon might not have found the Fountain of Youth merely by walking into the closest theatre.
Posted by Samuel L. Leiter at 7:27 PM