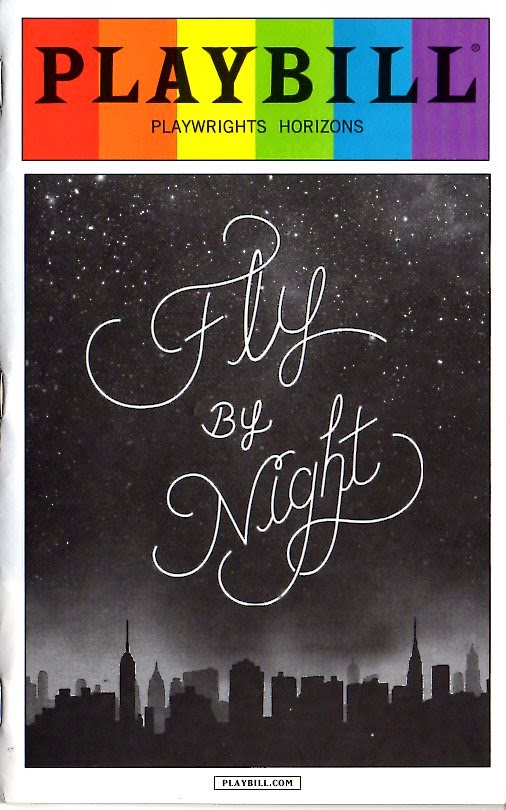 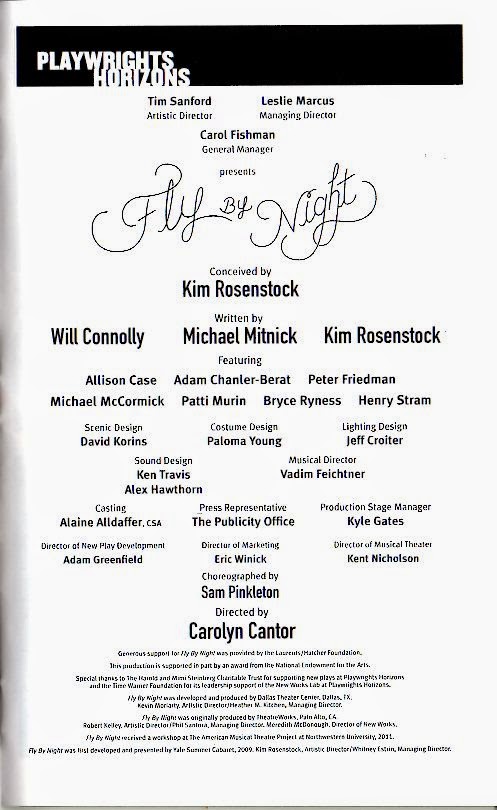 FLY BY NIGHT, a perfectly charming new musical parable about the 1965 blackout, briskly directed by Carolyn Cantor, is now playing at Playwrights Horizons. The major problem with the show, which has been in development for half a decade, is that it’s a 90-minute musical buried in a two and a half hour production that doesn’t know when to turn the power off. When it finally seems to be on the verge of ending, it keeps on going, like the Energizer Bunny. By then the good will it’s built up has dissipated and the lyrics to THE LION KING’S “Endless Night” circle through your brain, although, unlike in that song, there’s no absence of starlight overhead, what with a canopy of stars overhead suggesting what happened when the lights went out. Too bad the blackout that brings the stars out to play comes so late in the show.
Henry Stram, Allison Case. Photo: Joan Marcus.


FLY BY NIGHT, conceived by Kim Rosenstock, and written and composed by Ms. Rosenstock, Will Connolly, and Michael Mitnick, all MFA alums of Yale, where the piece began, is a whimsical, small-scale, fable-musical with metaphysical pretensions about time, love, life’s choices, and destiny centering on a  pleasantly nerdy, would-be songwriter from Brooklyn named Harold McClam (Adam Chanler-Berat). Harold, who affects an interest in marine biology, works as a sandwich maker for a boss named Crabble (Michael McCormick), an air traffic controller during World War II. Harold, who almost always has his late mother’s guitar strapped across his back, and is struggling both to become a singer and write an obviously metaphorical song about a sea turtle (which turns out to really rock), falls for a blonde clothing salesgirl, Daphne (Patti Murin); she has come to New York from small town South Dakota to be a star on Broadway. Her brunette sister, Miriam (Allison Case), who’s fascinated by astronomy, would have been perfectly content to stay at home, working as a diner waitress, but is induced by Daphne to come to New York with her. Meanwhile, Harold’s dad, Mr. McClam (Peter Friedman), has sunk into a depression following the death of his wife in November 1964, and survives only because of his constant immersion in an album of “La Traviata,” to whose joys Cecily, his late wife, introduced him, a story he is always trying to tell but that no one wants to hear.


A young producer-director-playwright named Joey Storms (Bryce Ryness) meets Daphne at an audition and thinks she’s perfect for his new show. Daphne and Harold have set the date for their wedding but her incessant rehearsal schedule, with the show scheduled to open on November 9, 1965, puts a crimp in their plans. Meanwhile, further complications arrive in the person of Miriam, now working at the same Brooklyn café where Harold’s dad—from whom, in his self-absorbed navel gazing, he’s grown apart—eats breakfast (Miriam’s thrilled that they serve breakfast all day long). Miriam's fate is predicted in three riddling clues provided by an old gypsy fortune teller. The clues all lead to her falling for Harold, and vice versa, despite his relationship with Daphne. The stories’ disparate threads come together in amusing if predictably sentimental fashion on that fateful night in November, when the lights go out all over the Northwest and people find, if only briefly, their shared sense of connection with others (a major theme of the show, of course). Tragedy also strikes that night, giving the show a bittersweet ending. 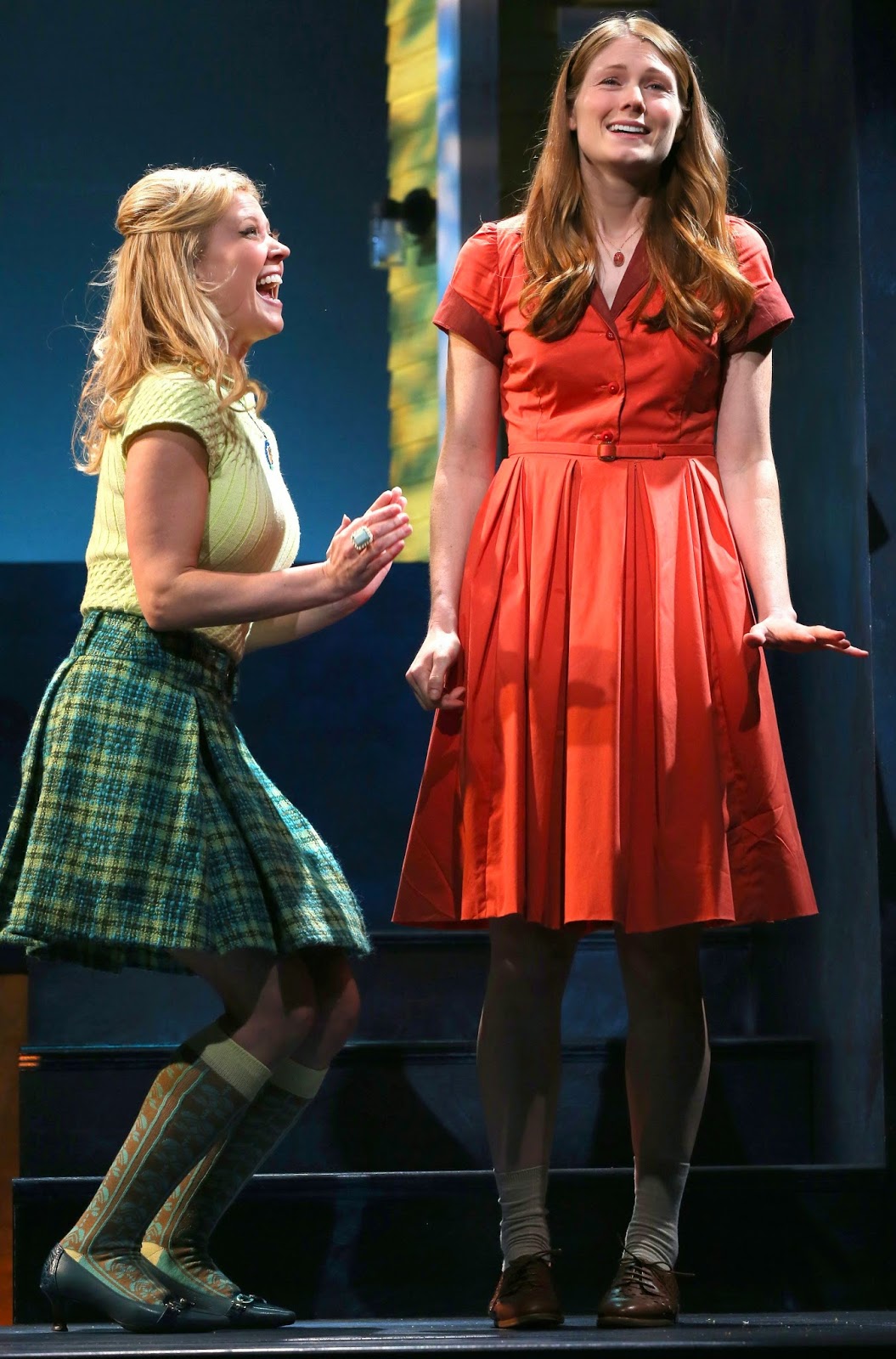 Patti Murin, Allison Case. Photo: Joan Marcus.
﻿
All of this is told to us as it is happening by an omniscient FANTASTICKS-like narrator (Henry Stram), speaking in “he does this,” “she does that” sentences, who moves the action backward and forward over the course of a year, ruminates on its philosophical meanings, and plays secondary roles, such as the mother of Daphne and Miriam and the fortune teller. Mr. Stram keeps the same vested business suit on for all his characters, and uses only broad, caricaturish voices and movements to separate them.


The characters are mostly playful stereotypes, the acting is agreeable if sometimes pushy (I especially liked Allison Case and Peter Friedman), there are mostly bland chuckles but also a few solid laughs, the spirit is generally peppy and upbeat, and the rock ‘n role-accented music combines some truly catchy tunes  (like "I Trust Stars") with some more readily disposable ones (like one about making sandwiches, with its incessant refrain, "Mayonnaise, meat, cheese, and lettuce"). When they aren't forcing the charm, the leading players have enough innate personal appeal to keep you attentive, at least for the first 90 minutes. Which reminds me of the first question the gypsy asks Miriam to ponder: "What does it look like when time stops?" to which I can now answer, "The second act of FLY BY NIGHT."


During the 2012-2013 season, it seemed that every other show featured a bathtub. Last season, 2013-2014, was notable for the number of shows with star-filled skies. FLY BY NIGHT has both a bathtub and a gorgeous sky (created by Mr. Croiter), its stars illuminating not only the rear and sides of the stage but, as mentioned before, the ceiling overhead. It’s too early to tell what the rest of the season will present, but the sandwich-making scenes in this show are reminiscent of those in the recently opened AMERICAN HERO, and it could be that sandwich making will be the de rigueur theatrical element of 2014-2015. To which I can only say, I’ll have a BLT, heavy on the mayo.

Note: Playwrights Horizons provides assisted listening devices to those who need them.
Posted by Samuel L. Leiter at 2:07 PM