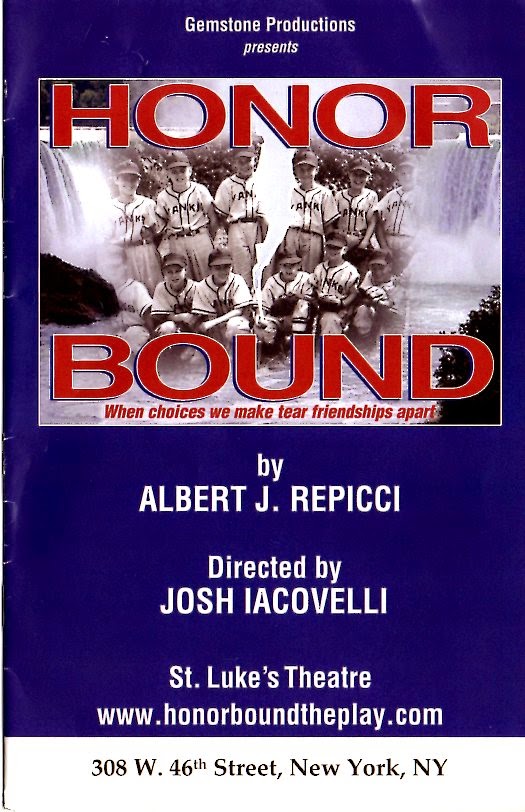 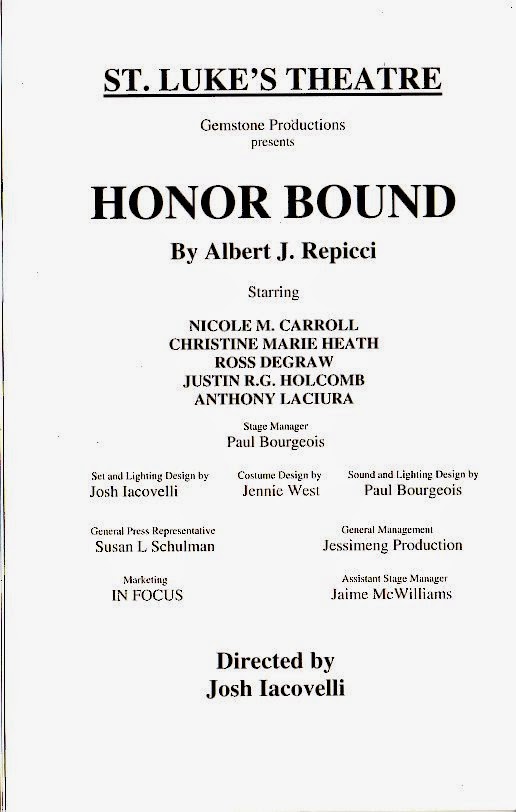 At the heart of HONOR BOUND, an earnest yet awkwardly constructed, talky, and often implausible play by Albert J. Repicci, is the tale of a deep friendship shattered by decisions made during the Viet Nam War regarding whether or not to evade the draft. The story of draft evasion may no longer be very fresh or, in our current draft-free society, seem particularly relevant, but it does bear historical import, forcing us to remember how sharply the war divided the nation. The story is encased in a more universal body that examines the lengths to which a journalist will go to pursue a story for purely personal reasons. Mr. Repicci’s play, however, muddles both the heart and body by an overly episodic structure that bloats the narrative with digressive material, and that too frequently lapses into cliché, contrivance, and clumsiness. 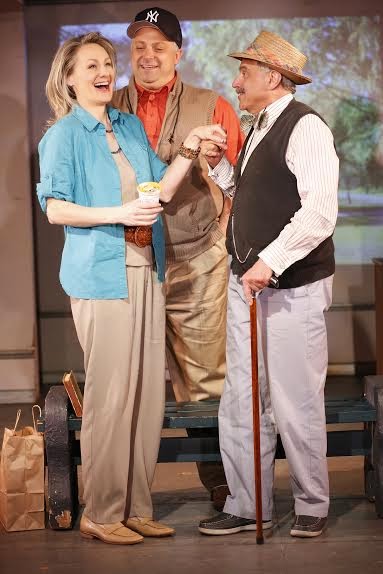 
For one thing, the tiny stage at St. Luke’s Theatre, which currently houses multiple shows that each receive a few performances a week (HONOR BOUND plays only on Fridays), is simply inadequate to the demands of a two-act, two-hour play requiring at least five locales that appear in 14 scenes. The stage crew is kept inordinately busy shifting Josh Iacovelli’s rolling walls to create a newspaper office in Glenville, Connecticut, an upscale home, a suburban park, a bar, and a Greenwich Village hospice; this is not to mention a scene in a car and one in the street outside the hospice that forces the actors to stand below the stage in front of the first row. In a couple of scenes, the walls and furnishings from a previous scene remain in place while a new one has to rely on a fuzzy projection squeezed into a narrow upstage space. The excessive shifts are handled efficiently enough, but the overall effect is unavoidably chintzy. A more abstract, neutral setting, supplemented by projections, like the one now being used for DONOGOO at the Mint, would have done the job much better.


A competent but unexceptionable cast does its best to bring conviction to a plot set in 1992 (with flashbacks to 1968) and driven by Lisa Miller (Nicole M. Carroll), an ambitious young Columbia University journalism student doing an internship at a suburban newspaper, the Glenville Tribune. Her editor is Peter Brooks (Justin R.G. Holland), grizzled, middle-aged, and fond of the bottle. Lisa wants more than anything to make her mark by investigative reporting that will, perhaps, uncover a scandal and bring down someone in power. Peter insists, however, that she do a Memorial Day story, hopefully finding a new angle that will make it worthwhile reading. Coincidence, that useful tool of melodramatists, almost immediately enters the scene when Lisa, playing softball, chases a ball and thereby meets Jack Conti (Ross DeGraw), enjoying the day with his accountant and confidant, the Yiddish-accented Irwin Berger (Anthony Laciura). (Mr. Laciura plays the German-accented Eddie Kessler on “Boardwalk Empire.”) Jack, we will learn, was once Peter’s closest friend, having grown up with him near Niagara Falls, where, as boys, they were considered a sensational infield combination at shortstop and second base. Baseball offers a leitmotif to the play’s atmosphere.


Even though they've just met her in the park, Jack and his wife, Kay (Christine Marie Heath), invite Lisa to their home for dinner, where we not only learn that Jack retired early from a successful practice as a doctor, but that Kay is a former concert pianist of world renown. While Jack reads an article that Lisa wrote on a discussion of morality, the action stops as Kay offers an extended performance of Beethoven’s “Moonlight Sonata.” Jack can’t help being annoyed by what he terms Lisa’s journalistic use of euphemisms in her article, and an argument erupts that so infuriates Lisa she determines to use her reporting to get revenge on him. Based on the examples Jack cites, the argument seems blown way out of proportion, but after an hour of often digressive talk (like a story about a musically gifted Nepalese child with polio, or a conversation about Irwin and Lisa’s personal passions) and exposition that take forever to get somewhere, it helps to pry one’s eyes open a bit.


As the play trudges along under Mr. Iacovelli's direction, Lisa makes many phone calls trying to get some background on Jack, using Peter’s office telephone, which has a speaker system that conveniently allows her callers to be heard by the audience. Rather than dial anyone’s number, she simply asks an instantly available operator to get her whoever it is she’s calling, and, faster than the as yet unavailable Internet, the other party’s on the phone. Eventually, she inadvertently discovers that Jack was once in serious trouble as someone who ran off to Canada (working on the Canadian side of Niagara Falls) to evade the draft and was arrested on his return, and she gloats at the possibility of exposing him. But Peter, who in yet one more of the play’s unconvincing coincidences, finds out what Lisa knows, confronts her, and—through flashbacks showing the “young Jack” and the “young Peter” at the falls (seen in a video projection)—tells her the truth behind the story, admonishing her: “We don’t need more vindictive reporters in the newsroom.” To this she can only respond, in the timeworn way of all suddenly contrite characters faced with the consequences of good intentions gone awry, “What have I done?” But this isn’t enough for Mr. Repicci, who feels it necessary to add a scene in which Peter, out of the blue, confesses to Kay his having harbored doubts about his sexuality. More egregiously, in a totally unexpected and hard to swallow revelation, the playwright introduces the way Jack’s secretly been seeking redemption for his supposed sins.


As Lisa, Ms. Carroll gabbles too quickly in a high-pitched monotone and brings very little color to a role latent with potential dramatic interest. Mr. Laciura is more effective as the play’s comic relief, while Ms. Heath as Kay is capable and attractive but passionless. Mr. Degraw, a burly actor with a blue-collar quality reminiscent of Ed O’Neill on “Modern Family,” seems an odd choice for the intellectually inclined physician, but he and Mr. Holcomb, as Peter, do bring some reality to their not notably well-written characters.


HONOR BOUND has subject matter some will find compelling regardless of whatever infelicities the writing may contain. However, being honor bound to express my true feelings, I can only say that a play is more than what it’s about; it’s how that subject has been realized in theatrical terms. This one could stand judicious cutting and revision, but for now it is what it is and, like the former draft, its problems can’t easily be evaded.