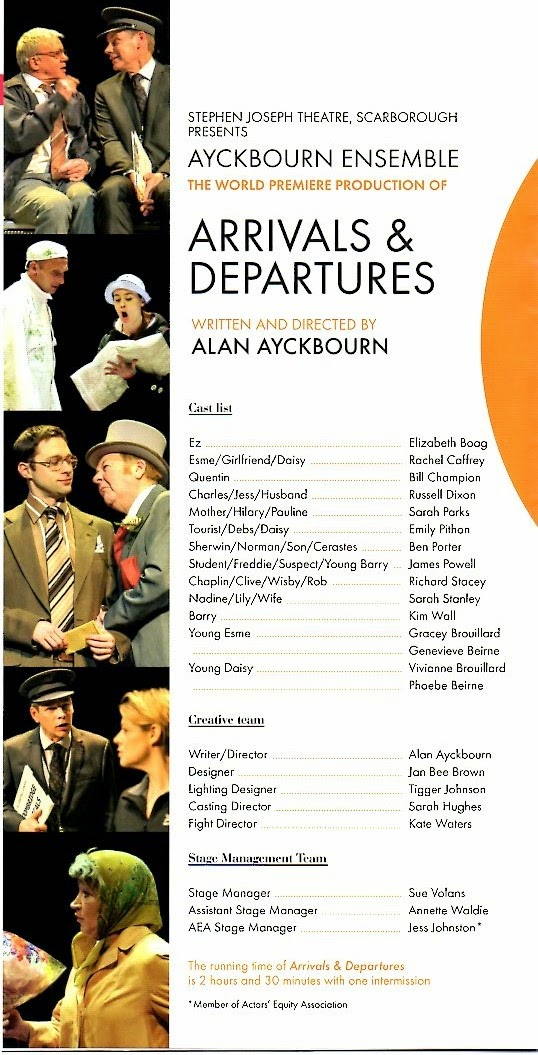 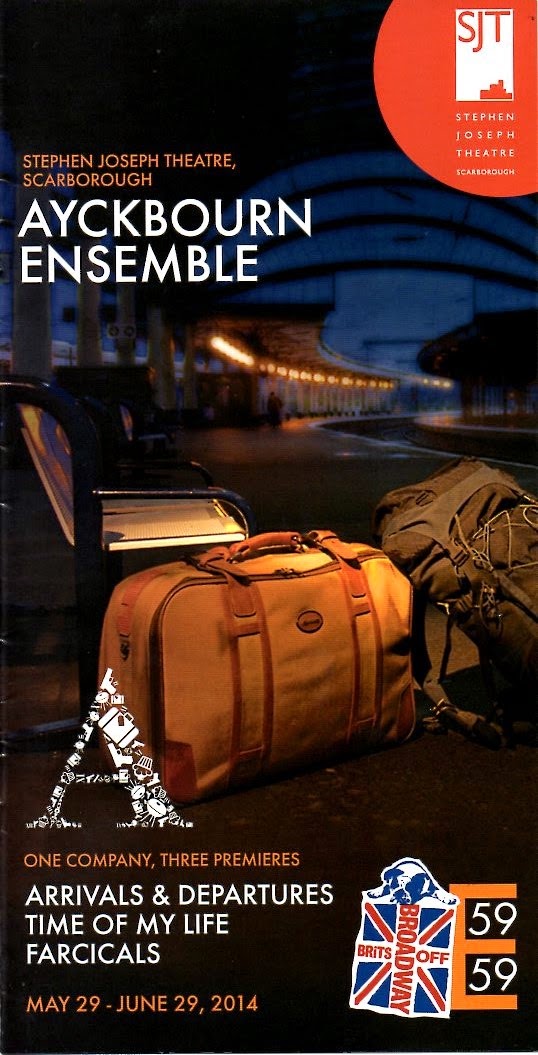 Anyone going to an Alan Ayckbourn play can be forgiven for thinking they’re about to spend a couple of hours laughing at the foibles, usually marital, of the British middle class; they’ll also usually find some subtextual underpinning providing a touch of pathos that gives the comic elements a richer human texture. The 75-year-old Ayckbourn, of course, is the master par excellence of this kind of commercial comedy-drama, with even more plays to his credit (78) than he has years. With ARRIVALS AND DEPARTURES, his often delightful and thoughtful play—being given a marvelous performance at 59E59 as part of a repertory of three plays titled Ayckbourn Ensemble (the others are TIME OF MY LIFE and FARCICALS) during the Brits Off Broadway Festival—the tone is different from what you might have expected. In the two and a half hour  play (with one intermission), which originated at the Stephen Joseph Theatre in Scarborough, England, Mr. Ayckbourn’s base of operations, there are many laughs spread throughout, but the play’s conclusion may take you by surprise. 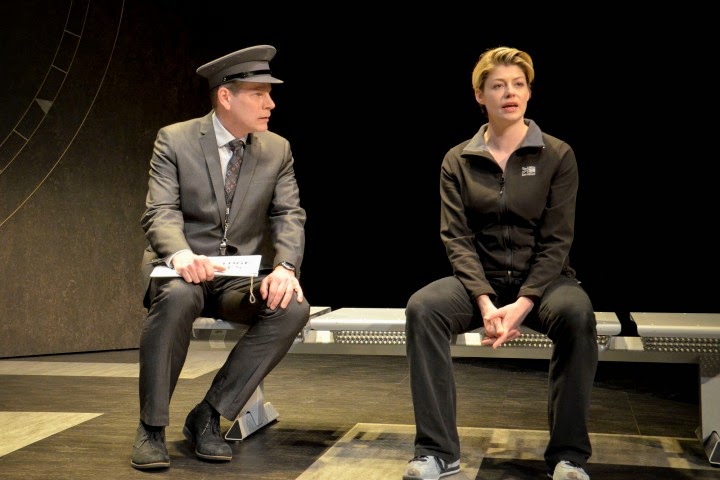 
At first we seem to be watching the playwright satirize the ineptness of a British security operation set up to capture a terrorist codenamed Cerastes (after a venemous viper of that name) at a London train station. The operation is under the command of Quentin (Bill Champion), an egregiously officious officer, dressed as a chauffeur, with a whistle around his neck that he uses to train his seemingly incompetent band of undercover agents. These belong to the Strategic Simulated Distractional Operations Unit (SSDO), an obvious swipe at the pompous names such operations often employ. The unit is rehearsing in plainclothes disguise to make its members seem to be simply a man and his wife with a baby in a stroller, a romantic young couple, a foreigner with a map seeking directions, and the like. Each is so awful in their little sketch—the Norwegian accent the foreigner uses might as well be from Botswana—that Quentin insists on repeating them over and over, even as the clock ticks down to the suspect’s expected arrival, with Quentin demanding he be taken alive. The clumsy exaggerations of the plainclothes characters are broad enough to border on farce, but they’re not quite funny enough to inspire continuous laughter. 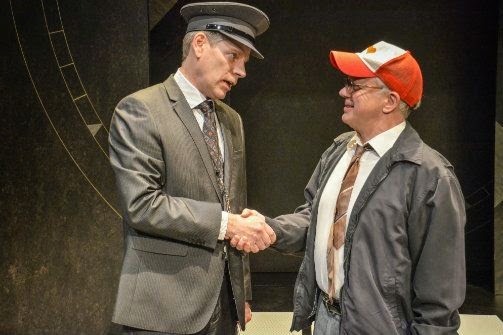 Bill Champion, Kim Wall. Photo: Andrew Higgins.
They are, indeed, not the main purpose of the play, which focuses on a 23-year-old female soldier, Ez Swain (Elizabeth Boag), short for Esme, a troubled woman whose career is in decline, and Barry Hawkins (Kim Wall), a shlubby, white-haired, middle-aged traffic warden from Yorkshire, who has been helicoptered in to help identify the terrorist, since he recently encountered him in a parking ticket incident. Ez is there as Barry’s minder, her mission to protect him from danger. For much of the time, Ez and Barry are alone on stage, waiting for the operation to commence, as Quentin periodically enters to check on them and give instructions, including ordering them to create their own characters so as to blend in and be inconspicuous. Ez is distant, stiff, cold, and bitter. Barry, endowed with a rich Yorkshire accent, is the opposite, being loquacious, cheery, eternally active, and aggressively good natured no matter how often he’s rebuffed. Quentin’s telling Ez and Barry to “merge” fires Barry’s imagination and he attempts to find some common ground with Ez, but her own preoccupations keep her in a bubble of alienation from both Barry and everything else.


As they wait, the lights fade intermittently on Barry while moments from Ez’s life spring into her consciousness and are enacted, until we come to some realization of the painful circumstances that have made this emotionally stifled woman who she is. Act one ends when the terrorist shows up and the SSDO moves into action, seemingly bringing the play to a conclusion. This being an Ayckbourn play, however, we should expect some interesting dramaturgical twist when act two proceeds. And, whether we like it or not, we aren’t disappointed when we soon realize that much of act one is being repeated precisely, except that the staging (Ayckbourn himself directed) is being done in a mirror image of how it happened in act one; now, when the lights dim they do so on Ez, while Barry’s memories come into play, showing the backstory revealing who he is and what travails his life has brought him. Seeing these scenes, against the backdrop of what we now know about Esme, enriches the drama greatly. Again, the terrorist operation concludes the play, but Ayckbourn, who by now has altered the play’s comic mood considerably as we’ve engaged with the heartache in Esme and Barry’s lives, takes us a step further into the darkness before the lights go out for good.


Ayckbourn says in his program note that the idea for the play came from his experience waiting in transportation hubs for a train, plane, or bus, when brief moments from his life would flash by when least expected. He writes that ARRIVALS AND DEPARTURES is “a series of those mental snapshots, each lasting in reality probably only a second, coming and going in the subliminal blink of an eye, now you see them, now you don’t, sometimes gone forever. For the sake of the play . . . I have, as with Japanese dried flowers, unpacked them slightly, given them water and allowed them to unfurl a little.” In the play, the memories of two total strangers, momentarily brought together, are presented, with no interaction between them other than what the circumstances create as the basis for new memories that one of them will live with forever after. There’s a definite poignancy to the ways lives intersect and become entwined with others while so much about each remains hidden beneath the surface, never to emerge.


As with so many Ayckbourn plays, the mechanics of the dramaturgy sometimes take precedence over the reality of the events depicted, but ARRIVALS AND DEPARTURES nevertheless manages to grip you with its depiction of these two lost souls caught up in the vortex of a shared experience but never able to know each other, just as most of us in life never truly know anyone else, even those closest to us. In addition to the play’s shift in dramatic tone, it also might be argued that having both Esme and Barry have such raw backstories, involving sexual and financial betrayal, among other things, might be considered too melodramatic, or that by concluding the play as he does, Ayckbourn is trying to affect us emotionally in a way not organic to his characters’ development. This does, however, offer an opportunity for a touching fantasy sequence at the very end, when two child actresses, playing the young Ez (Gracey Brouillard or Genevieve Beirne, depending on the performance) and Barry’s young daughter, Daisy (Vivianne Brouillard or Phoebe Beirne), briefly merge before parting, but I'll say no more because this is spoiler territory.


Jan Bee Brown’s unobtrusive, clearly low-cost set design is a simple, essentially impersonal arrangement of three steel benches on a black floor with geometric patterns, surrounded by black curtains. Her costumes are spot-on, yet funny, in capturing both the clownish participants in the terrorist operation and the eccentric characters, ranging over different periods, in Ez and Barry’s memories. Making the play even more appealing is Ayckbourn’s impressive direction, both in its pacing, blocking (except, perhaps, for some moments toward the end), and the way each member of the cast brings great clarity to their characterizations. Aside from the actors playing Quentin, Barry, Ez, and the children, the rest of the company all play multiple roles; as with most well-trained British ensembles, even the smallest roles are carefully crafted and distinctively characterized.
Mr. Champion’s Quentin is a perfect example of British self-importance and pigheadedness, while Ms. Boag’s Ez and Mr. Wall’s Barry are exemplary portrayals that are among the finest of the young season thus far. Ms. Boag makes Ez defensive, hostile yet civil, and achingly vulnerable within a shell of military self-confidence. Mr. Wall’s performance is more flamboyant, being a bundle of nervous tics, shaking knees, facial grimaces, mumblings to himself, and cheerful smiles. All of it masks the demons eating at him as a good man who has let life step all over him yet who struggles to keep himself (and others) positive, finding the best in others, even when they don’t deserve it.


Note: Theatre A at 59E59 provides assisted listening devices to those who need them.
Posted by Samuel L. Leiter at 2:41 AM