The title of Bess Wohl’s flavorsome but occasionally over spiced new play at the Second Stage Uptown’s McGinn/Cazale Theatre is a decent pun on a kind of sandwich and the people who, in this work at any rate, might be considered the phrase’s ironic targets. Jamie (Ari Graynor, of TV’s recent “Bad Teacher”) is a sexed-up 33-year-old divorcée, fired from her Supercuts job for stealing mousse, and fighting a custody battle over her kids; Ted (Jerry O’Connell) is a stalwart-looking family man in his early 40s, who looks like he should be wearing a suit and tie rather than an orange counterman’s jersey, and indeed was such a person—with an MBA no less—until laid off by Bank of America; and Sheri (Erin Wilhelmi) is a slight, 18-year-old bundle of nerves who cares for her ailing father and sleeps in her car between her two jobs. One of those is at a Quiznos-like sandwich shop that has just opened at a strip mall, where she and the others have been hired. Sheri is assigned to be the “baser,” who opens the bread and adds mustard, mayonnaise, or whatever; Ted is the “finisher,” who adds all the ingredients of meat, veggies, and the like; and Jamie is the “wrapper,” who wraps the finished Torpedo, the franchise product. 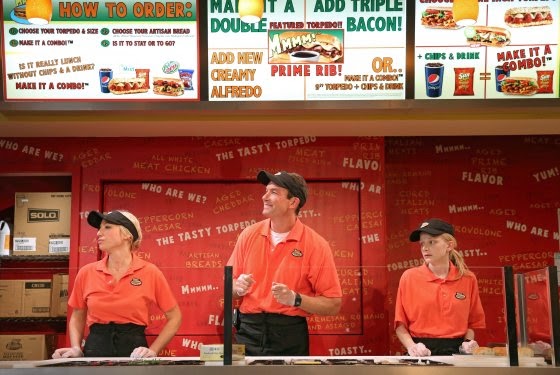 
This needy trio is hired by the manager, Bob (Daoud Heidami), an immigrant who could be Middle Eastern or South Asian and who spent $450K for his piece of an unnamed national sandwich franchise we soon learn is going to the dogs. The early scenes, played as broad farce, show Bob hiring and then training his team in their culinary duties, reading instructions from a thick manual that amusingly satirizes the company’s effort to bolster the sense of importance in the responsibilities of slicing bread, squirting sauce, slapping food, and serving the results. When, after a couple of trial runs at making a sandwich in 20 seconds fail (of course, some people take that long just to make up their minds), the audience claps when the team succeeds in putting a sandwich together in 19 seconds.


Bob, the play’s most cartoonish person, whose background in his native country as a dermatologist doesn’t jibe with the loud, foolish way he’s forced to behave, fails to show up for the shop’s grand opening, or afterward, and the play begins to shift into a variety of stylistically different gears, including melodrama and surrealism (a living sandwich, played by Mr. Heidami, appears in a dream scene). We see how the cynical Jamie, the ambitious Ted (he hopes to move up the corporate ladder), and the inferiority-plagued but resourceful-in-spite-of-herself Sheri cope with the lack of managerial oversight, the depletion of their food supplies, and the receipt of directions from an out-of-touch corporate headquarters to keep the shop going.


Their jobs are so precious to them in the failed American economy that, instead of simply walking out and finding other equally mundane positions elsewhere, Jamie, Ted, and Sheri determine to show their American stick-to-itiveness. Using their survival instincts, they find creative ways of keeping the shop alive with sandwiches of their own devising. This type of American heroism eventually is rewarded in a climactic scene involving a surprise visit from “corporate” (Mr. Heidami again), although this representative of the company will first get in a few licks of his own against the scary system of which he’s as much a victim (albeit on a higher pay scale) as are the basers, finishers, and wrappers at the bottom.


Ms. Wohl is adept at creating comic situations and funny dialogue, but she’s not yet as capable of creating a sustained tone that keeps you accepting her characters and story in what is set up to represent a believable world with convincing characters. Dean Laffrey’s set, which—apart from the deliberate lack of sandwich prices—is so naturalistic you feel like placing an order yourself, received its own article in the New York Times (http://www.nytimes.com/2014/05/29/theater/dean-laffrey-on-his-set-for-american-hero.html?_r=0), although such detailed exactitude in creating a stage setting for a restaurant can be traced back to David Belasco’s Broadway production of THE GOVERNOR’S LADY (1912), which replicated not only the look but the cooking smells of a Child’s Restaurant.


The cast, under Leigh Silverman’s fine direction, is excellent at making their thinly written “sandwich artists” seem realer than they are, although Mr. Heidami is better at his later characters than he is as the overwrought Bob. Ms. Gaynor has just the right sexual insouciance to make Jamie’s opening scenes work, but the character’s development into a knife-wielding hellion is something no actress could make persuasive. Ted also has elements that are questionable but Mr. O’Connell is usually very good at making you accept them. Ms. Wilhelmi, who was excellent earlier this year in CORE VALUES and THE GREAT IMMENSITY, uses a high, piping voice that can be annoying, but she’s a sui generis kind of actress and will surely continue to be seen, especially while she continues to look as young as she does (she holds a BFA from the University of Evansville).


AMERICAN HERO, produced as part of a program for emerging playwrights, deals satirically with serious issues regarding corporate America and the struggles of the minimum-wage working class, but its themes are sandwiched between characters and plotting that don’t always combine the best ingredients. I recommend the sweet green peppers.
Posted by Samuel L. Leiter at 1:15 PM