My review of the Shakespeare in the Park production of MUCH ADO ABOUT NOTHING will be posted on Monday night, June 16, after it officially opens. What follows here is a prelude to the review describing the experience of waiting to find out if the show would survive a major storm.


SEEING IN THE RAIN:
PRELUDE TO A REVIEW OF MUCH ADO ABOUT NOTHING 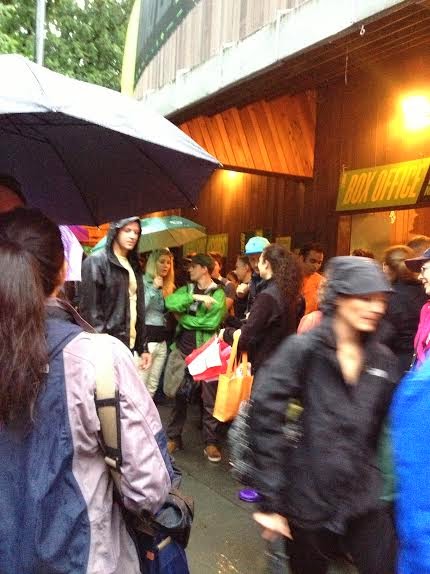 Starting from the time the Delacorte Theatre in Central Park opened in 1962 (it was designed by my theatre design teacher, Eldon Elder) I was a regular attendee each summer at Shakespeare in the Park. As you know, the standard routine is to come early in the morning, get a place on line, often while sitting on a blanket or folding chair, and wait patiently for someone to begin distributing tickets for that evening’s performance around noon, after which you can leave before returning to see the show. I followed this routine for many years, although not every summer, but I stopped in 1986 when, after waiting hours for tickets to MEDEA, staged by the great Japanese director Yukio Ninagawa, they ran out of tickets one person before me. Since I had to travel all the way from Howard Beach, and I was busy with  so many other things, I decided it was simply no longer worth my while. 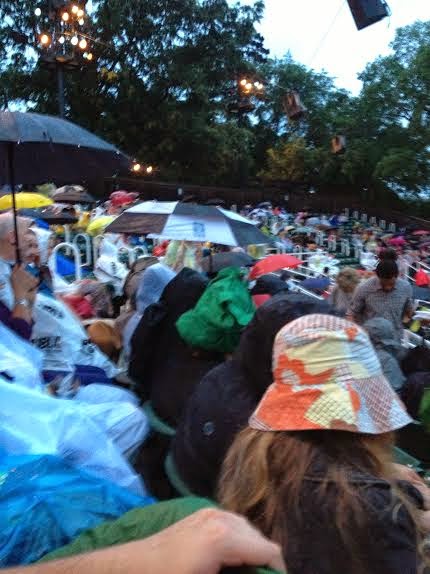 In 2002 my friend and former student, the wonderful actor Jimmy Smits, was playing Orsino in TWELFTH NIGHT and he put two seats aside for me so I wouldn’t have to wait on line. As luck would have it, there was an incredible thunderstorm that day, so fierce it downed an overpass on the Grand Central Parkway, and I assumed the show would be canceled, so I didn’t show up. I don’t recall if it went on or not, and I didn’t want to bother Jimmy for seats to another performance, but it would have been the first time in all my years of visiting Shakespeare in the Park that a show I was heading for was rained out. Over the past two years, I’ve been able to go with the benefit of press seats, but these come with the caveat that you must show up and wait for an official announcement determining the fate of the evening’s performance. And that’s what I did last night, Friday the 13th, when New York was hit by violent thunderstorms and lightning between 6:00 and 8:00 p.m., while I was on my way to see MUCH ADO ABOUT NOTHING. 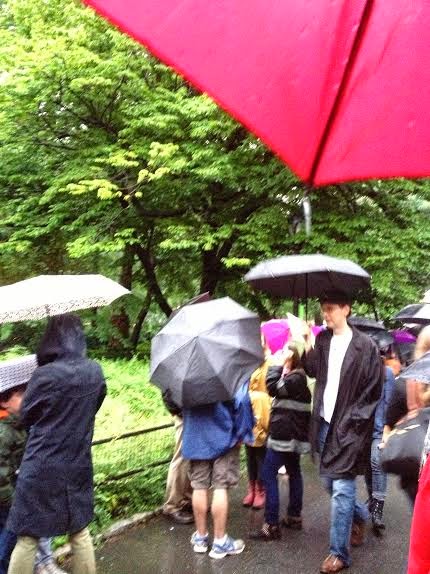 The roiling clouds overhead in my Queens neighborhood were like gigantic, computer-generated ones in a biblical movie when, at 6:30 p.m., I got on the subway for the hour-long trip, but the rain was only beginning at this point. I hoped that the skies would empty themselves during the ride and that when I reached Central Park the worst would be over. As people entered the car along the way, I looked carefully to see how wet they were and how much water was dripping from their umbrellas. The closer the train drew to my destination, the more drenched were the passengers. On exiting at the Museum of Natural History stop, I thought that the crowd clogging the stairwell augured ill, as people were slowing down to open their umbrellas. The rain, while not overpowering, was coming down steadily. It was dark and dreary on Central Park West, even though it was only 7:30, when the sun still should have been shining. 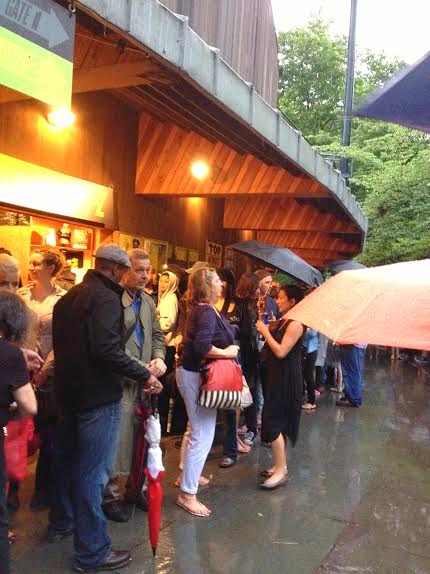 I entered the park where, along the path leading to the Delacorte Theatre, a slim but steady line of people was heading in the same direction. This gave me hope that, if others were going to the play, even under these conditions, maybe they knew something I didn’t. At one point, a man was hustling plastic ponchos at five bucks a pop, stating that no open umbrellas were allowed in the theatre. The theatre itself was selling its own white ponchos, with the words Public Theatre scattered all over them: these were selling fast at $15 each.
Outside the box office, the press reps for the Public Theatre, which runs Shakespeare in the Park, said we had to wait for an official announcement as to whether the show would go on. A crowd was packed beneath the awning surrounding the theatre’s front, open umbrellas raised, but my theatre companion, who had been waiting for me when I arrived, stood with me in the open, where we had a bit more room to move, although my left arm, couldn’t help getting peed on by the gods. The press reps said I could exchange my seats for Saturday or Sunday’s performances but I decided to stick it out for the announcement, since I already had tickets to other shows for the weekend. The rain began to slacken around 8:00 and, sure enough, at 8:10, an attendant began shouting to the surprisingly substantial, if not overwhelming crowd, that “The house is open!” and we filed in slowly on the wet flooring. 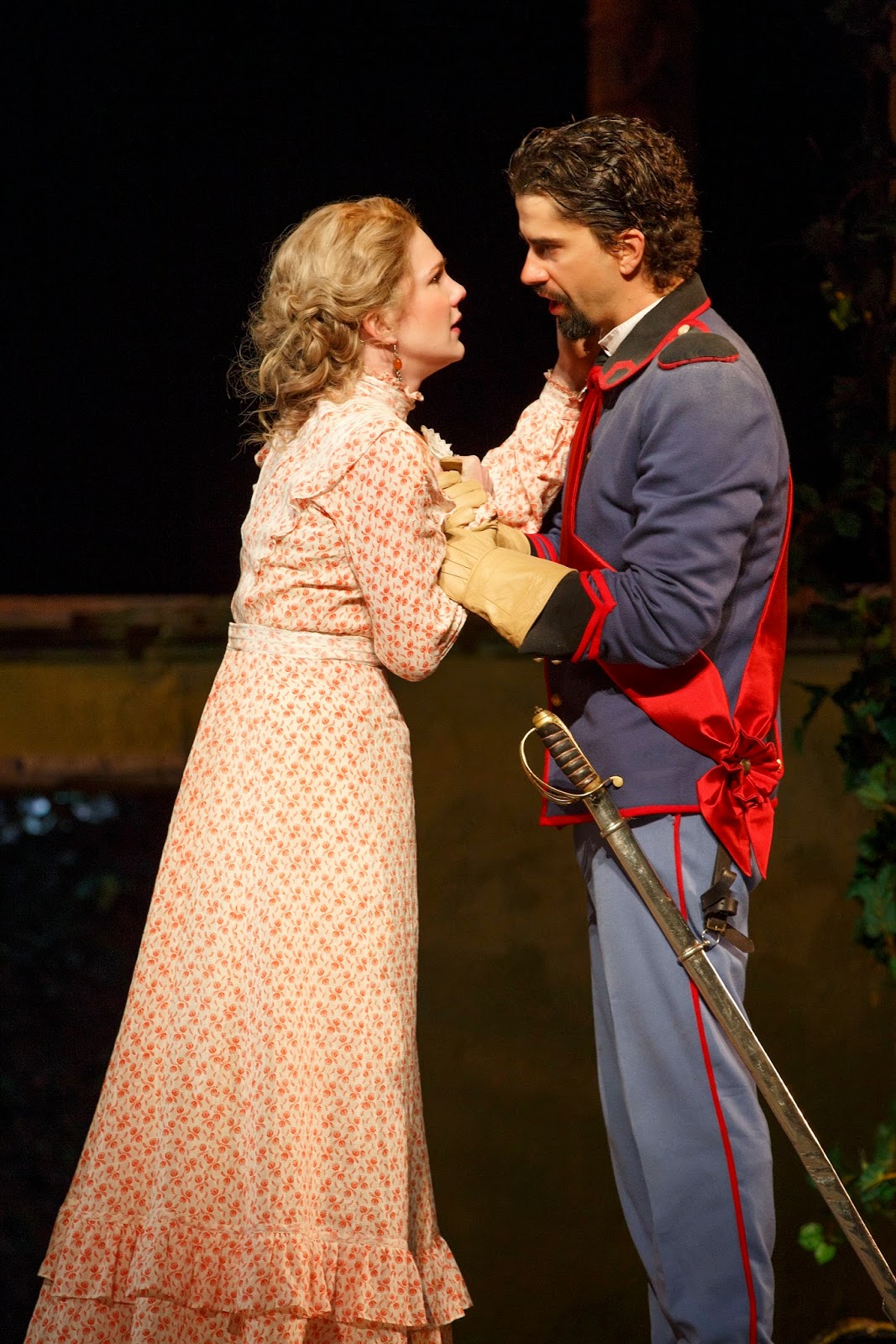 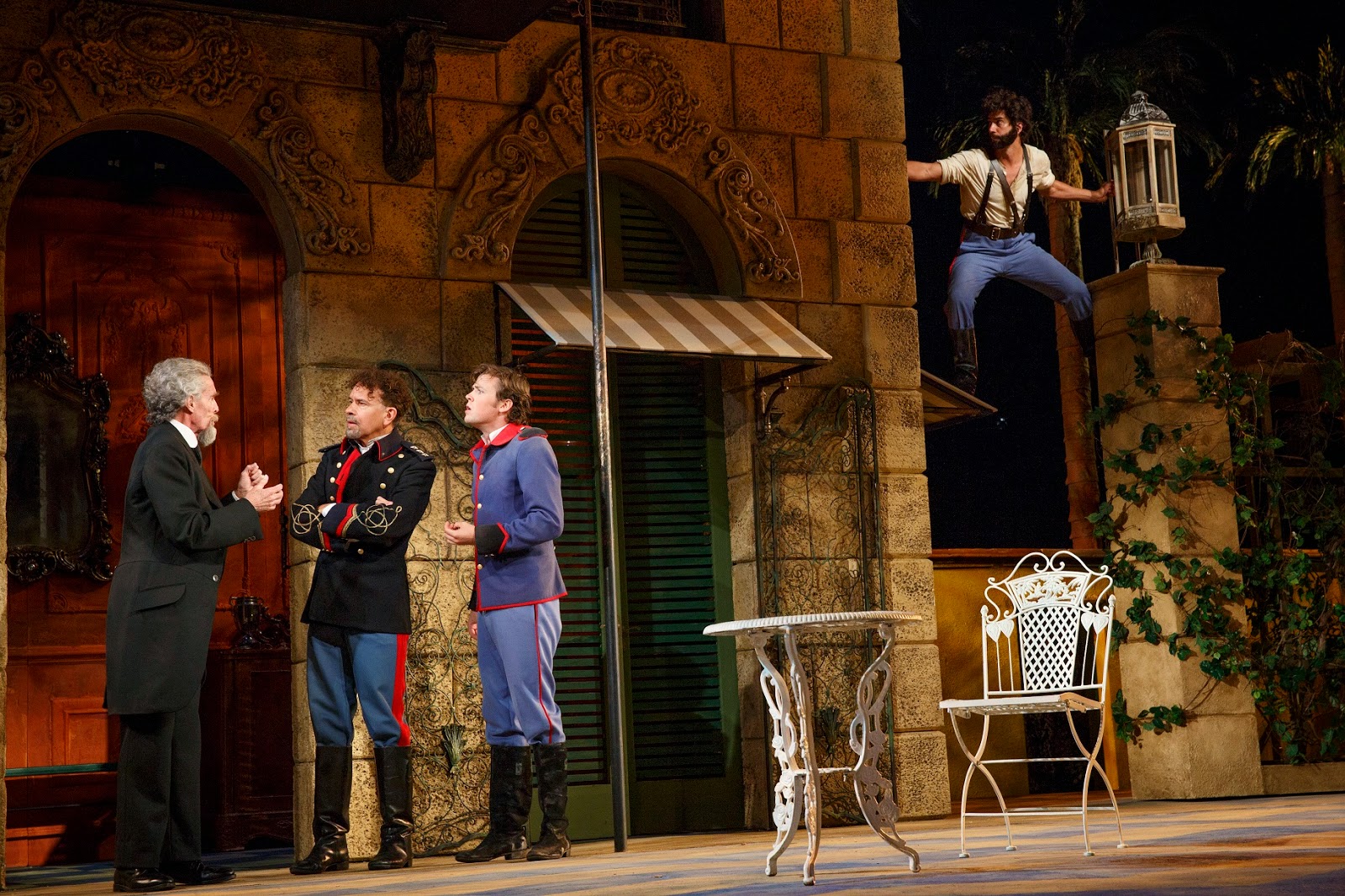 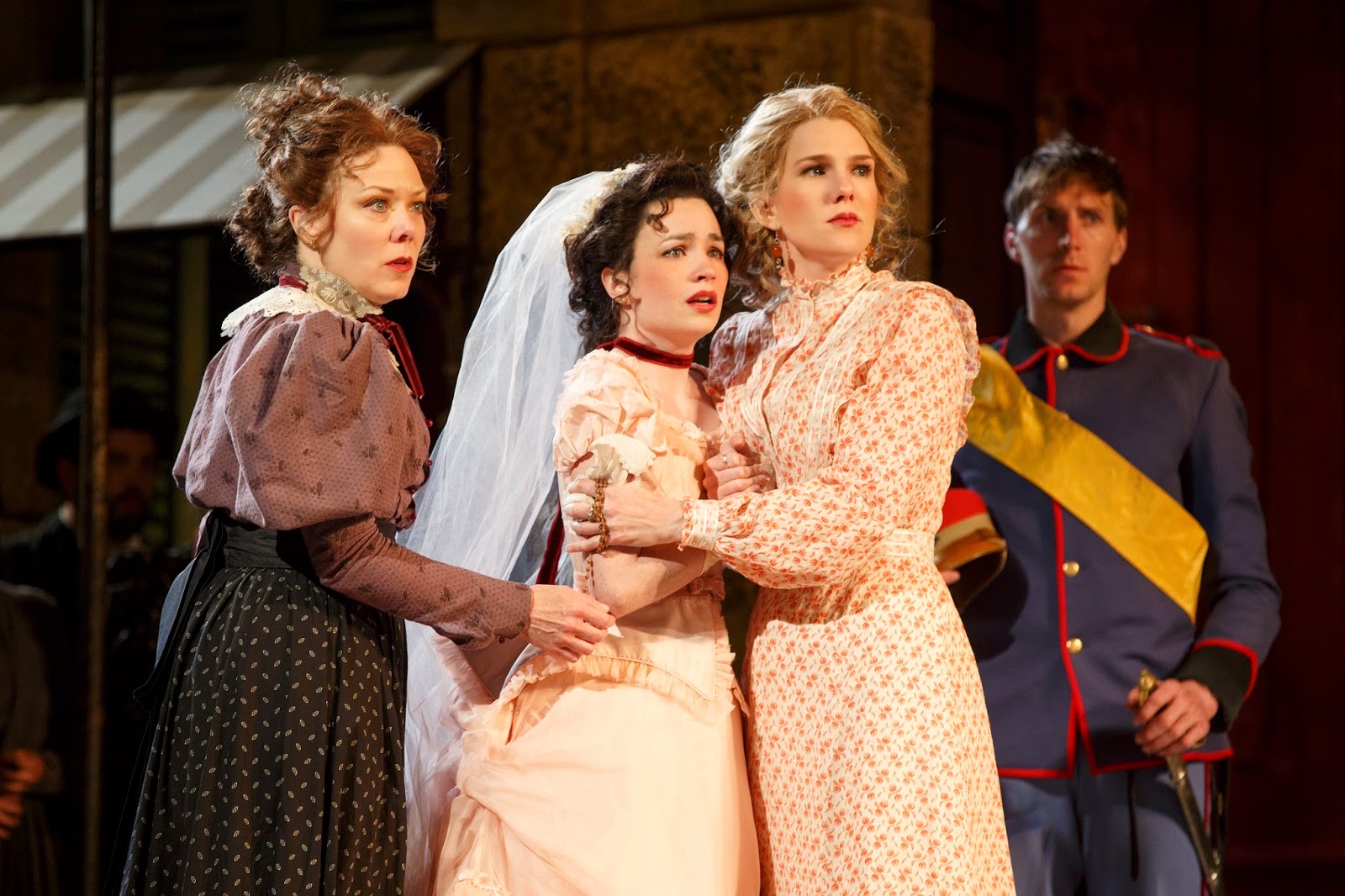 
Inside, a young couple was sitting in our seats when they were supposed to be in a row further back; when they moved, they laughed about having dried and warmed our seats for us. My friend was well equipped for the event, and loaned me a nice yellow poncho, which, silly as it looked, offered good protection. But within a few minutes, as we watched the stage crew mop John Lee Beatty's set, the rain came to an end, and by the time the play finally began, at 8:40 (it ended at 11:30), we were in sunny Messina, Sicily, the vegetable garden and orange tree on the set were blooming, and all the fuss about the weather, which remained lovely, with the balmiest of breezes, turned out to be much ado about, well, if not nothing, then not very much after all.
Posted by Samuel L. Leiter at 1:54 PM