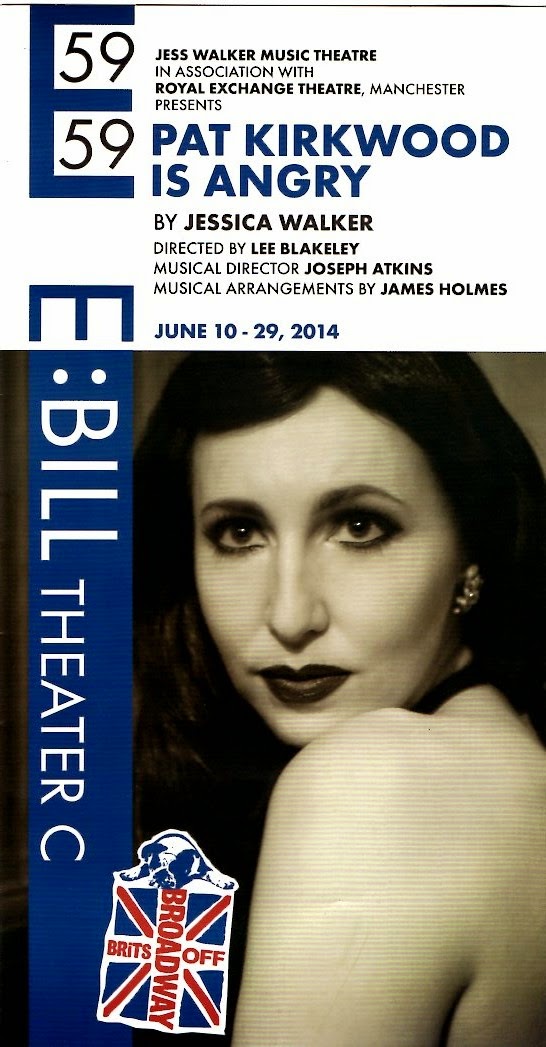 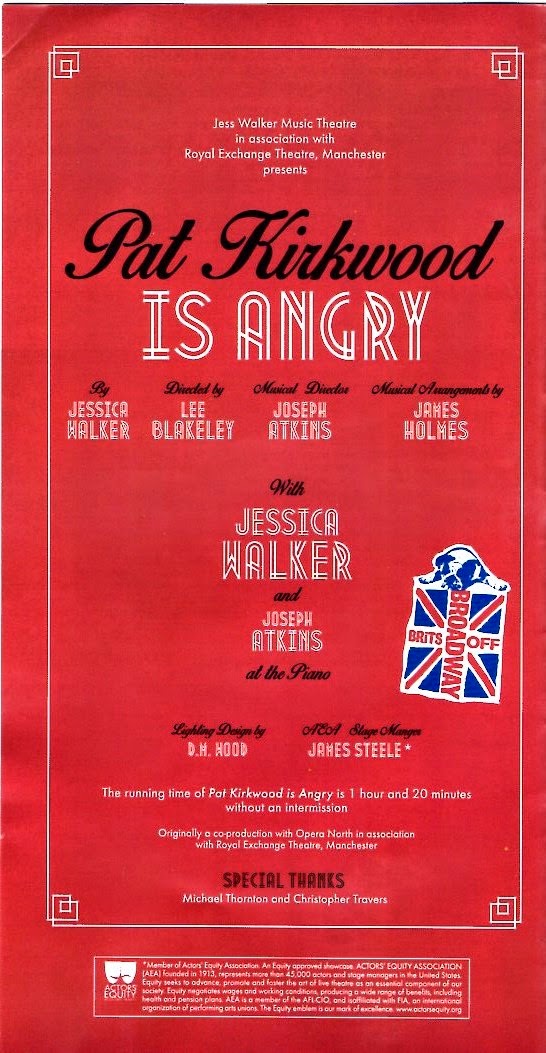 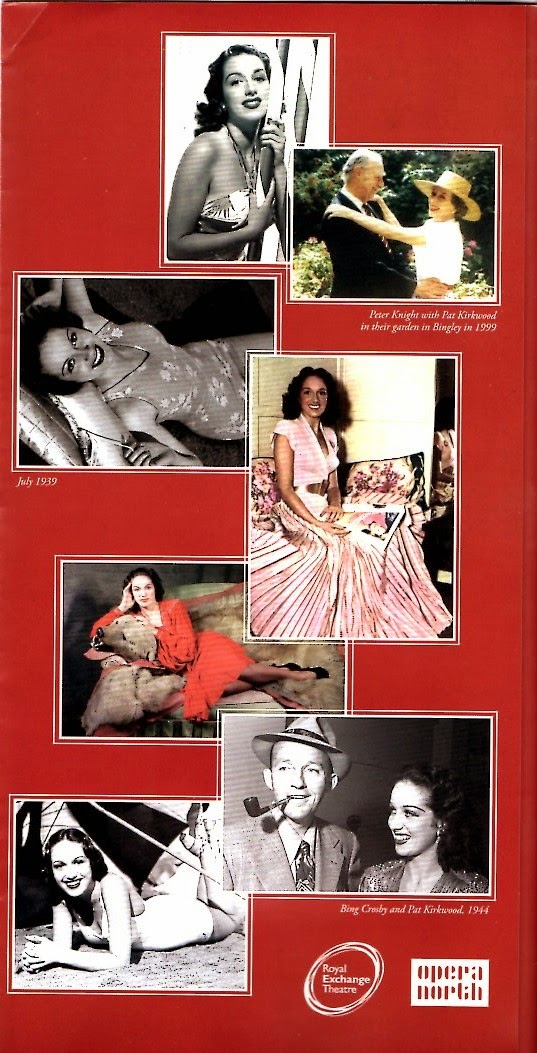 What? You don’t know who Pat Kirkwood was? Don’t worry. Neither did I until I saw this mildly engaging one-woman show about her, written and performed by British actress-singer Jessica Walker at 59E59’s tiny Theatre C. Just about this time last year, Ms. Walker performed her enlightening solo show THE GIRL I LEFT BEHIND in the same venue. Like PAT KIRKWOOD IS ANGRY, it had been set up cabaret style with tiny tables and lamps facing a miniscule platform with barely enough room for Ms. Walker and her gifted accompanist/musical director, Joseph Atkins, who is once again at the piano. This blog responded positively to that show, which surveyed many of the old-time British music hall women, like Vesta Tilley, who performed in male drag. I wasn’t as enthused by Ms. Walker’s current effort, directed by Lee Blakely, although it’s only fair to acknowledge that other reviewers disagree. 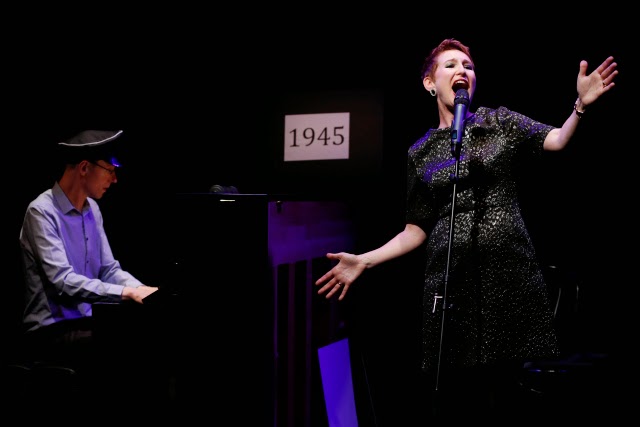 Joseph Atkins, Jessica Walker. Photo: Carol Rosegg.
Pat Kirkwood (1921-2007) was an attractive actress-singer known for her work in music halls, theatre, cabaret, British pantomime, radio, films, and TV. She sang many of the familiar standards of the mid-century, was married four times and, while popular through the war years (as "Britain's first wartime star") and for years afterward, never rose to international stardom status. Her career had the usual ups and downs, but was most notable for an encounter in 1948 with Prince Philip, the Duke of Edinburgh and husband of then Princess Elizabeth, eight months pregnant. The prince and Pat had dinner together after one of her shows at the London Hippodrome, and breakfast the following morning. The press was onto the story at once and blew it up into a major scandal, although Pat denied there having been anything involved other than conversation and laughs. Letters from the duke arrived many years later, although they didn't go as far as Pat would have liked in clearing the air. She claimed that the incident, such as it was, ruined her career, but, judging from her having continued to perform regularly for many years afterward, it’s hard to say with certainty that the story of the “prince and the showgirl” was the reason for her never reaching the level of, say, a Julie Andrews (who also figures in Kirkwood’s bio). We eventually learn that the effect of malicious gossip created by the incident is what made Kirkwood angry, although what comes through on stage seems more like crankiness to me.


Placards with specific years printed on them sit at Mr. Atkins’s left side; as the narrative progresses he slides them off to show which year we’re hearing about at any particular moment. He also changes hats to heighten the sense of changing periods; thus a civil defense helmet is worn when Kirkwood continues performing during an air raid. Kirkwood talks of her experiences in Hollywood; her various husbands; her British costars (many of them as unfamiliar to American audiences as her); her appearance in ACE OF CLUBS, a show Noel Coward wrote for her; the health issues induced by Hollywood’s insistence on pills to make her thinner; her mother’s Alzheimer’s; her displeasure at never being named a Dame of the British Empire when others she disparages were; her appearance in 1994 on England’s “This Is Your Life” TV show (an unpleasant experience, to hear her tell it); and her own decline into dementia and death. Some of this is interesting and affecting, as stories about the trials and tribulations of famous people in show business tend to be, but I found very little about it illuminating. Music is heard throughout, as almost all the narration is delivered to Mr. Atkins’s accompaniment; the effect is rather like typical cabaret patter but it does help keep the energy level up.


You can visit YouTube to see for yourself if Kirkwood, for all the hype, had what it would have taken to be a major star. TV clips and recorded songs show her to be a vivacious singer with lots of facial expression and personality but certainly not with anything remarkable about her vocally or physically, although she was alluring in the style of the day. The glamour photo on the cover of the show’s program is of Ms. Walker, in a wig, not of Kirkwood, although there are good pictures of Kirkwood inside the program.


Ms. Walker makes no effort at all to replicate Kirkwood’s look or voice. She wears a simple, sequined black dress, which stops slightly above the knee, black stockings, and heels. Later in the show, as Kirkwood ages, the heels are switched for flats, and a black tuxedo jacket is put on. Her red hair, unlike the period hairstyles seen in photos and clips of the brunette original, is cut stylishly short in a pixie. Ms. Walker’s voice has been described as mezzo-soprano, and seems comfortable in that range on only a few of the over 20 songs she sings (some of them abbreviated in medley fashion); it can sound strained when forced to sing music in a lower register. The songs, although related to her career, are often inserted at points where they can be performed with interpretations that underline moments in her life. This can lead to over-dramatization, as with “Bewitched, Bothered, and Bewildered,” but can serve the material nicely, as when she sings “Begin the Beguine,” which is probably the show's standout moment. Cole Porter, she tells us, was a good friend and said she could sing any of his songs, anytime.


The song list includes standards most gray-haired theatergoers will know, such as “Oh, Johnny, Oh, Johnny, Oh!,” “Just One of Those Things,” “Guess Who I Saw Today,” and “For All We Know.” Though competently rendered, there’s nothing about the way they’re sung that makes them unique. Listen to the late Edie Gormé sing “Guess Who I Saw Today,” for example, and you may find Ms. Walker’s version merely passable. Among the less well-known numbers is “Love on a Greyhound Bus,” of which there’s a clip on YouTube from the movie in which Kirkwood sang it. Her styling is in the boogie-woogie vein of the 1940s, which perfectly nails this otherwise forgettable tune to its period and makes it live. Ms. Walker chooses to avoid the boogie-woogie style to help give its lyrics biographical relevance, and the song never fully recovers.


As I’ve noted, other reviewers enjoyed PAT KIRKWOOD IS ANGRY more than I, and the mostly middle-aged and older audience when I visited was having a great time. Still, I admit that as I walked to the subway, I was unable to keep the final song’s beautiful words and music from invading my heart: “For all we know, we may never meet again. Before you go, make this moment sweet again. . . . So love me tonight, tomorrow was made for some, Tomorrow may never come for all we know.” It may not be Pat Kirkwood, Nat King Cole, or the Andrews Sisters, but it's good to know someone's still singing these songs.
Posted by Samuel L. Leiter at 11:44 AM