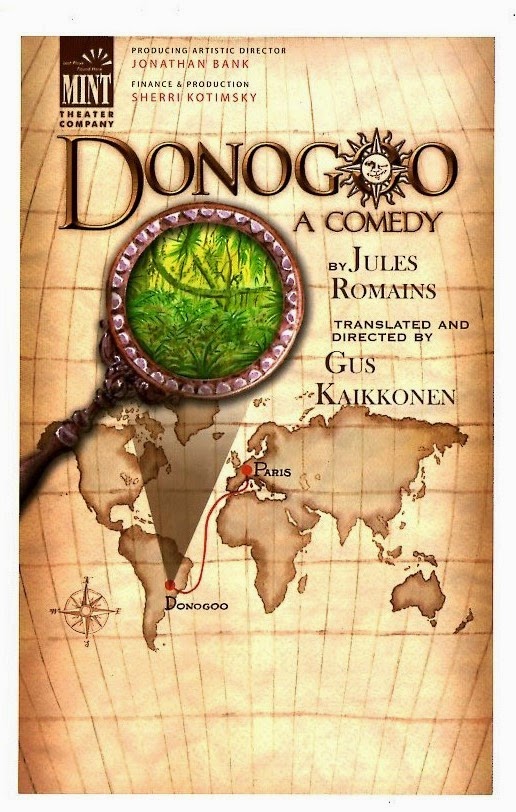 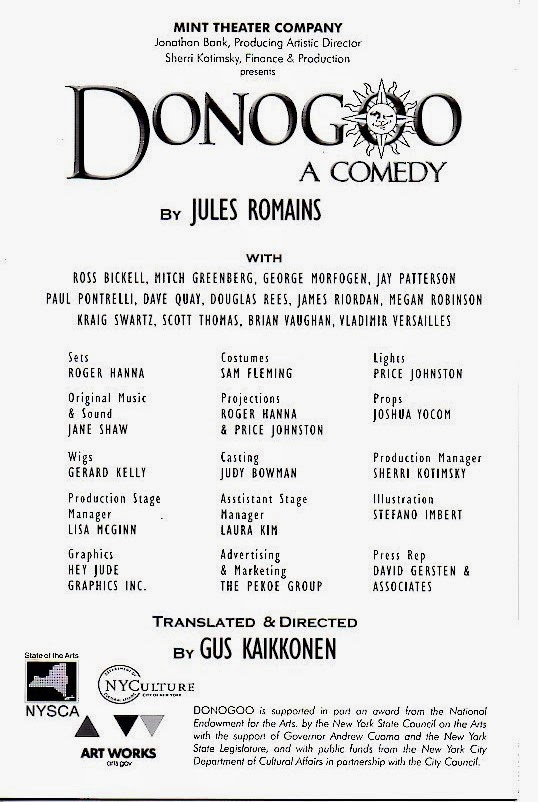 As a playwright, Jules Romains remains best known for his 1923 comedy DR. KNOCK, directed by and starring Louis Jouvet, one of France’s greatest modern theatre artists. It was frequently revived by Jouvet, who also starred in the famous 1951 movie version. The Mint theatre offered its own revival in 2010. Less well known abroad is Romains’s DONOGOO, a dramatic adaptation of his 1920 novel, DONOGOO, OR THE MYSTERIES OF SCIENCE. When the technologically advanced Théâtre Pigalle opened in Paris in 1929 it proved the perfect venue for the staging in 1930 of Romains's adaptation of his novel, the play being a complex, 23-"tableaux" satire with scenes set over a wide expanse of the globe, although mainly in Paris and Brazil. 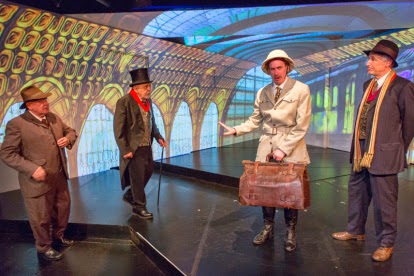 
Judging from extant photos, the production combined highly cartoonish sets with more realistic ones (including an impressive-looking train). It also employed a rather sizable company. Thus for the tiny Mint Theatre, devoted to unearthing forgotten theatrical treasures with limited financial resources, to attempt DONOGOO would seem a foolhardy adventure. Nonetheless, the Mint’s designers, Roger Hanna and Price Johnston (who also did the lights), have managed to pull the job off by an extremely clever use of sliding floor sections for moving people and furniture on and off combined with an exceptional projection design that allows for vividly colored and highly detailed painterly backgrounds that come into view via sweeping movements across the two side walls, built in forced perspective so that they join in a corner up center. A ceiling assists greatly in tying the projections together. Doors that slide open and shut do so without breaking the illusion, since the projections on them move off or on with them. The projections are both still and moving, and even allow for funny effects, such as when the contents of a seasick boat passenger’s stomach seem to fly out of his mouth into the sea. The overall scenic impression looks far more unified than that of the 1930 show, and is the revival’s big takeaway. The problem of casting is handled efficiently by a cast of 13 (itself almost too large for the Mint’s stage) playing 52 roles, although the substantial crowd scenes in the original have been sacrificed in the process. Sam Fleming’s numerous costumes are often amusing and helpfully character defining.


DONOGOO, directed and translated by Gus Kaikkonen, is an interesting piece to meet for the first time, but rather limited in popular appeal and not necessarily worthy of revival (its only previous New York showing was directed by Adrian Hall at the Greenwich Mews in 1961). Its scenic realization apart, moreover, this production is not the one it requires to bring out its theatrical qualities. The play is reminiscent of the as yet to be born Theatre of the Absurd, and its characters and situations veer from the clownishly silly to the fairly realistic, keeping you off guard in what, if well done, just might be a charming theatricalist entertainment; its mildly thoughtful arrows aim at a host of still relevant issues, such as colonialism, patriotism, stock speculation, exploitation of a native people, psychoanalysis, scientific truth and error, and so on, including, near the end, sex in politics. Still, these targets are all over the place and Romains's play, which may have seemed radical in 1930, doesn't actually say anything about them we haven't heard before.


The odd title is taken from a location in Brazil supposedly discovered by the renowned geologist Yves Le Trouhadec. Lamendin (James Riordan), a failed architect and artist, learns about this after a friend, Benin (Mitch Greenberg), stops him from jumping to his death off a bridge and sends him to famous shrink Dr. Miguel Rufisque (George Morfogen), an apparent quack who uses “biometric psychotherapy” to analyze people. He straps his patients in an electric chair-like contraption connected to a machine he’s invented that examines all one’s thoughts. This allows the analyst, using his extraordinary mathematical skills, to determine the solution to their problems.
Lamendin is told by the analyst to wait at a particular time and place for someone to blow his nose. Finally, the nose-blower turns out to be Trouhadec (Mr. Morfogen), the geologist, to whom Lamendin, as part of his cure, attaches himself with slave-like devotion. Trouhadec is desperate to be voted into the Academy of Sciences within the next six months and would be a shoo-in because of his massive publication on Brazil but for the fact that the tome mistakenly discusses Donogoo-Tonka, an El Dorado type place that doesn’t actually exist.


To demonstrate his devotion and help Le Trouhadec be elected, Lamedin sets out to create a real Donogoo-Tonka, joining up with a banker (Ross Bickell) who sees the possibilities of making a killing by defrauding the public by raising $75 million on a land development scheme in Brazil. When the word gets out, world-wide speculation springs up, and people not only buy the company’s stock but begin to venture to Donogoo in search of it; locals exploit the financial possibilities raised by the influx of foreigners, while the foreigners arrive in search of the gold that’s supposed to be there for the taking (it’s not). When no actual Donogoo materializes, the intrepid explorers find a suitable spot and build it from scratch. Lamedin himself ultimately arrives in the role of governor general, with discontent brewing both about his presence and about the belief by the town’s founders that they've been exploited for the company’s profit. Lamendin immediately assumes his position with a show of colonialist power-grabbing assurance, while promising to pay the workers well. He thereby puts into practice the way he sees his position: “I am a middle road between an old-fashioned patriarchal regime and a modern dictator.”


DONOGOO’s two acts run two hours and 20 minutes; with its numerous scenes (whose shifts are speedily expedited by the projection concept) and talkativeness, the piece, never very funny to begin with, eventually runs out of gas, and no amount of scenic cleverness can do anything about it. Still, there are some satirically enjoyable rewards sprinkled through the text, including a final scene between Lamedin and Benin, in which Lamedin, the would-be suicide who becomes a colonialist ruler, is a suitably comic representative of the abuses of power.
Staging a broadly drawn satire like this, with its many fantastical features mixed with everyday ones, requires finding just the right style, one that requires a proper blend of believability, farcical exaggeration, and even a touch of the grotesque. Mr. Kaikkonen’s staging has only scattered moments of heightened theatricality and too many of straightforward dramatic acting, which deflates the humorous aura of otherworldliness and brings everything down to earth. Mr. Morfogen comes close to capturing the proper off-kilter tone, but few of the other actors, including such veterans as Jay Patterson and Ross Bickell, do much to provide anything distinctive. The most serious problem is James Riordan’s Lamedin, played stolidly and without charm or comic élan. To be honest, I can’t think of many American actors who might succeed in the part, which even Nathan Lane might find impossible.


Perhaps someone else will tackle this play someday. But until the right actors can be assembled for it, combined with the right seriocomic tone and acting style, I’d put DONOGOO back on the shelf.