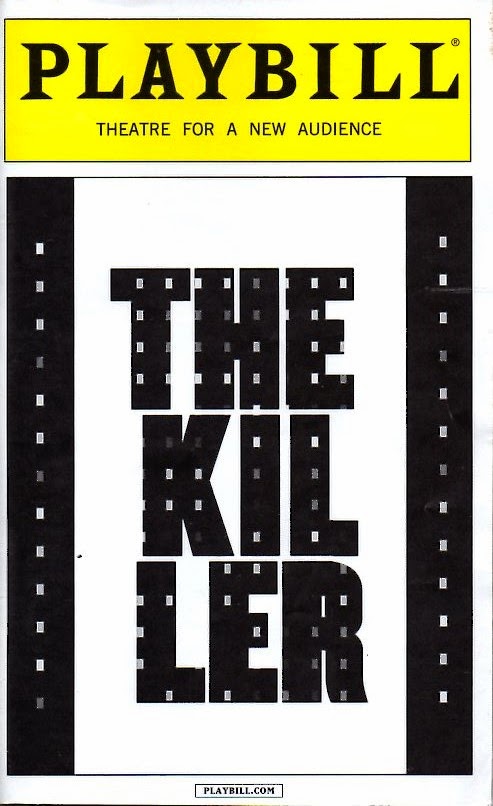 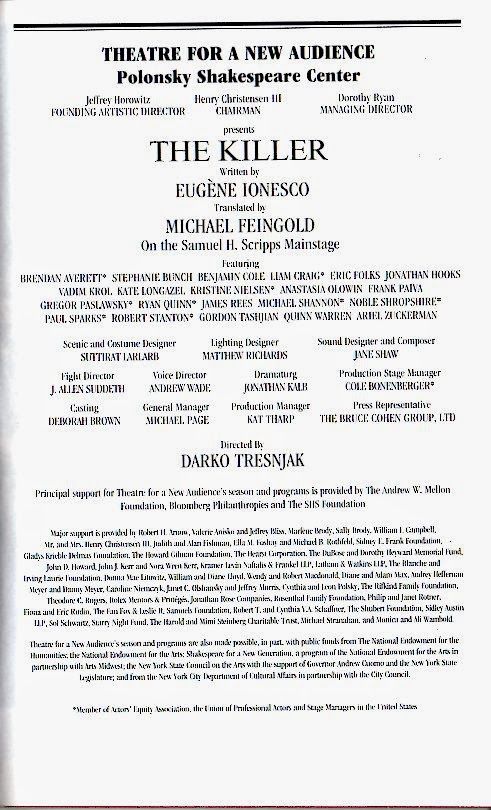 Given certain of Michael Shannon’s eccentric roles in movies and on TV, it’s likely that some theatergoers will have the impression that he plays the title role in THE KILLER (Tueur sans Gage, literally, Killer without Reward), the snooze-worthy revival of Eugene Ionesco’s absurdist play (written 1957; produced in Paris 1958) now being shown in a new translation by Michael Feingold at Brooklyn’s Theatre for a New Audience. Actually, Mr. Shannon’s role is that of Berenger, the everyman character who appears in several other Ionesco plays, and it is Berenger’s self-assigned task to hunt the killer down.


The play—which flopped quickly when first produced in New York in 1960, starring Hiram Sherman—is theatrically complex, its text filled with countless stage directions and its performance requiring multiple lighting, sound, and scenic effects. Darko Tresnjak, whose production of A GENTLEMAN’S GUIDE TO LOVE AND MURDER is currently wowing Broadway audiences, offers a relatively faithful realization of Ionesco’s intentions, although he doesn’t attempt to replicate all of the playwright’s requirements. He even notes in the program that the company realized early in rehearsals that “It is impossible to honor every single [stage direction] individually. What is important is that all-together they are overwhelming.” What he accomplishes, however, gives a clear enough picture of what Ionesco wanted. The creative staging—employing scenery and costumes by Suttirat Larlarb, lighting by Matthew Richards, and sound by Jane Shaw—ranges from a bare stage fitted with a trap door and two turntables used for treadmill effects, to a naturalistic interior on a moving platform, to extravagant theatricalist touches involving a pair of huge military trucks blocking traffic. And, oh, yes--there’s lots of smoke. Regardless, the play’s verbosity adds so much excess weight that the production eventually sinks, like the killer’s victims, into a lagoon of loquacity.
Michael Shannon. Photo: Gerry Goodstein.


THE KILLER begins with the discovery by Berenger (Mr. Shannon) of a neighborhood in Paris called the Radiant City that is the epitome of human aspirations for a habitat of eternally perfect weather, exquisite architecture, and the perpetual presence of green grass and beautiful flowers. Having found the place by accident, he is given a tour by the Architect (Robert Stanton, quite good in his underplayed casualness), who also is a police commissioner, a doctor, a psychoanalyst, and a sociologist. Berenger, whose own neighborhood is perpetually damp and dingy, is so overwhelmed with the joy he experiences here that he blabbers on and on about it, complimenting the Architect for his creative and technological genius. Meanwhile, the Architect, using a conventional phone receiver in his pocket that, like a modern cell phone, is constantly intruding on the conversation, takes care of his business. The architect’s blonde secretary, Dennie (Stephanie Bunch), arrives and huffily quits her job, even though doing so will somehow put her in danger. Berenger immediately falls in love with her and, even though she completely ignores him, continues to refer to her throughout the play as his fiancée. Something’s rotten in the Radiant City, which is frightening all the residents and keeping them indoors or seeking to depart—a killer is on the loose, averaging three murders a day, the bodies being dumped in a local lagoon. When he learns that Dennie has been slain, Berenger, baffled by the disinterest of the police, determines to find the killer.


Back at his rundown flat, in a building overseen by a comical concierge (Kristine Nielsen), he finds his sickly, white-faced acquaintance Edward (Paul Sparks). Berenger is surprised to discover that Edward and everyone else knows about the killer. He’s even more shocked to see that  Edward’s briefcase is somehow filled with all the things associated with the killer, including his identity card and the photos of a colonel the killer is known to show people before luring them to their deaths. Berenger insists that the hesitant Edward go with him to the authorities, but they realize during their journey that Edward left the briefcase behind. 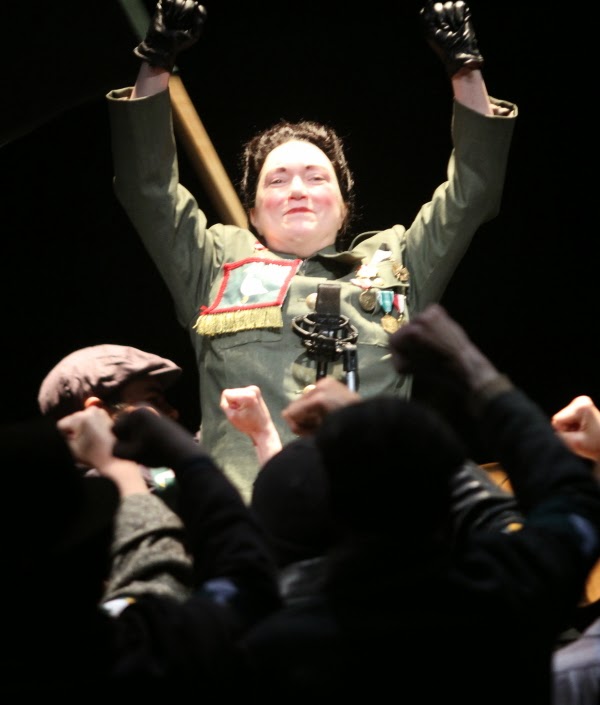 As a huge political demonstration proceeds, supporting an authoritarian leader named Ma Piper (Ms. Nielsen, repeating her familiar eye-popping shtick but still the funniest thing in the show), in charge of the city’s geese, Berenger examines the briefcases of various passersby. A massive traffic jam reveals the police as aggressive bullies more intent on directing traffic than fighting crime. While Edward goes back to retrieve the forgotten briefcase, Berenger trudges on alone. Eventually, he finds himself isolated with the killer (Ryan Quinn), a giggling maniac with whom Berenger tries to reason, offering countless philosophical arguments against killing. In fact, Ionesco wrote of this speech, “Bérenger finds within himself and against his own will, arguments in favor of the killer.” Berenger’s monologue continues for about 20 minutes, interrupted only by the killer’s laughter, and is a tour de force of memory if not necessarily, in this case, of acting genius. Berenger finds himself unable to end the killer’s life and, while the outcome is never made clear, it would seem he falls victim to the murderer’s blade.


THE KILLER, with its typically Ionesco-like mingling of the comic and the horrific, the quotidian and the nightmarish, is difficult enough to relate to on its own; without a Berenger in whom we can recognize our common humanity, productions of the play will find themselves constantly spiraling toward oblivion. The affect of the often wild-eyed Mr. Shannon (who played Berenger in a different production in Chicago 16 years ago) is not that of an everyman; vocally and physically he projects a kind of distanced, almost alienated persona that can, in certain roles, give him an android quality, which is why he succeeds so well as disaffected or evil characters. Costumed with a fedora and long coat that too closely suggest his role on TV’s “Boardwalk Empire,” and with his thick patch of hair seemingly covered in baby powder to age it, he looks anything but a pathetic, naïve yet philosophically inclined Parisian searching for a happiness he’ll never find. He deserves credit for tackling such a difficult part, but very few of the many lines he speaks sound like they’re coming from a real person. And without that reality, even within so broadly theatrical a play, there’s little to connect with apart from Ionesco’s cerebral preoccupations.


The play’s possible political and philosophical meanings (such as the inevitability of death, against which no arguments can prevail and no paradise on earth can outlast) have been discussed by various scholars; thematic concerns aside, some, like Martin Esslin, consider THE KILLER to be Ionesco’s “finest play.” Perhaps on paper it is. But in the theatre, brains can only talk to brains when hearts also speak to hearts. In this production of THE KILLER I never felt my heart being spoken to.

Postscript: I met Ionesco at a conference in Tokyo in 1963. In this picture, he's the bald little man right behind me. I'm in the front row, second from the left. To Ionesco's right is British director John Dexter. 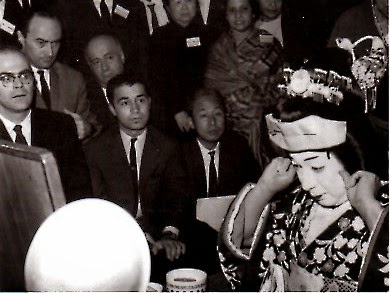