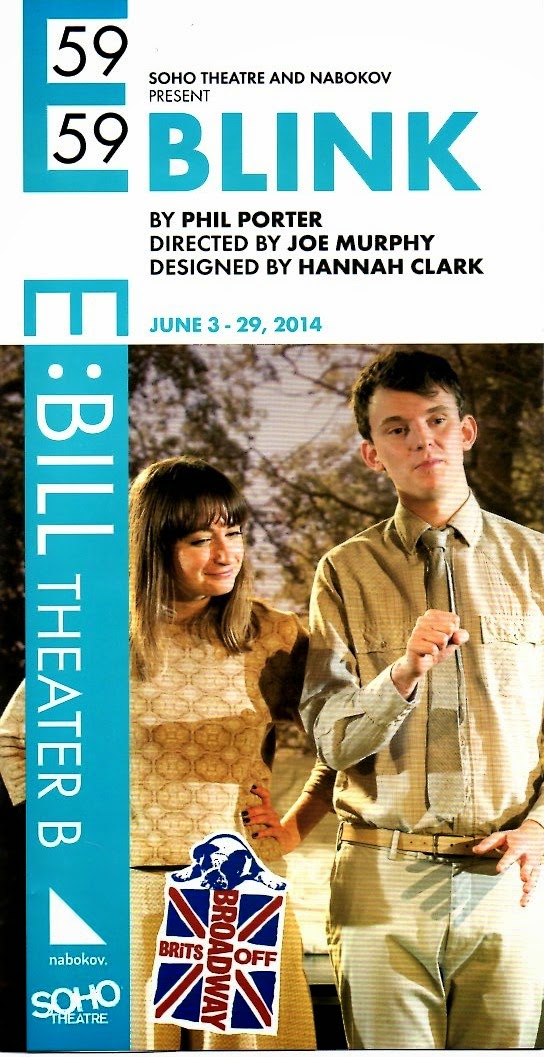 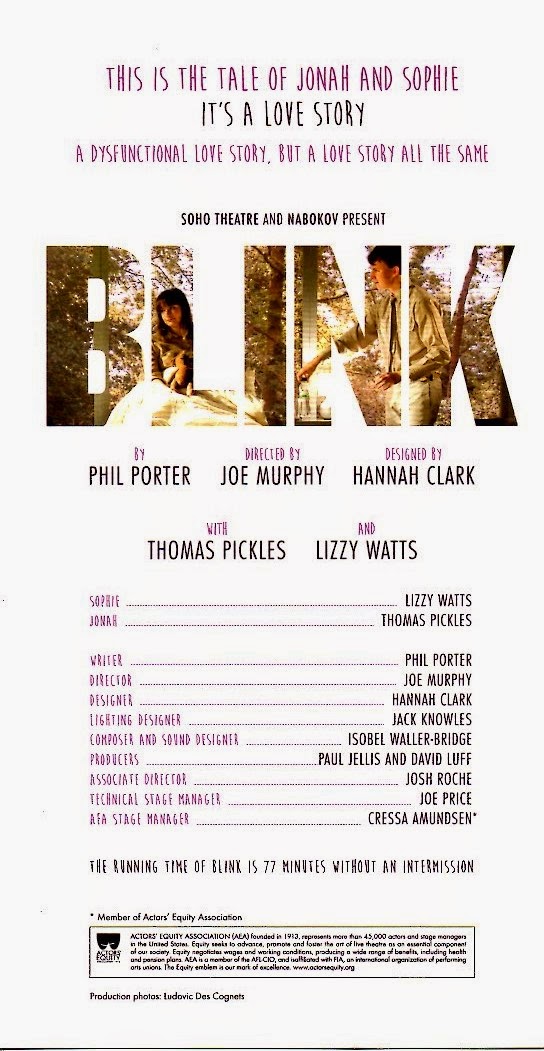 I’m not quite sure what’s implied by the title of this pleasantly diverting, charmingly performed, smartly directed, but lighter-than-air piece of bittersweet romantic fluff. It reminds me, however, of what people often say when passing through a tiny, one-light town, that if you blink you’ll miss it. Phil Porter’s 77-minute two hander, now playing as part of the Brits Off Broadway Festival at 59E59, seems to be about the need for love despite its quicksilver elusiveness; perhaps the idea is vaguely summed up by a line spoken by the male protagonist, Jonah: “Love is whatever you feel it to be.” 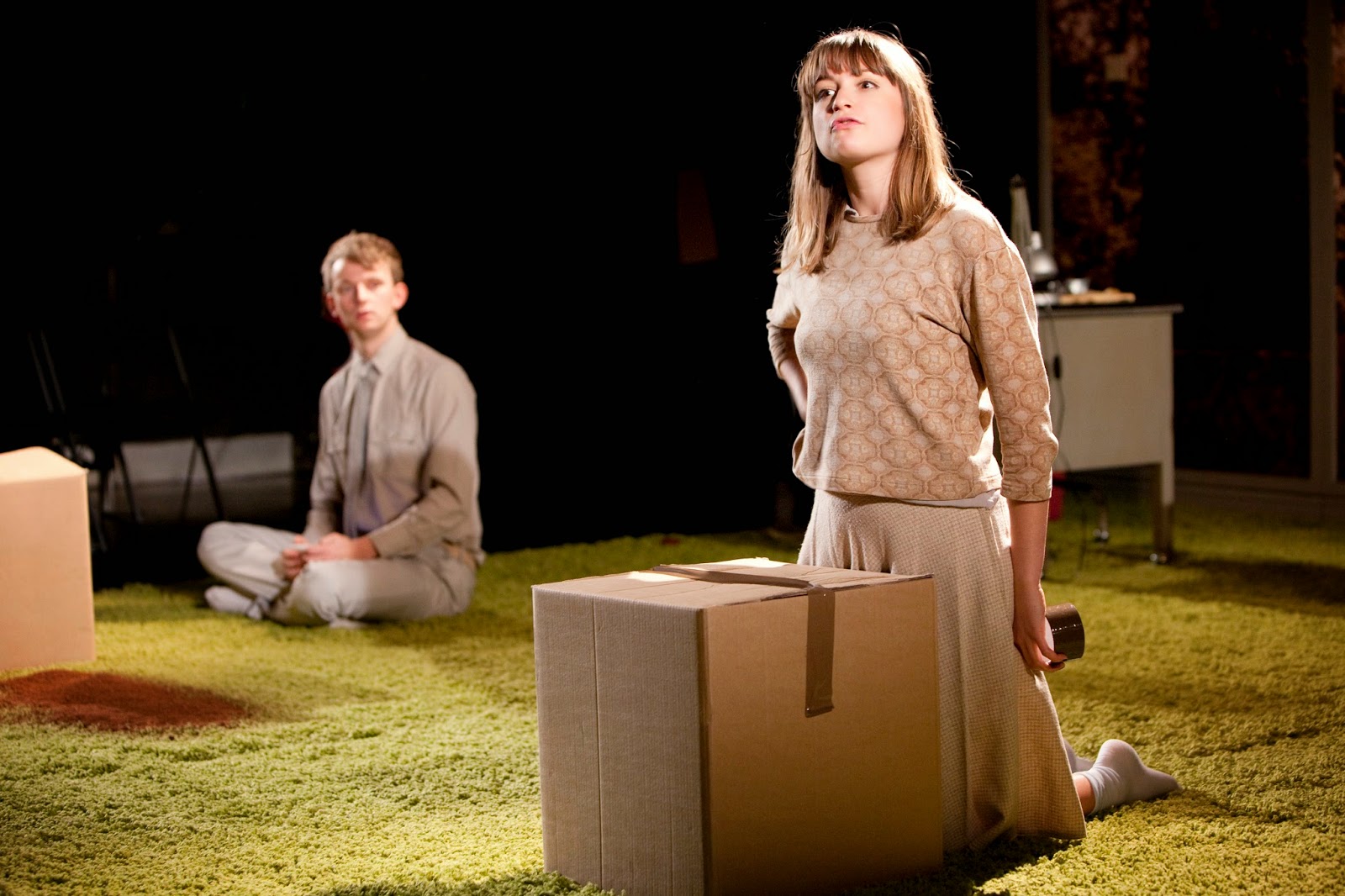 Thomas Pickles, Lizzy Watts. Photo: Ludovic Des Cognets.
Jonah (Thomas Pickles) and Sophie (Lizzie Watts) are sweet young things, living in the same East London residence. She lives upstairs, he down, in the flat formerly occupied by Lizzie’s late, beloved dad. She’s Jonah’s landlady, but the rental arrangements were made without their having met. Each grew up in basically inhospitable circumstances, he in a cult-like religious farming community, she on the isolated Isle of Man, which Sophie describes as “a place known mostly for cats with no tails and motorbikes.” Each is lonely and depressed in London. Jonah survives on a stash of money his mom left for him, buried in the yard, when she died. (The characters are connected by several coincidental things, such as their parents’ deaths from pancreatic cancer, or their having inherited money from these people.)


Sophie is laid off from her job with a software company. Then, in a moment when she admits she wasn’t thinking clearly (“all that happened in a kind of foggy haze”), she mails Jonah a video screen that allows him to watch her when she’s in front of a baby monitor video camera. Having learned that she’s perceived as being somehow “invisible,” this appears to be Sophie’s desperate attempt to certify her own existence. Jonah doesn’t know who he’s watching (a stretch, as you’d think he’d have run into her by now) but becomes so obsessed with his voyeuristic spying that he shares everything she does with her, watching and worrying over the same TV soap opera, for example, or eating at the same time. When she drops a box as he watches, and he hears the bang upstairs, he finally discovers who it is he’s fallen in love with.
Lizzy Watts. Photo: Ludovic Des Cognets.


Jonah begins to follow her everywhere, thinking he’s being unobtrusive, but she’s aware of his stalking presence and slyly encourages it, almost as if it’s a game. They even engage in mini-dates without acknowledging one another’s presence. As things warm up between them, but still without a formal meeting, Sophie begins to feel more visible, but then, on her way to a job interview, she’s hit by a car and is hospitalized with serious injuries and in a coma. Jonah shows up at the hospital and ministers to her every need, faithfully waiting for her to wake up. When she does, he continues to care for her through her rehabilitation struggles until their relationship blossoms into real intimacy, even though it’s he who’s most in love, not she. The melancholy aftermath inspires the vaguely thematic, and not particularly enlightening, sentence quoted earlier: “Love is whatever you feel it to be.”


Mr. Porter’s tale is directed by Joe Murphy in a minimalist visual style (designed by Hannah Clark) reminiscent of certain downtown theatre work, with Jonah and Sophie first seen sitting at desks at either side of a stage covered with green carpeting, suggesting grass. He’s wearing a beige suit, she a beige skirt and top. Each wears pale blue socks with no shoes. Occasionally, for no specific reason, they speak into handheld microphones. Behind them several panels contain blowups of an autumnal forest scene.


Jonah and Sophie share in the telling of the story, all of it delivered in direct address; aside from a few moments of mild byplay, there’s very little direct communication between them, although they’re always aware of each other’s presence; even when talking to one another, the actors usually face the audience. When other characters enter the narrative (a real estate agent, an employer tasked with the job of firing Sophie, the doctor caring for her in the hospital, and a German artist who called the ambulance when she had her accident) Jonah or Sophie speak their lines, altering the manner or tone only slightly, and making no noticeable attempt to clarify if the person whose lines they’re reading is male or female. This is often confusing; if you’re not listening closely you won’t catch 1) the fact that a new character is being introduced, or 2) who that person is. (The stage directions say it’s “all the better” if there’s some confusion.)


Whatever moves the play makes in the direction of being a suspenseful thriller about a compulsive voyeur/stalker and his willing victim are softened by the lightly comic tone and generally positive attitudes of the characters, who never seem as troubled as the situation might suggest. The actors deftly maneuver through this somewhat Brechtian landscape, in which they both embody their characters while gently commenting on them; they speak in what sound like charmingly agreeable provincial accents. There’s great rhythmic precision to their work, and the piece comes across as a kind of chamber play, well conducted under Mr. Murphy’s baton. The writing, though dexterous and accessible, is often digressive, with red herring material interesting to listen to but that goes nowhere, seeming little more than local color added as filler. Examples are the considerable stage time devoted to discussing the soap opera to which Sophie and Jonah are addicted, the material concerning the son of Sophie’s doctor, and the chatter of the German artist about his work. Perhaps some fuller exploration of the causes of their loneliness might be useful; the actors are attractive enough, so their introversion could use more explanation.


BLINK, originally produced by a company called Nabokov at London’s Soho Theatre, is a pleasant enough diversion, largely because of how well the director and his actors have enhanced the writing with their inventive and insightful work.
Posted by Samuel L. Leiter at 8:41 PM