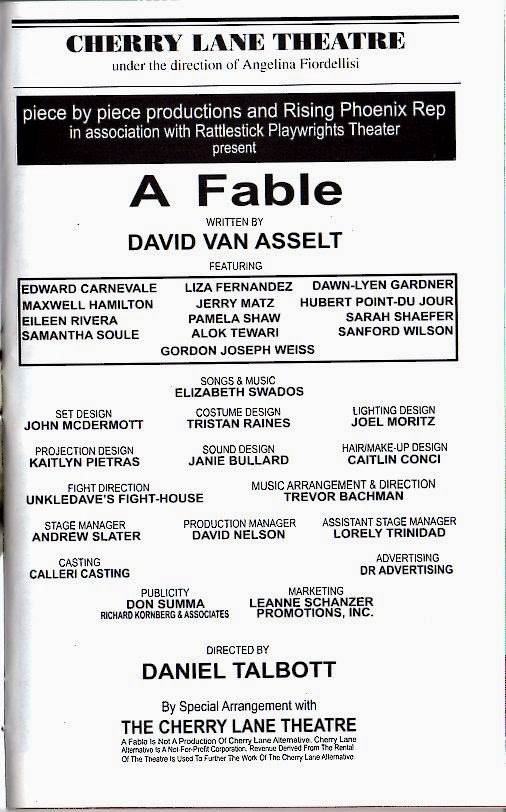 It seems almost useless to write a review of A FABLE, David Van Asselt’s assault on an audience’s patience, whose producers are listed as “piece by piece productions and Rising Phoenix Rep in association with Rattlestick Playwrights Theater.” That last attribution is the giveaway, since Mr. Van Asselt is the artistic director and a co-founder of Rattlestick, one of New York’s most active Off-Broadway nonprofits, which is currently running an excellent piece called THE FEW at its home base on Waverly Place. It’s hard to think of any other well-positioned New York theatre company being interested in this overcooked, unimpressively staged and acted, pretentious piece of pseudo-philosophic playwriting pomposity, which clocks in at nearly two and a half hours and keeps you awake, when it does, only because there’s a whole lot of yelling going on. (My companion chose to sit at the rear for act two, claiming he was getting a headache seated in row D.) Writing a review is practically useless because, judging from the tiny audience present when I saw it, and the tinier one that came back for the second act, A FABLE will soon be forgotten, the way the script itself, in one of its more percipient speeches, suggests we all one day will be. While the latter result may take several generations to occur, A FABLE will probably be banished from your consciousness before you hit the sack. 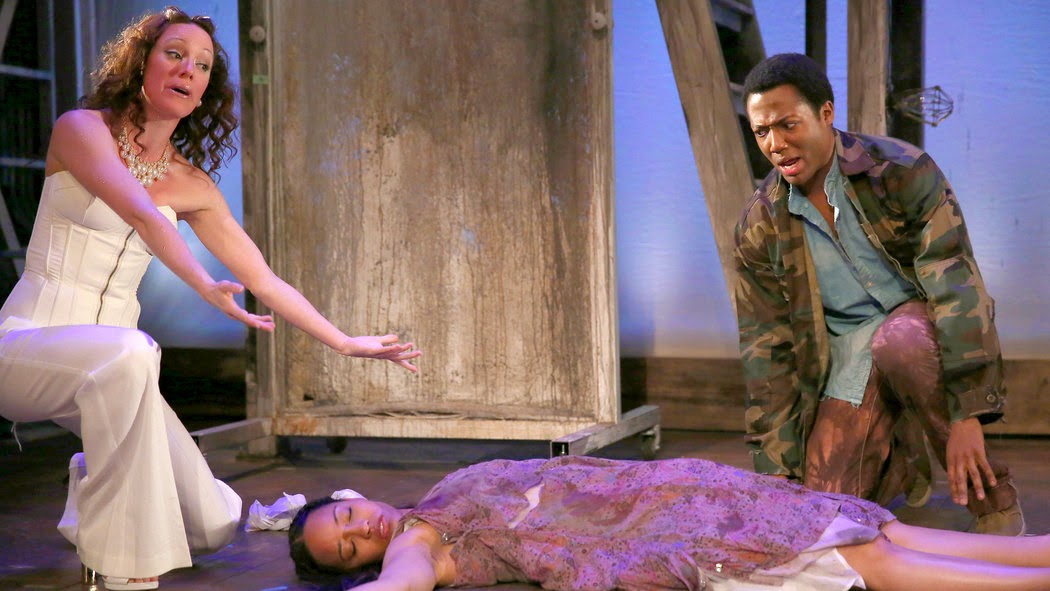 
The shadow of Brecht blankets this piece to the point of smothering it, with political messages about man’s rapaciousness, political crookedness, the ecological destruction of the planet, and man’s cruelty toward his fellow man; songs that interrupt the action to make a moral point (most notably one introduced in classic Brechtian fashion when an actor announces, “The Corruption Song”); names with oriental overtones (like Foo Want and Winwon); and direct address, among other things. Perhaps a modicum of entertainment value in the Brecht-Weill manner might be elicited if the music composed for the relatively few songs was more listenable, but the tunes are so bad you feel at times the actors are making them up as they go along; I was shocked to discover that Liz Swados, once a darling of arty Off Broadway musical work, was the composer. When you add to this potpourri of woes dialogue that includes D.O.A. malapropisms placed in the mouth of a gangster named Rocky Fug, such as “My reputation presents me” and “What are you trying to inseminate?”; GROAN-worthy allegorical character names like Hallie Burton and Senator Fourhire; and a locale set on the fictional island of Tahooty (“Somewhere, almost anywhere, below the equator”), you’ve placed the last nails in a coffin containing a play whose plot has so many tumors it’s a miracle it lived long enough to reach the Cherry Lane stage. 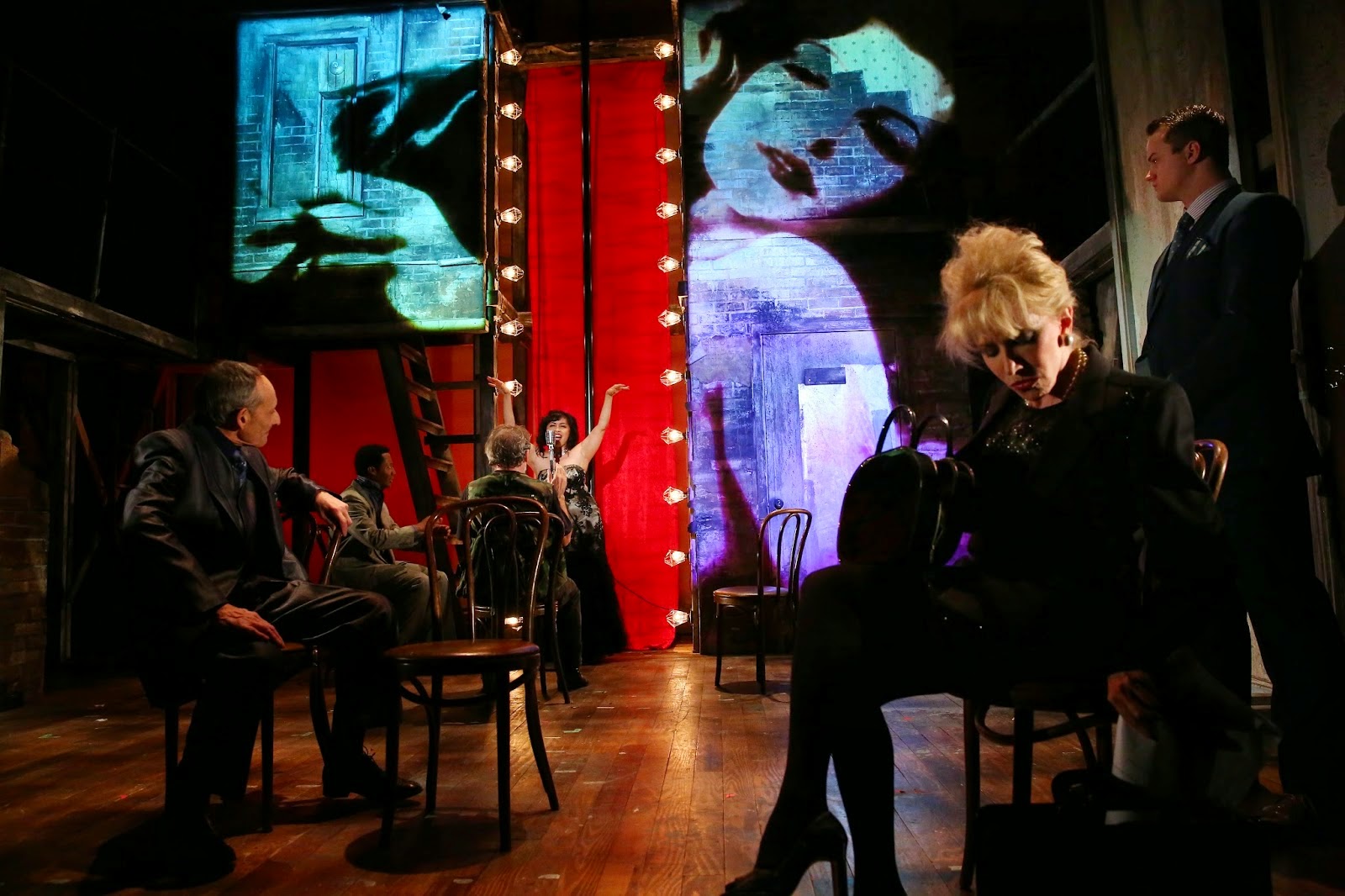 
At the front of a stage filled with three dreary tiers of scaffolding, flats, and panels depicting a rundown environment (designed by John McDermott) lies an aging, white hair and bearded motorcycle-type dude dressed in black, with a headband round his scalp, and looking like a Willie Nelson wannabe. Soon this blathering, cynical, eye-popping, egregiously overacted character arises to serve as something of a narrator. His name is Luke (Gordon Joseph Weiss)—think Lucifer. A band of invading soldiers led by Sgt. Chuckles (Edward Carnevale), fighting for Operation Island Liberation (OIL) on behalf of a corporation known as Beneficent Synthetics (BS for short), rapes a mother (Liza Fernandez) and her daughter, Chandra (Dawn-Lyen Gardner), and pokes out the father’s (Alok Tewari) eye. The soldiers claim the family are rebels, but the soldiers' real purpose is to capture the oil on the family’s farm. One of the soldiers is a hapless fellow named Jonny (Hubert Point-Du Jour), whose soul becomes the object of a duel between the old-buddy heavenly rivals, Luke and Angela (Samantha Soule), a sleek number in tight, white bustier and slacks (later traded for gleaming Spandex), who enters by  sliding down a fireman’s pole. Luke will try to lead Jonny down a path of evil, Angela toward a life of goodness. They exercise their power over events, including the turning on and off of lights, by clapping their hands. Would that one good clap would have turned off the Cherry Lane’s lights for good so we could all have fled toward the streetlights on Commerce Street. There was so much clapping, in fact, that I had none left for the show itself.
Gordon Joseph Weiss, Samantha Soule. Photo: Paula Court.


Chandra’s mom has been killed, but Chandra has survived, and Jonny leaves with her for the capital, where an aunt (Eileen Rivera) and uncle (Jerry Matz) promise to care for her, but where she becomes the household drudge. Too many completely uninteresting events follow, including Jonny’s becoming a wolf of Tahooty’s Wall Street, or whatever its stock market is called. Jonny leaves Chandra behind while he goes off in search of her one-eyed dad, whom he eventually finds and kills, poking out his other eye, when the father, given a gun by Luke, attempts to shoot him. Luke and Angela, you see, not only follow their heros' adventures, but actually interfere in their lives, even becoming characters in the action. Mr. Asselt’s fable introduces a Soprano-like gangster named Rocky Fug (Mr. Carnevale); his henchman Biff (Maxwell Hamilton), in love with Chandra; the corrupt Senator Fourhire (Mr. Matz); Hallie Burton, a bleached blonde corporate executive (Pamela Shaw) in body-hugging black; a singing (shouting, actually) punk rocker-like actress named Cherry Works (Ms. Shaw), with frizzed hair, miniskirt, and torn mesh stockings (Ms. Shaw); a flatulent homeless woman (Ms. Fernandez); the wealthy businesswoman Foo Want (Ms. Fernandez) who’s forced by Rocky to run for office against Jonny; and other expired ingredients from an overstuffed dramatist’s recipe book. Jonny’s mixed up with all these cartoonish creatures, of course, and even runs for president with a platform designed to clean up the island’s corruption.


I’d quote some of the lifeless gags and dreadful dialogue, but you’d probably think I made them up myself. The direction by Daniel Talbott is all over the place, with no clear through line (except to get the damned thing over with and move on to his next show), and the cast, despite some decent talents, is valiant but totally unable to breathe life into this sodden slog. Mr. McDermott’s unsightly set, which requires the hardworking company to slide tall panels around into different configurations, is enhanced by lots of projections (courtesy of Kaitlyn Pietras), including video clips. As for the lighting . . . well, there’s plenty of it, except during the curtain calls when—perhaps to save the cast from embarrassment—the lights are so dim you have to squint to make out the faces. There’s not much to write home about in Tristan Raines’s costumes, except that there are a lot of them and the actors make their fast changes smoothly. Janie Bullard’s sound design offers an abundance of effects and does what it can to keep our ears engaged when the actors aren’t outshouting one another.


As my cousin Fred points out, without a top there can be no bottom. And A FABLE is definitely a bottom.
Posted by Samuel L. Leiter at 11:49 AM