28. MUCH ADO ABOUT NOTHING 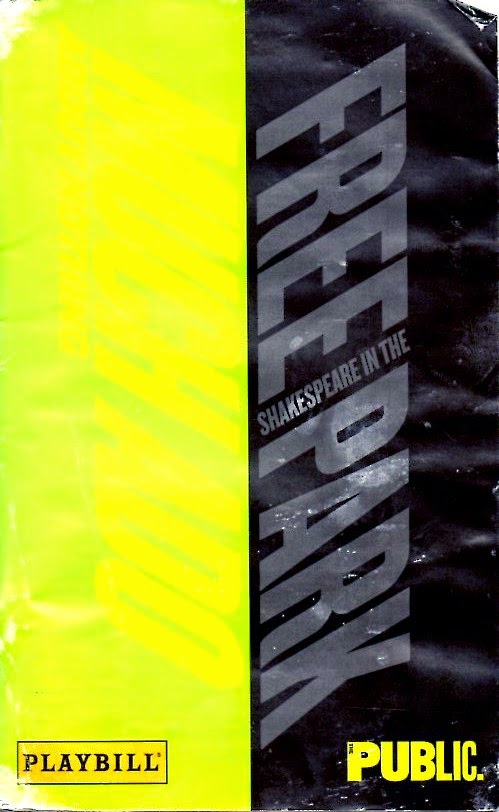 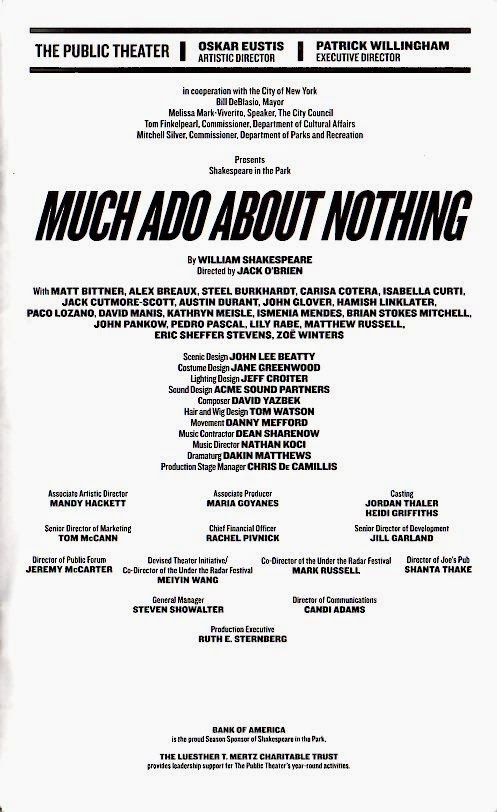 Please see post #25, Seeing in the Rain, for a description of what attending this production on a rainy night was like. More photos of the show can be found there as well.﻿
The new Shakespeare in the Park revival of MUCH ADO ABOUT NOTHING, Shakespeare’s somewhat shaded high comedy, is much ado about something, a sweet and uncluttered, crystal clear and lovingly crafted, zestily acted and elegantly directed revival that continues the Delacorte Theatre's string of successes with this play. Over the years Beatrice and Benedick have bickered and bussed in the persons of J. D. Cannon and Nan Martin (1961), Sam Waterston and Kathleen Widdoes (1972), Blythe Danner and Kevin Kline (1988), Jimmy Smits and Kristen Johnston (2004), and now, Hamish Linklater and Lily Rabe. The most memorable was the Waterston-Widdoes version, with its turn of the 20th-century Teddy Roosevelt period ambiance, which moved to Broadway and was both filmed and televised. Apart from the Cannon-Martin production, the Delacorte’s stagings of MUCH ADO ABOUT NOTHING have all been moved to more recent times, either in the 19th or 20th centuries. MUCH ADO, in fact, is one of the most frequently transmogrified of Shakespeare’s plays.


The current staging, under the guidance of Jack O’Brien, making his Shakespeare in the Park debut on the cusp of his 75th birthday, is several lengths ahead of the 2013 revival by Theatre for a New Audience, starring Maggie Siff and Jonathan Cake. Like that version, it places the action very definitely in Messina, Sicily, near the turn of the 20th century; in fact, its opening moments, and several in the midst of the play proper, are spoken in Italian (added, not translated from Shakespeare). The production captures both the romantic qualities of Shakespeare’s text and the darker lining within a plot that suddenly turns bleak when what should have been the joyous wedding of the beautiful young couple, Hero (Ismenia Mendez, not to be confused with Idina Menzel!) and Claudio (Jack Cutmore-Scott), falls apart as Claudio, because of a nefarious plot concocted by the reptilian Don John (Pedro Pascal), brings it crashing to the ground. But, of course, joy returns to Messina when the doggedly foolish constable, Dogberry (John Pankow), apprehends the guilty parties, insisting as well that it be noted by all that he has been called by them “an ass.” The play's high comedy scenes are now and then pushed into the realm of farce, which should be the job of the Dogberry segments, but at least never too far to distract from the proper comedic tone.
Steel Burkhardt, Hamish Linklater. Photo: Joan Marcus.


Jane Greenwood’s lovely costumes, especially those for the women, and John Lee Beatty’s substantial set, representing the exterior (and gardens) of Leonato’s (John Glover) villa, supplemented by Jeff Croiter’s atmospheric lighting continue the Delacorte’s tradition of exquisite visuals, with an accent on the literal creation of a time and place. Abstract or neutral Shakespearean settings have rarely been part of the Delacorte aesthetic. Also contributing are delightful music composed by David Yazbek, creative sound design by Acme Sound Partners, and smoothly choreographed dances by Danny Mefford.

Act two begins with the sounds, lights, and activity of a powerful thunderstorm. Experiencing these effects on a night when the preshow skies erupted, threatening the performance, made many reach for their umbrellas before realizing it was all make believe and settling back for the remainder of this enjoyably acted romp, which made the misty moon shine even brighter. 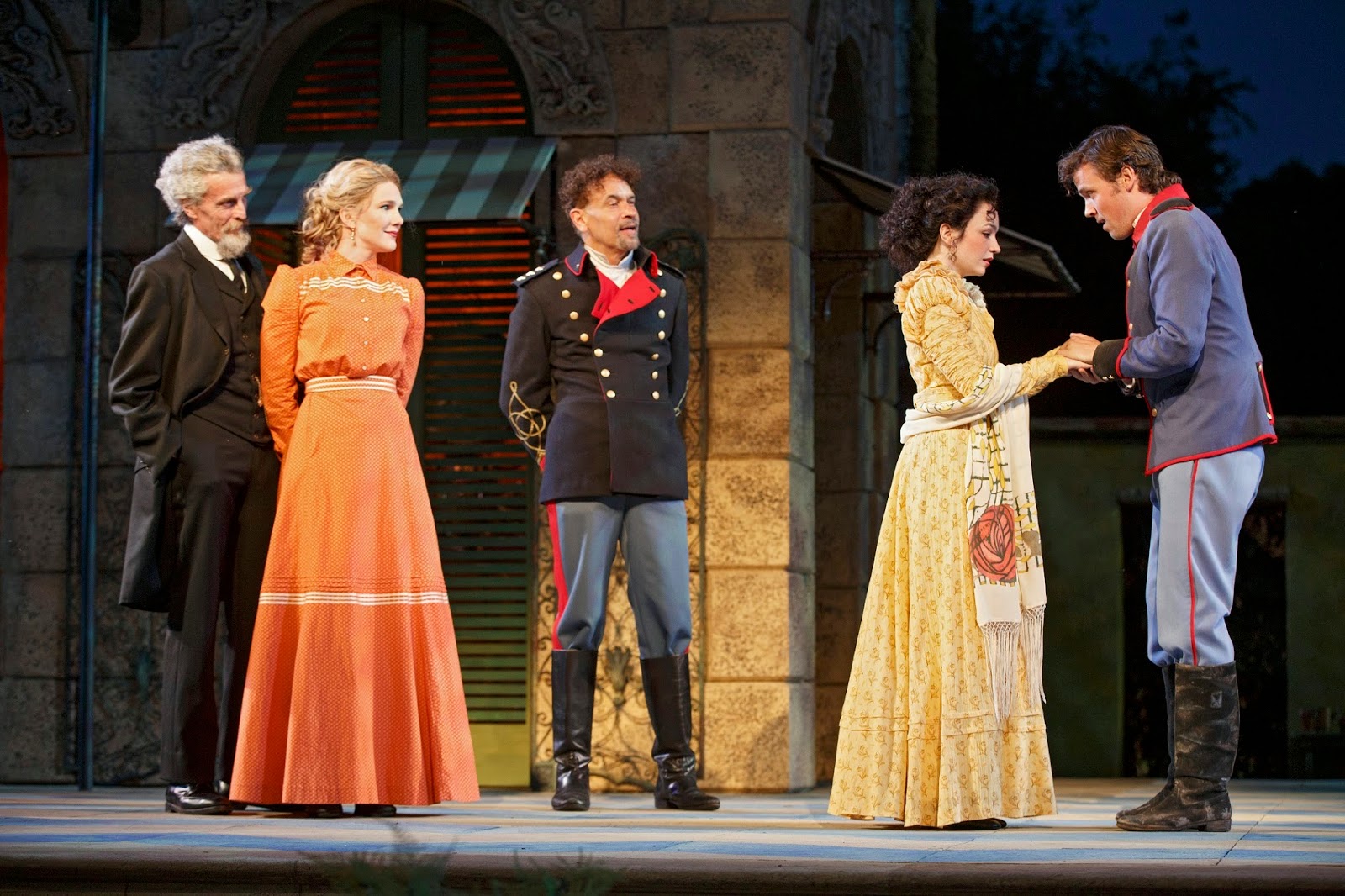 From left: John Glover, Lily Rabe, Brian Stokes Mitchell, Ismenia Rabe, Jack Cutmore-Scott. Photo: Joan Marcus.
In Mr. Linklater and Ms. Rabe, the production has youthful, intelligent, amusing, and truthful romantic leads. Watching Benedick and Beatrice work out their love-hate, I-can-say-anything-nastier-than-you relationship, is always fun when they’re played by first-rate thespians; Mr. Linklater and Ms. Rabe can be as sassy, sarcastic, and snotty as the best, but also as convincingly, if surreptitiously, hot for each other as they must be if we’re to love them the way they love each other. Mr. Linklater brings his very personable, down to earth honesty to Benedick, making him conceited and humble, serious and farcical. He demonstrates considerable physical dexterity when scaling a wall or performing a sprightly dance, and he speaks his lines effortlessly, making his jibes hit both your funny bone and your brain. Ms. Rabe, whose decisive manner and razor-sharp verbal skills, not to mention her impressive vocal power, bring to mind Cate Blanchett, once again displays the acting chops that make her one of our finest young Shakespeareans. Some may feel that Mr. Linklater and Ms. Rabe are too familiarly modern and insufficiently elegant in the high comedy mode; for me, this was not as important as their ability to make their roles seem real and recognizably human. 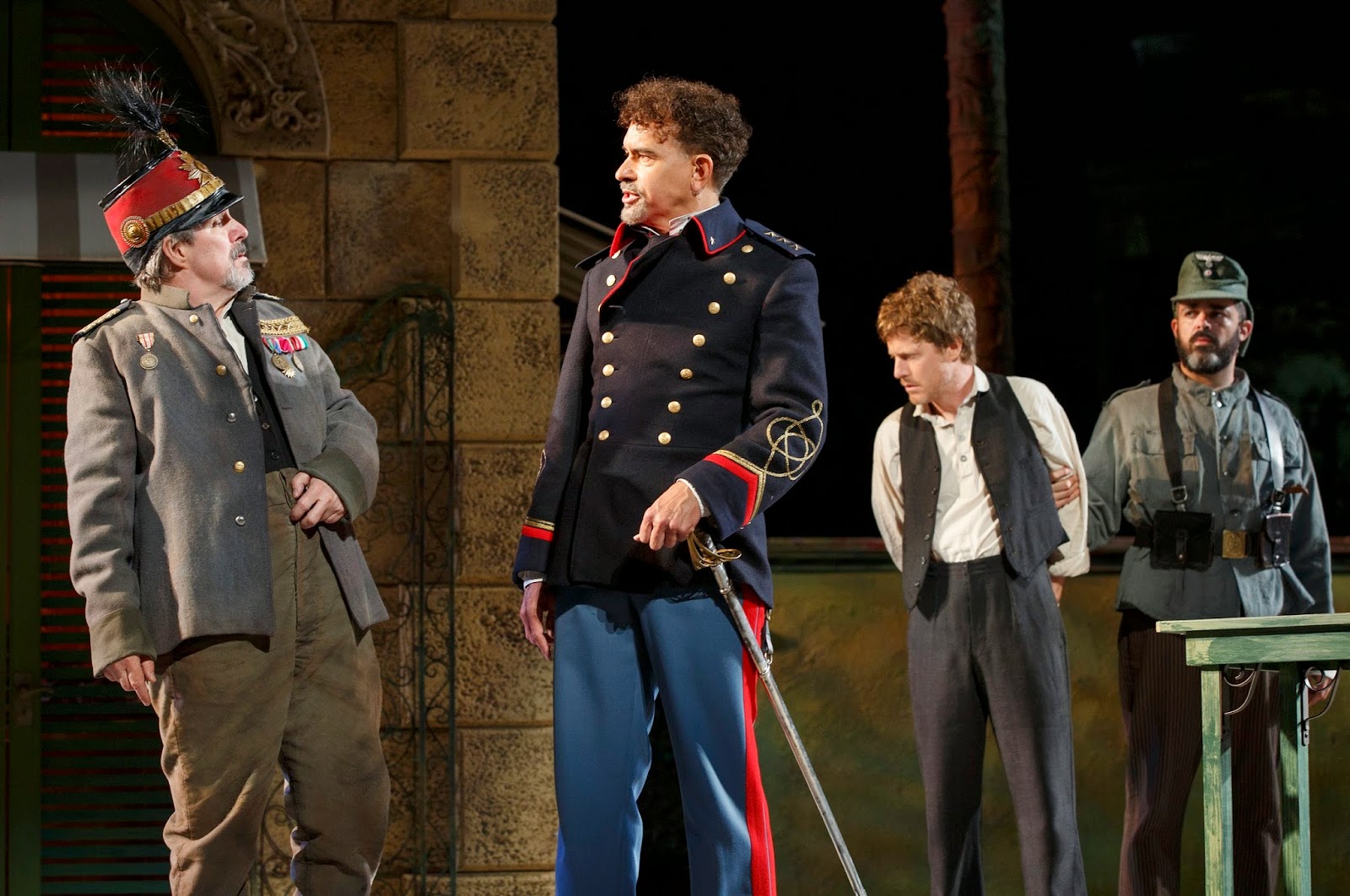 John Pankow, Brian Stokes Mitchell, Eric Sheffer Stevens, Paco Lozano. Photo: Joan Marcus.
The supporting cast includes Mr. Glover as a saturnine Leonato (isn’t John Glover always saturnine?), dressed in black with goatee and thick white hair pulled back from a widow’s peak, both fiery and forgiving, while Broadway musical star Brian Stokes Mitchell handles Don Pedro, Benedick’s commanding officer, with sophisticated aplomb, even using his famous musical talents in a couple of singing sequences. Ms. Mendes is a pretty and spunky Hero, Leonato’s daughter, unjustly accused of “lasciviousness” just as she’s about to marry Claudio. As Dogberry, Mr. Pankow is the John Pankow you’ve either come to love or hate when he’s doing his loud, over-the-top, comic thing, as in his Merc Lapidus on TV’s “Episodes”; he’s often hilarious spouting Dogberry’s pre-Mrs. Malaprop malapropisms, but his manic mugging could use a stronger tug on his leash. A few other actors also are guilty of shouting too much as a substitute for humor, one of them being Zoë Winters (late of AN OCTOROON) as Margaret, Hero’s waiting-gentlewoman, who becomes an inadvertent tool in Don John’s plot. Everyone else offers perfectly acceptable and well spoken characterizations that make this an enchanting revival and, even without all the rain, another high-water mark in the Delacorte’s fabled history. 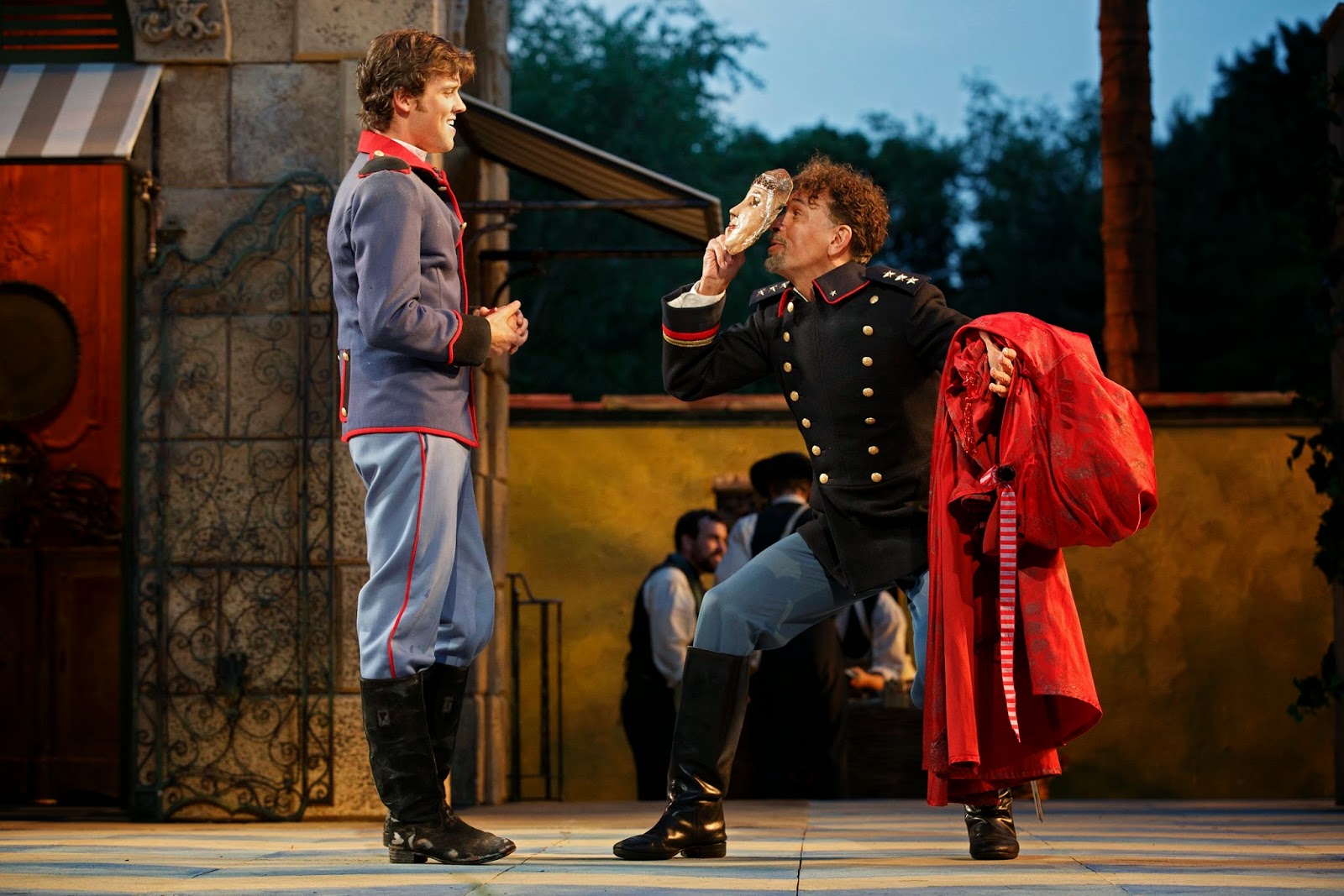 Jack Cutmore-Scott, Brian Stokes Mitchell. Photo: Joan Marcus.
Note: Although performances are miked, Shakespeare in the Park offers assisted listening devices to those who need them.﻿
Posted by Samuel L. Leiter at 5:50 AM