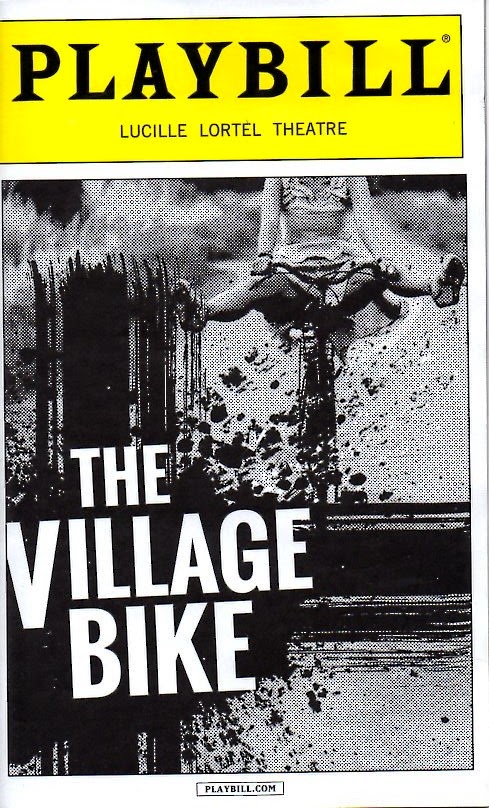 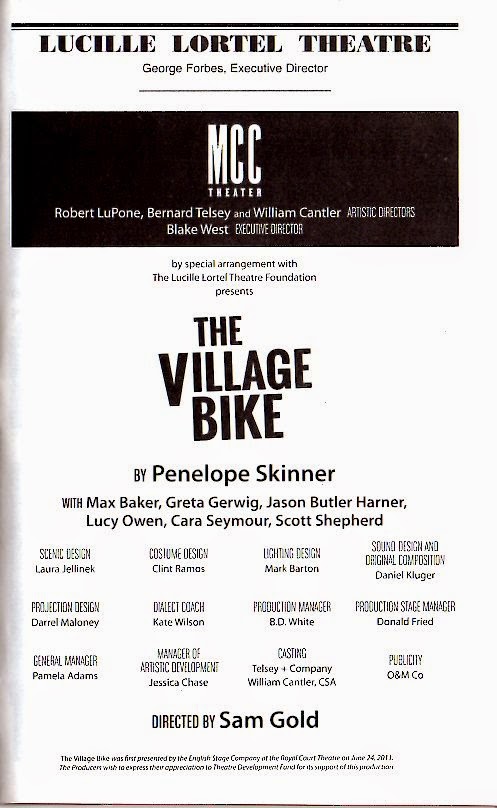 Penelope Skinner’s THE VILLAGE BIKE, playing at the Lucille Lortel Theatre in an MCC production, is a seriocomic British import about sexual desire, sexual dysfunction, and sexual depression in the lives of a married couple in their early 30s. John (Jason Butler Harner), who directs TV commercials, and Becky (Greta Gerwig in the role created in London by Romola Garai), a teacher, have moved to a cottage in middle England, where they hope to enjoy the rural life. It’s summer, there’s a heat wave, and Becky’s newly pregnant. John is so obsessive about making sure no complications muddle Becky’s pregnancy that he buries himself in books about prenatal care and refuses to have sex for fear of somehow damaging the fetus. He’s also the kind of tree hugger who obsesses about organic versus mass produced food, and is loudly outspoken about his feelings regarding a local Tesco (a British supermarket chain) and the use of plastic bags. 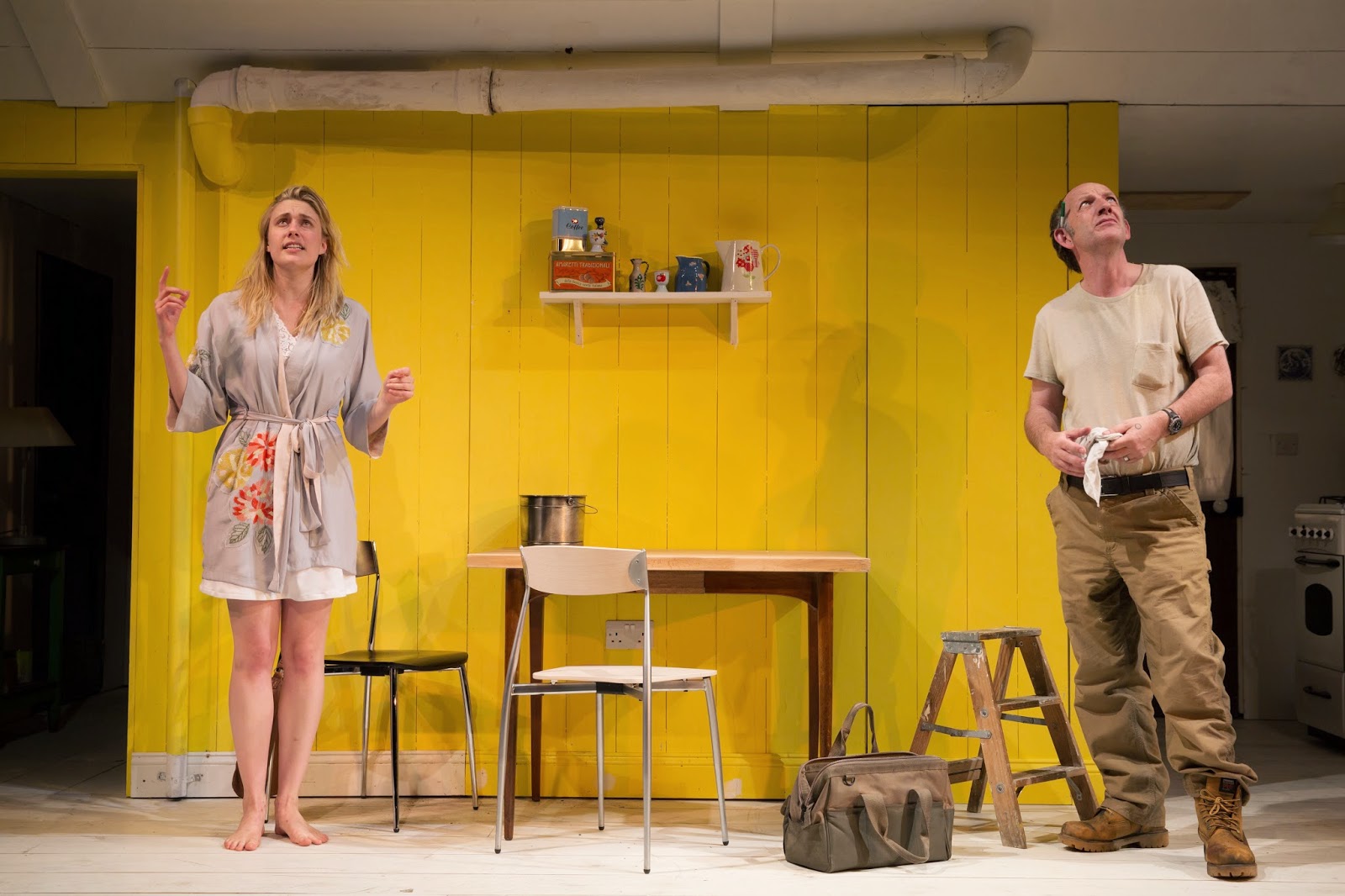 
Becky’s hormonal changes, however, seem to be making her both very insecure about her appearance (no reason to fear there, of course) and ever hungrier for sex, so the play’s first act has fun with the idea of a good-looking, horny woman, desperate for pleasurable, non-procreative hanky panky, faced by a husband who, for all his protestations of love, is unwilling to engage in any form of sexual activity whatsoever. (In OUR NEW GIRL, which I saw the next day, a husband comes home to his pregnant wife bursting with lust, but she’s not quite as interested. And female hormones once more enter the conversation.) When Becky begs him to “go down on” her (her words), he refuses because the idea of doing this so close to the baby repels him. “What if it’s a girl? What if it’s a boy?” he asks. “John. It’s in my womb. Not my vagina,” she answers, getting a big laugh. Conveniently, John has to go to Amsterdam on a job assignment for a couple of days, so Becky finds herself alone with an attractive married man named Oliver Hardcastle (Scott Shepherd), who sells her a bicycle. The bike needs some repairs, Oliver’s wife—to whom he insists he’s committed—is away for the month on one of her “jaunties,” one thing leads to another, and soon a hot and heavy affair is under way, although to Oliver just “fucking” doesn’t qualify as an affair.


Despite John’s erotic disinclinations, this is not exactly NO SEX PLEASE, WE’RE BRITISH. While act one plays largely like a sex farce, particularly with regard to the switch in our usual expectations by showing the pregnant woman having a perpetual hard on, so to speak, and the man doing all he can to counter any moves that might in that way lie, it also offers frank observations about sexual attitudes. There’s a sense that Becky’s passions are not simply a passing phenomenon, and that something deeper is at stake. During act two, her inability to control her desires gets so out of hand that we realize this woman’s psychological issues are far more extreme than we first thought. A feeling of dread invades the stage, especially during the scene breaks as ominous music and sounds (kudos to Daniel Kluger) play while vaguely threatening shadows race across the background. There are also film clips of Becky, for whom riding her new bike is a form of freedom and release, projected across the rear wall; as the play proceeds, the close-ups of Becky’s face show it looking something like a cross between orgasmic and frightened.
Scott Shepherd, Greta Gerwig. Photo: Matthew Murphy.


Although THE VILLAGE BIKE (which means the village slut) is well played, and Ms. Gerwig, the rising indie movie star (FRANCES HA, etc.), is extremely good in her Off-Broadway debut, making Becky’s vulnerabilities totally credible, the play itself has an unsteady tone that prevents you from knowing exactly how to respond to it. Even in the midst of Becky’s breakdown, for example, John has an extended comical rant against Tescos that fully demonstrates how priggish and out-of-touch he is. His hands-off behavior toward his desperately needy wife seems unreasonably strained, especially given all the other concessions to her moods he’s willing to make. He says he’ll resume having sex with her after she gives birth, but his disinterest seems too mechanical and unlikely, regardless of his fears for the baby. Becky is, after all, not even showing, and, with the pretty Greta Gerwig playing her, one even begins to wonder if John’s gay, although the subject never arises.


According to the script, there are three locales, but these seem to have presented technical problems for director Sam Gold and designer Laura Jellinek. Act one takes place entirely in John and Becky’s cottage, which, as the unpainted, spackle-plastered sheetrock show, is undergoing renovations. Act two shifts back and forth between John and Becky’s place and that of Oliver and his wife, Alice (the strikingly svelte Lucy Owen). A very brief, final scene is at Mike’s home, described by the playwright as “small and shit.” In act one, John and Becky’s home occupies the center and stage right areas, with the kitchen and door to the outside upstage and the dining area, with exposed pipes overhead, at right. Instead of having the couple’s bedroom upstairs, as in the script, the low Lortel ceiling has forced the bedroom to occupy stage left, which is acceptable. But between the acts, a massive rearrangement of the space (worth watching, by the way) takes place in which the elements of the home are spread around the stage, with the bedroom moved to stage right, the kitchen remaining upstage but parallel to the audience rather than at a right angle, and the dining area and pipes shifted to stage left. At center, and under the same spreading roof as John and Becky’s domicile, is a large couch placed under a chandelier to represent Oliver and Alice’s place. Thus we're in the world of simultaneous settings, with multiple locales on view. The final scene takes place on Oliver and Alice's couch, but we’re supposed to accept it as Mike’s home.

The concept is confusing and ineffective, drawing too much attention to itself. Since this isn’t a play about scenery, a less physically elaborate and more flexible arrangement might better have been employed. Similarly confusing is Becky’s costume in the later scenes, where she’s dressed in the sexy nightie she bought earlier to arouse John’s libido. She wears it in her last scene with Mike, making no attempt to disguise it when Jennie enters unannounced, nor does Jennie seem to note it. Becky keeps it on when she soon appears in Oliver’s home for a conversation with Alice. Since everything else is completely realistic, this unexplained effect is either a weird oversight or an intentional, although jarring, insertion of surrealism.


There’s much in Ms. Skinner’s play to appreciate, from the performances, especially Ms. Gerwig’s, to the frank sexual palaver and behavior, to the depiction of Becky’s psychological breakdown. But the dramatic road has too many tonal potholes and you should check your chain before you take a ride on THE VILLAGE BIKE.