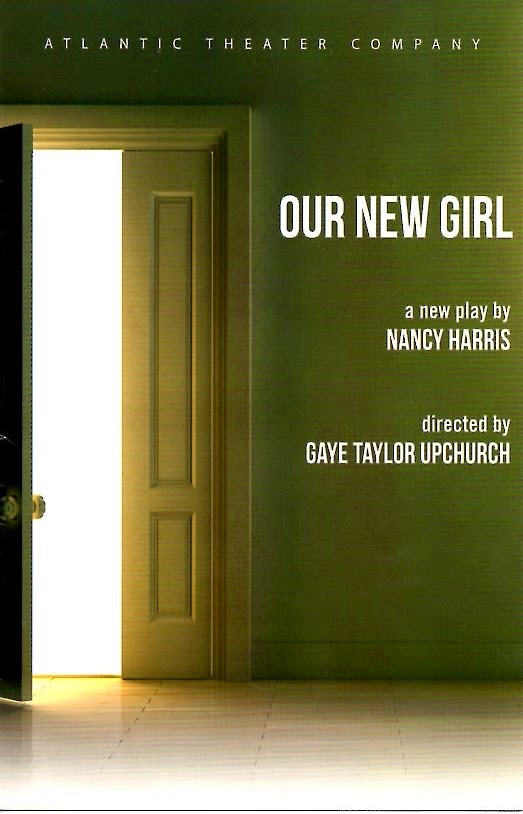 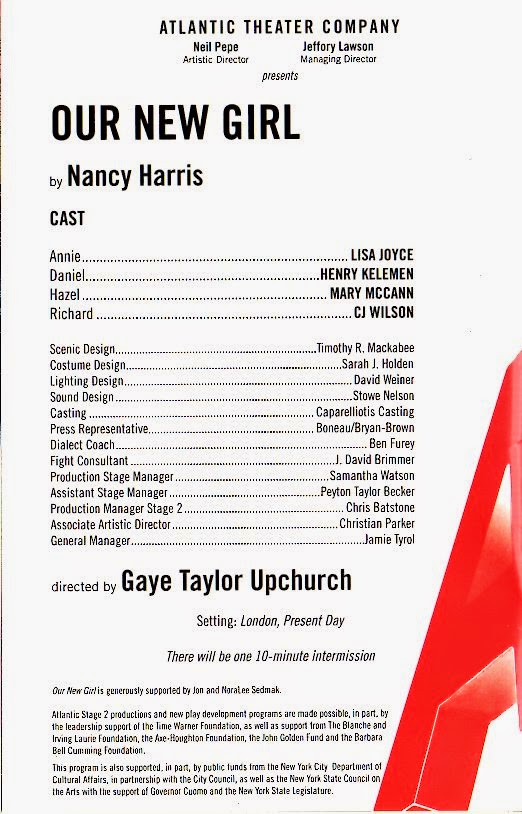 The gripping opening of OUR NEW GIRL, Irish playwright Nancy Harris’s exploration of family life among London’s would-be have-it-allers, which first appeared at London’s Bush Theatre and is now at the Atlantic Theatre’s Stage Two, shows an 8-year-old British boy, Daniel (Henry Kelemen), sneaking into the kitchen in the dark, examining his right ear in a mirror, dabbing the ear with some kind of liquid, climbing on a chair to remove a large knife from the wall, returning to the mirror, and preparing to cut off the ear. Blackout. The scene is a framing device to which the play will return at the end; the action proper is an account of the weeks leading up to that Van Gogh-like situation.


As in THE VILLAGE BIKE, which I’d seen the night before, a principal character is a pregnant woman, Hazel (Mary McCann), much further gone than Becky, the other play’s protagonist. Hazel, who left her high-level position at a law firm to be a stay-at-home mom, a job she’s finding very stressful, is married to a handsome plastic surgeon, Richard (CJ Wilson), who, despite a flourishing practice making women prettier, prefers to do humanitarian work repairing the ruined flesh of natural disaster victims. While Richard is off on a post-earthquake mission to Haiti, Hazel is suddenly confronted by a pretty young Irishwoman, Annie (Lisa Joyce), hired by Richard as a nanny without having consulted with his wife. Despite her aggressive efforts to send Annie packing, the complexities of the situation force Hazel to keep her on, and Annie—a poor farm girl with a hidden resentment of affluent Brits like Hazel and Richard, and equipped with an agenda of her own—soon bonds with young Daniel, an extremely bright child with a streak of the bad seed in him that makes him very difficult for the frazzled Hazel to handle. Thinking it will help him learn to take responsibility, she allows him to own a tarantula, which will figure in a key scene, although not the way you might imagine. Hazel has recently begun a home based business selling olive oil supplied by a woman named Alessandra she met in Sicily (and whose ability to raise a large family and run a business Hazel idolizes), but she’s been receiving too much stock, the house is filling up with boxes of olive oil, she’s been unable to reach Alessandra, and, what with Daniel’s odd misbehavior and the presence of the unwanted Annie, Hazel’s at her wit’s end.
CJ Wilson, Mary McCann, Lisa Joyce, Henry Kelemen. Photo: Kevin Thomas Garcia.


Richard comes home, looking in his safari jacket like a TV correspondent, and inserts his own brand of parental philosophy into a situation that Hazel would prefer to handle on her own, especially since she feels Daniel needs stricter discipline and the self-important Richard prefers an attitude that suggests that anything wrong the boy has done can easily be explained and resolved. Ms. Harris’s play delves very cleverly into the parenting conflict, which also hints at a clash of egos between Hazel and Richard (the tarantula looms large here). Since their arguments are mostly played out in front of Daniel, it’s hard not to wonder what damage this will have on his psyche. The conflict also occurs with Annie present, and whenever an argument (usually conducted with tense civility) comes to a climax, Richard turns to Annie, in whom he senses a kindred spirit, for her opinion. You can practically hear Hazel’s insides boiling.
Lisa Joyce, CJ Wilson, Mary McCann, Henry Kelemen. Photo: Kevin Thomas Garcia.
Annie seems a caring maternal presence when dealing with Daniel, in contrast to the more intense and high strung Hazel (who recoils when Daniel, who had just jabbed his mother there, tries to gently touch her belly), but when Annie finds herself alone with Richard, she asks him to examine a serious scar on her torso, setting up a compromising situation secretly observed by someone else.


Eventually, there’s a confrontation about the incident and a forcible denunciation by Richard and Annie, who turn on Daniel for being a liar, with everything Richard has thus far said about truthfulness being subverted. There’s also a flare-up during which Richard reviles his wife for having been unable to maintain a career while raising a family, blind to the fact that his flying off to every godforsaken place to care for others, and the inflated egoism this gives him, is contributing to his own family’s destruction. To say more would be to give away too much, but the play’s examination of self-saving mendacity in the context of approaches to child-raising is strong stuff.


Despite some sharp dramatic scenes and psychologically complex characters, the play isn’t always convincing. Hazel’s rejection of Annie seems forced, especially after we learn that Richard hired her when, overwhelmed with her responsibilities, she texted him asking for help. Upset as she was, she could at least have waited for Richard’s return to sort things out, especially given the trouble it took the girl to get there from Sligo, Ireland. And Richard’s having hired Annie, based purely on online negotiations, seems unlikely, given that most people in such situations would at least have requested an interview first. Moreover, his failure to consult with or even contact his wife about the nanny is not very plausible. On the other hand, he’s so consumed with himself perhaps he shouldn’t be held to more reasonable standards.
Lisa Joyce, CJ Wilson. Photo: Kevin Thomas Garcia.


Gayle Taylor Upchurch’s staging, with an American cast sounding appropriately British and Irish, is set in a sleekly sterile kitchen designed by Timothy R. Mackabee. Portentous music and sounds (designed by Stowe Nelson), some of it with a faintly Irish quality, ties many of the scenes together, and the costumes. designed by Sarah J. Holden, are all true to the characters. Mary McCann offers a solid, beautifully nuanced performance as Hazel, capturing the complexities of a frustrated, loving, but emotionally confused mother who can’t connect with her son, and a lawyerly argumentative wife who finds herself on the opposite side of a parenting divide. Mr. Wilson succeeds as the unsympathetic Richard, making him a blustering egoist who always thinks he know best. Ms. Joyce is quite convincing as the Irish nanny, but her thick dialect and rapid speech are sometimes impenetrable. The 10-year-old Henry Kelemen, as Daniel, is very cute and has a tiny, squeaky voice, but the character’s alienation makes him seem more robotic than troubled. One wonders how much the contents of a play like this rub off on a child actor. Hopefully, he gets better parenting than the boy he plays.