30. WHEN WE WERE YOUNG AND UNAFRAID 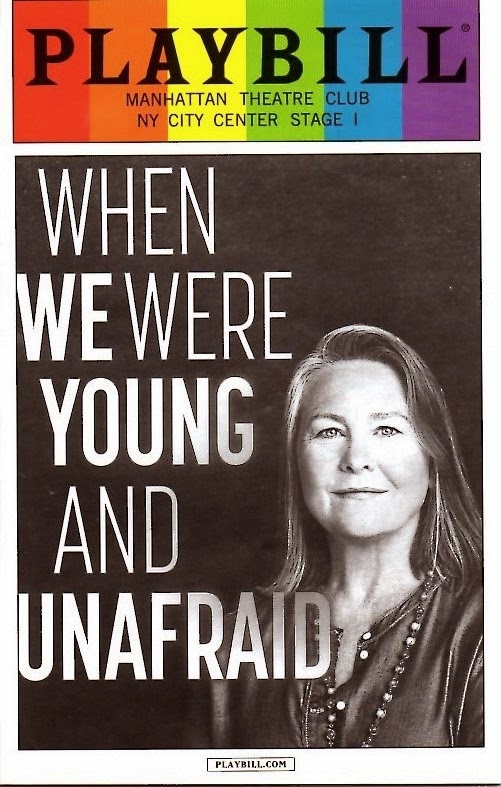 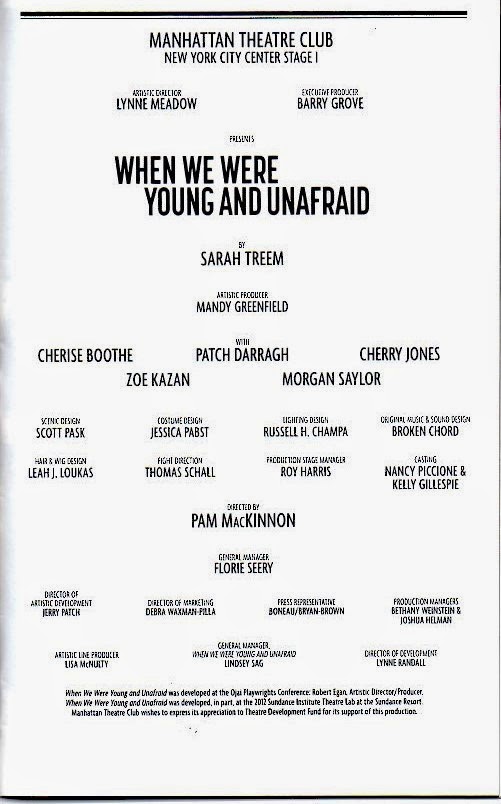 Twenty-year-old Morgan Saylor, who plays Nicholas Brody’s daughter, Dana, on TV’s “Homeland,” is making a smashing Off Broadway debut in Sarah Treem’s mildly provocative, often enjoyable, but rather uneven new play, WHEN WE WERE YOUNG AND UNAFRAID. The production, given at the Manhattan Theatre Club’s City Center venue, offers several outstanding performances, particularly from Cherry Jones and Zoe Kazan, and is smartly directed by Pam McKinnon, but good acting and direction can’t prevent Ms. Treem’s play, which deals with feminist issues, from either its soap opera or soap box tendencies. 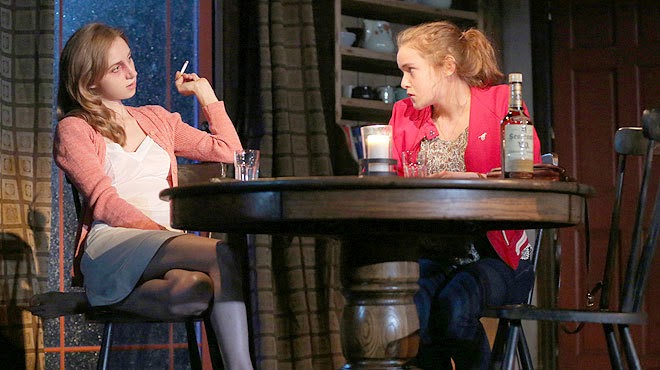 
It’s 1972, a year before Roe vs. Wade became law. Agnes (Ms. Jones) is a determined, middle-aged, single woman; she’s a former nurse whose license was revoked because she performed abortions. Agnes runs a bed and breakfast on an island off the coast of Seattle, where she also harbors at least two or three battered women each year. Her main help is the studious16-year-old Penny (Ms. Saylor), presumably her daughter, although Penny calls Agnes by her given name. Agnes wants Penny—who has her eyes on Yale—to date a nerdy classmate Penny calls a “blowhard”; Tommy, the football team captain Penny longs to have take her to the prom (which she initially rejects as being too “bourgeois”), ignores her. A young woman, Mary Anne (Ms. Kazan), arrives, her face badly bruised, and Agnes and Penny begin their usual, secretive procedure of welcoming, hiding, and caring for the woman; as always in such cases, there’s a chance her spouse may be following her, bringing danger in his path. Mary Anne is instructed to stay isolated in her room, and not to let any of the regular guests see her. Soon, Mary Anne bonds with Penny and, despite her own miserable experience with her husband (whom, foolishly, she can’t help calling), advises the strangely eager Penny—up to now a budding feminist—on how to land Tommy, teaching her the maneuvers that lead to a contrived development jarring with everything we’ve thus far learned about Penny; they would also set a radical feminist’s hair on fire.


We actually get to meet such a feminist in the person of Hannah (Cherise Boothe), a turbulent, college-educated black woman with an Angela Davis afro spouting the ideas of “political lesbian” Ti-Grace Atkinson. Hannah’s seeking the Gorgons, a group who’ve set up a cult-like lesbian commune nearby from which men are excluded. The commune is called Womynland, thus eliminating the contamination of “man” from its name. There is a man in the play, however, and it’s Paul (Patch Darragh), a songwriter taking a break from his strained marriage in hopes of being able to write songs here on the island.


Once these parts are in place the situations that arise, which seem more like set pieces than organic developments, set one character’s view of women’s place in the world, and how they should behave vis à vis the opposite sex, against another. (Men, those evil patriarchs, do not fare very well in this atmosphere, and Paul’s ambivalence doesn’t do much for men, one way or the other.) Each woman will become, if not a mouthpiece, then a representation of some aspect of early 1970s feminism during those days when, as the song said, something was happening out there.


The presence of Paul, who intrudes on the part of the house that Agnes considers her private space, will lead to largely foreseeable romantic and sexual consequences, while further complications will emerge from Hannah’s radical agenda. By the end of the play, all the relationships will have gone through several permutations, and Agnes will discover a part of herself she either didn’t know existed or that she kept hidden for fear of dealing with it.


All of this happens in a very realistic b&b kitchen-dining area, well designed by Scott Pask and nicely lit by Russell H. Champa, where Agnes seems always to be making muffins, cookies, or the like; there’s a sliding door at stage right leading to the rest of the house, a door upstage, a staircase next to it, and a sink with a window over it through which Hannah at one point enters and by which, needlessly, she tries to leave. Jessica Pabst’s costumes seem true to the period, and the girlish, but not especially appealing, dresses Penny dons in an attempt to follow Mary Anne’s advice, add an effective touch.


Ms. Jones, using the same rich Southern accent she recently employed in THE GLASS MENAGERIE (Agnes seems to come from Tennessee, like Ms. Jones), is, as ever, a formidable stage presence, fighting to protect her battered women, but fiercely demanding it be on her terms, just as she does when struggling to fill her maternal role with the newly rebellious Penny. Zoe Kazan shows many sides to Mary Anne, from frightened abused wife to too-smart-for-own-good adviser to Penny. As Penny, Ms. Saylor is every inch the anxious, insecure, and defiant teenager, not unlike the role she plays on “Homeland.” Now that she’s proved she can handle such roles, I look forward to seeing her in something completely different next time. Ms. Boothe and Mr. Darragh fill out the excellent ensemble by making something watchable of their unconvincing roles.


Sarah Treem’s credits include TV’s “In Treatment,” “How to Make it in America,” both of which I like very much, and “House of Cards,” which I still haven’t seen. She can certainly write, but WHEN WE WERE YOUNG AND UNAFRAID doesn't rank with her finest work.

Note: City Center Stage 1 provides assisted listening devices to those who need them.
Posted by Samuel L. Leiter at 2:34 PM