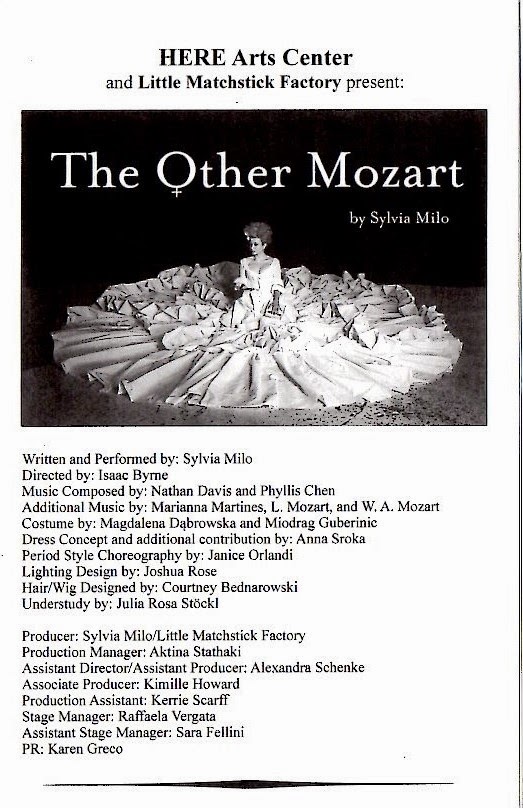 If you wonder how a single dress can make up the entire set of a play, wonder no longer, since the answer can be found at the Here Arts Center, where THE OTHER MOZART is playing. The white dress, designed by Magdalena Dąbrowska and Miodrag Guberinic, based on a concept of Sylvia Milo and Anna Sroka, is spread out in a circle 18 feet in diameter across the stage’s black floor, with dozens of handwritten letters scattered all over it. At center is Ms. Milo, the Polish-born actress who wrote and stars in her own one-woman play, directed by Isaac Byrne, about the early life of Maria Anna (or Marianne) Mozart, nicknamed Nannerl, the older sister of Wolfgang Amadeus Mozart. (The story is the subject of several novels and of a 2011 French film, MOZART’S SISTER, which title was used for an earlier showing of Ms. Milo's play.) Nannerl appears to have been as gifted a child musical prodigy as her sibling, but, because of contemporary mores, was forced upon reaching her maturity to abandon her musical career, marry, and raise children. “Leaning in” hadn’t been invented yet. 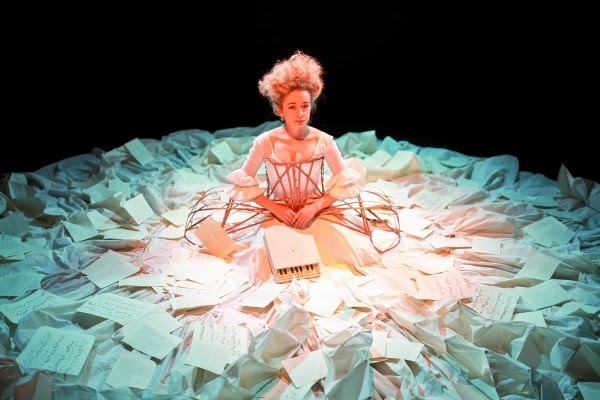 Ms. Milo, speaking in ever-so-lightly accented English, wears her thick, light blonde hair teased up in a high nimbus that surrounds her delicately featured face, creating the impression of a period cameo. Since Courtney Bednarowski is credited with “hair/wig” design, I’ll assume that Ms. Milo’s natural hair has been supplemented; the effect is convincing and both attractive and unusual, although not as bizarre as Nannerl’s hair looks in paintings of her. Ms. Milo stands or sits at the center of the dress wearing mid-18th-century white undergarments, consisting of a bustier and close-fitting knee-length bloomers, but she gradually dons panniers, a skeletal structure worn under a dress to greatly extend the hip line at either side, in keeping with contemporary fashion. By the play’s conclusion, she has inserted herself into the dress and rises, apparently lifted on some hidden device that elevates her and slowly moves her upstage as the dress enfolds her, allowing her to strike a triumphant pose just before the lights go out. The moment is visually striking and provides a lovely coda to the actress-writer’s presentation, in which she gives a multifaceted performance, sometimes childishly playful or petulant, sometimes tongue in cheek, sometimes poignant, and sometimes angry. She also offers the voices of others, including Nannerl's brother, father, and mother.


The text of this hour and 20 minute piece is not particularly dramatic, taking us on a pared down journey through Nannerl’s life, but it has enough juicy tidbits and historic commentary to keep us interested all along the way. Much of it is derived from letters sent to Nannerl, those strewn about her dress (and, later, showered from above and from the wings). Nannerl was something of a phenomenon, performing as a child for citizens and royalty “the most difficult sonatas and concertos of the greatest composers on the harpsichord or pianoforte, with precision, with incredible lightness, with impeccable taste.” After citing these words commenting on her playing in 1763, when she was 11, she adds, regarding her brother: “Even before that little shit-eater was born, I was playing.”


Nannerl’s proto-feminist commentary, written in crisp, easily digestible, bite-size pieces, some of them quite funny, takes us into the Mozart family, with Papa overseeing the musical and intellectual development of his remarkable children, but with Nannerl getting less support and recognition from him than does Wolfi (she’s got “talent” but Wolfi has “genius”). She takes us along on their concert tours, and gives us her impressions of the people and sights they see, especially the way women elsewhere behave in comparison with those at home in stultifying Salzburg. Peppered throughout are comments on contemporary biases toward women, seen as physically and intellectually inferior to men.


When she becomes of marriageable age, she is left behind while Papa tours with Wolfi, since it would have been considered improper for her to be performing when she should have been at home caring for a husband and family. She says she “screamed, retched and vomited,” but Mamma told her that henceforth music would be her “ornament,” a lure to capture a spouse. She tosses off excited sentences from Papa and Wolfi’s letters about the things they’re doing and seeing, but declares, touchingly, that her own letters were not saved because “There was nothing interesting in them.” She composes her own music, which Wolfi praises but Papa ignores, and remembers one of his friends comparing a woman composing to “a dog walking on its hind legs. It is not done well, but one is surprised to find it done at all!”


Nannerl’s performing days decline, but she keeps practicing nonetheless, playing at home in Salzburg with her brother when his career stagnates and he's forced to return home. When offers appear again, he leaves, this time with Mamma, while Papa stays behind and learns to appreciate Nannerl’s abilities, all the while hoping Wolfi will find a permanent appointment that will allow the family to leave Salzburg. Mamma dies while touring with Wolfi, and Papa is devastated; whatever his belief in her talents, he realizes that if he were to die she’d be lost. Nannerl and Papa meet Wolfi’s bride, Constanze Weber, who comes to Salzburg, and Nannerl offers her comical impressions of this shallow new family member and of the cloyingly silly way Wolfi and Constanze express their affection.


Wolfi falls ever deeper into debt, begs Nannerl and Papa to come to Vienna, and, finally, Nannerl, at 33, weds a twice-widowed baron, who already has five children, and lives in an isolated village. Life becomes a bore. Wolfi finds success, Papa dies, and Wolfi dies. Nannerl has three children with the baron before he, too, dies. Nannerl, now financially secure, returns to Salzburg, giving music lessons and handling the many requests for her brother’s work. She tells us what it says on her gravestone, “Marianna Anna von Berthold zu Sonnenburg. The Sister of Wolfgang Amadeus Mozart.” And then, she rises and seemingly floats away.


Ms. Milo’s performance is nicely complemented by the original music of Nathan Davis and Phyllis Chen, which uses instruments such as Nannerl would have played and successfully blends its modern sounds with recorded music by Marianna Martines (Mozart’s contemporary), Leopold Mozart (Mozart’s father), and Wolfgang Amadeus Mozart himself. Joshua Rose’s lighting design of constantly shifting hues and brightness levels adds immeasurably to the experience. But it's mostly Ms. Milo's presence, and her charming depiction of someone whose music was criminally overlooked, that makes this play worth a visit, regardless of what you know or think of the other Mozart.
Posted by Samuel L. Leiter at 7:53 PM