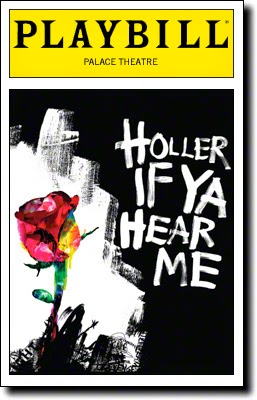 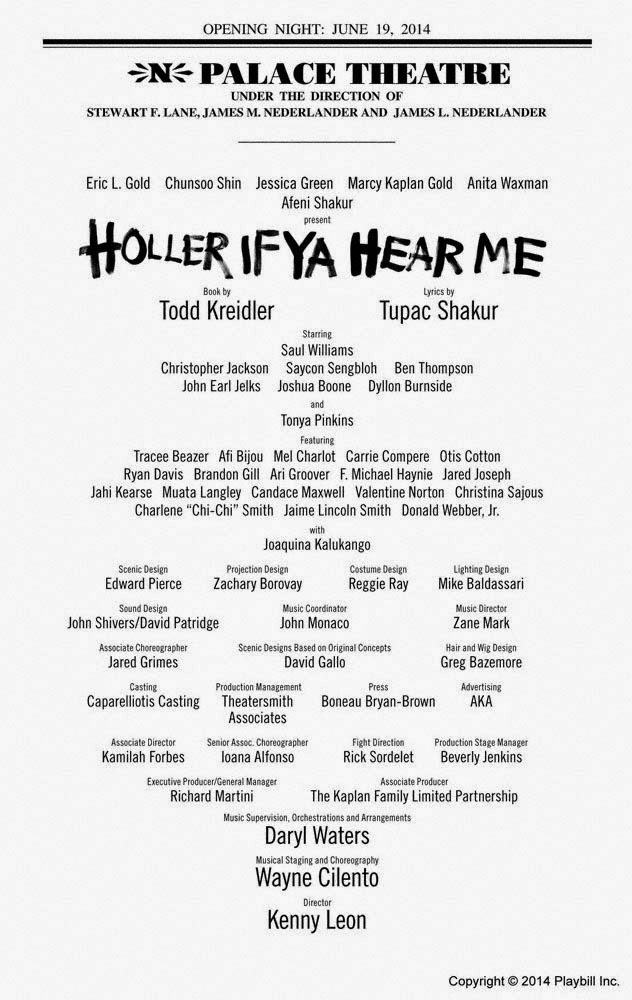 I’m someone who didn’t hear Tupac Shakur, so I never hollered when he was alive and I’m not about to start now. That’s not to say that I didn’t actually enjoy parts of HOLLER IF YA HEAR ME, the new musical at the Palace Theatre inspired by the lyrics of this leading rapper/actor (born Lesane Parish Crooks), killed 18 years ago in a drive-by shooting in Las Vegas at the age of 25. His impact was clearly enormous on the American music scene, and his fans continue to be legion and from all walks of life (like a former student, now a PhD candidate in England, who ran into me before the show). But rap never hip-hopped its way into my musical consciousness and Shakur, for all his success and his reputation for introducing social consciousness into his lyrics, stayed off both my radar and my radio. 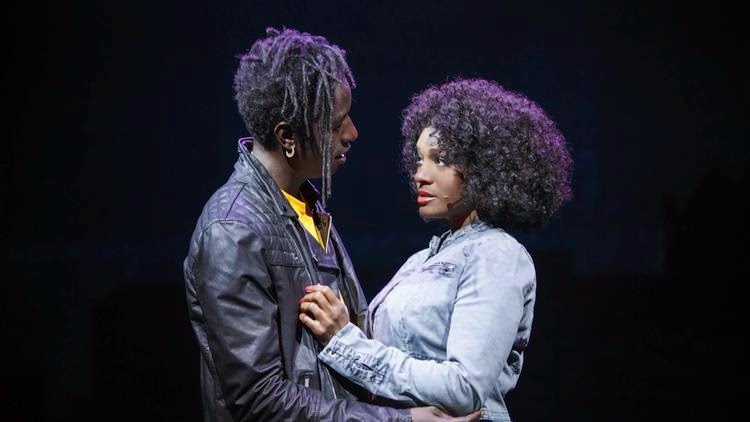 
Shakur’s lyrics are studied in college poetry courses, and there’s a library’s worth of critics who praise his writing to the skies, so I’ll accept these things on faith. On the other hand, I’m not convinced that, given the nature of the traditional Broadway audience, his work is what they’re looking for. Much as the show’s format didn’t work for me, however, I was grateful for the chance to experience Shakur’s words through the medium of a narrative, written by Todd Kreidler, that gives them context, even though the story is a cliché-driven inner city one that, at two hours and 20 minutes, is at least 20 minutes longer than it should be. 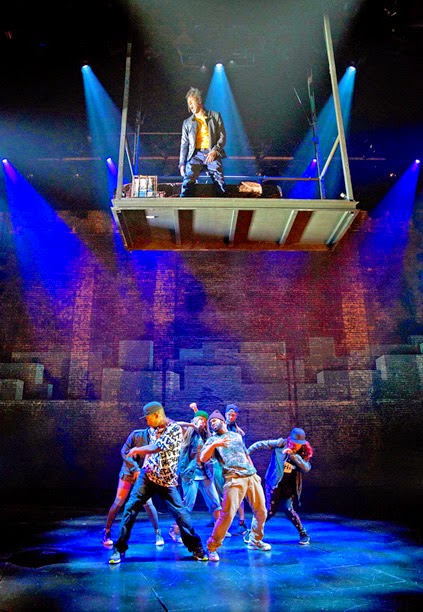 
Directed by recent Tony winner Kenny Leon (for A RAISIN IN THE SUN) and choreographed by Tony winner Wayne Cilento (for WICKED), the show would seem to have its ducks lined up neatly for success, even without a big star headlining the cast. The lead is played by a talented Broadway newcomer, Saul Williams, known for his slam-poetry, and he’s supported by well-known Broadway talents Christopher Jackson and Tonya Pinkins, among a company of mostly fresh faces. But its conventional plot about gangs and guns in a black neighborhood, and its and rap lyrics, with their profanity and racially provocative attitudes (we hear the “N” word over and over), may not be a recipe for success on the Great White Way.


Unlike BEAUTIFUL: THE CAROLE KING MUSICAL and other shows based on the songs of a famous writer or performer, HOLLER IF YA HEAR ME eschews the bio-musical approach in favor of a made-up but familiar tale of violence and vengeance on a ghetto block in an unnamed Midwestern industrial city. Tupac Shakur is present only in his words.
The central character, John (Mr. Williams), returns to the block after six years in prison, bringing his newfound insights gained from the writing of poetry to a world of drugs, promiscuity, and crime, from which everyone is struggling to escape. All John wants now is a paycheck and a place to lay his head; he’ll do anything to avoid going back to a life of crime, and isn’t excited about reuniting with his former pals. But he still carries a huge chip on his shoulder and, when, despite being an ex-con, he’s offered a job by Griffy (Ben Thompson), a friendly white guy who runs his dad’s body shop, he treats him like dirt. John’s friend Vertus (Mr. Jackson), who’s now dating John’s girl, Corrine (Saycon Sengbloh), is a drug dealer whose younger brother, Benny (Donald Webber, Jr.), gets killed not long into the show by a member of the 4-5s, a rival gang, and the plot then drags along as Vertus and his homies, desperately needing to bring meaning to this meaningless death, work out whether they should respond to the murder in kind. Through it all wanders a homeless preacher (John Earl Jelks), offering spiritual pronouncements. The tragic, if accidental, ending can be seen coming from miles away.


The story incorporates issues of justice, revenge, incarceration, social oppression, poverty, and racism. It struggles to find ways to incorporate Shakur’s songs into the narrative structure, so that “Dear Mama,” for example, allows for the introduction of Vertus’s mother (Ms. Pinkins), a character reflective of Shakur’s own mother, the activist Afeni Shakur. Other numbers fans will hear include “My Block,” “Life goes On,” “I Get Around/Keep Ya Head Up,” “I Ain’t Mad at Cha,” “Me Against the World,” “Whatz Next,” “Holler If Ya Hear Me,” “Thugz Mansion,” “California Love,” and “Ghetto Gospel.” The songs are acceptable on their own, but they don’t add much to the narrative thrust, and their ideas eventually begin to sound repetitive. Oddly, no specific person is credited with the often effective music; the program credits Tupac Shakur for his lyrics, but for music all it gives is “Music Coordinator” (John Monaco) and “Music Supervision, Orchestrations, and Arrangements” (Daryl Waters).


There are strong performances by Mr. Williams, Mr. Jackson, and the underused Ms. Pinkins (what a great voice!), the supporting ensemble dances and sings ably, and some numbers, like “Holler If Ya Hear Me,” powerfully led by Mr. Williams, and "Thugz Mansion," featuring Mr. Thompson, stay in your mind. But all the characters are stereotypes and there’s nothing that sharply differentiates them from others you’ve seen before on stage and screen.


Edward Pierce’s scenery is grim and dark, with minimal physical elements used to depict specific places. There are lots of sliding panels, brick walls, chain link fencing, and a suspended-in-air jail cell that doubles as John’s pad, but nothing is particularly imaginative. The most vivid image is of a vintage purple Cadillac that features late in the play and allows the cast to dance all over it while singing “California Love”; if you saw HANDS ON A HARDBODY two seasons ago, you’ll get the idea. The set proper is essentially neutral and much of the visual effect derives from the busy work of lighting designer Mike Baldassari, with the beams of multiple spotlights creating patterns of their own, aided by the projections of Zachary Borovay, which illustrate the sketches John is often drawing on his pad.


For some reason, the interior of the Palace Theatre, where the play is showing, has been reconstructed so as to provide risers that climb from the forestage to the balcony, hiding the actual orchestra seats below. This allows for a small staging area under the balcony (used for talkbacks and the like), which, if you’re seated on the new risers, you pass on the way to your seat. An usher told me this means there are at least 500 fewer seats available, but, with business reportedly being poor, it may not matter very much in the long run, which is something I doubt the show will have.
Posted by Samuel L. Leiter at 11:42 AM